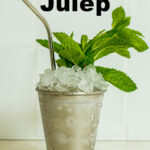 Popular with both horse racing enthusiasts and cocktail connoisseurs, the classic Mint Julep is inexorably tied to Kentucky’s annual derby. Read on to find out why you’ll love this bourbon smash cocktail even if you don’t fit into either category. Then follow our classic Mint Julep recipe to craft the tasty drink at home.

Until recently, we associated Mint Juleps with three things – the Kentucky Derby, southern belles and bonnets. We blame this association on fuzzy memories involving sorority girls wearing big floppy hats and sipping Mint Juleps at a New Orleans bar on the first Saturday in May years ago.

Fast forward to the present. After itching to craft Mint Juleps for months, we finally accomplished our goal. The issue was that we couldn’t find Mint Julep cups in our Lisbon, Portugal home city and not for lack of trying. After a lightbulb moment involving Amazon Spain, our problem was solved.

And guess what? We’re obsessed with the smashed bourbon cocktail that’s one of the easiest, tastiest and most refreshing sippers we’ve ever crafted at home. In other words, the classic Mint Julep has jumped to the top of our lazy mixology summer rotation.

What Is a Classic Mint Julep?

Typically served in a silver cup and requiring just four ingredients including ice, the Mint Julep is the official drink of the Kentucky Derby with nearly 120,000 people sipping Mint Juleps at Churchill Downs each May. That’s a lot of bourbon, fresh mint, sugar and crushed ice. Spoiler Alert – these are the only four required ingredients.

However, the classic Mint Julep is more than a novelty drink imbibed one weekend each year during the Triple Crown’s first leg. In addition to being the preferred drink for spectators watching 3-year-old thoroughbreds race around a track, the Mint Julep has a history that’s both long and distinguished. Plus, it tastes like spring in a cup.

History of the Mint Julep

Leave your historical assumptions behind when you drink a Mint Julep. Despite its ties to the Kentucky Derby, the cocktail’s original recipe wasn’t created in Kentucky and didn’t include bourbon.

Research reveals that the original Mint Juleps were crafted in Virginia for medicinal purposes as far back as the 1700s. Back then, patriots and tavern owners likely added rum to their cocktails. It wasn’t until later that gin and eventually bourbon became the liquor of choice for Mint Julep recipes prepared in the American South and beyond.

Once bourbon became the Mint Julep’s star ingredient, it was only a matter of time before the sweet cocktail became the Kentucky Derby’s official drink in 1938. With a dedicated bourbon trail, distillers like Buffalo Trace, Jim Beam, Woodford Reserve and Maker’s Mark produce more than 2 million barrels of bourbon in the Bluegrass State each and every year.

The Mint Julep’s prominence at the annual horse race has reached a point where more than 100 thousand thirsty souls happily shell out $15 for each cocktail. A more exclusive group of attendees pay $1000 and even more to drink their Mint Juleps in special commemorative Kentucky Derby cups (for charity, of course).

The ingredient list to craft a classic Mint Julep is incredibly simple with just the following four ingredients:

You’ll want to use quality bourbon since it’s the star of the drink. You’ll also want to use fresh mint and homemade simple syrup. However, you can buy bottled simple syrup in a pinch.

Buy a bottle of simple syrup from amazon if you’re not interested in whipping up a batch.

If you’re stressed about choosing the best bourbon for your Mint Juleps, don’t worry. Your favorite Kentucky bourbon will work just fine.

We like to use Four Roses since the relatively inexpensive whiskey’s balanced flavors provide the best bang for our buck. The Kentucky Derby’s organizers use both Old Forester and Woodford Reserve. You can’t make a bad decision with any of these bourbons or the one that’s in your liquor cabinet.

Buy a bottle of bourbon from Drizly or Total Wine if you live in the US.

How To Craft a Mint Julep

Despite its sophisticated appearance involving a metal cup and decorative mint sprig, the classic Mint Julep is easy to craft without any special tools or equipment. We use the following bartender tools in our recipe:

None of these tools is expensive and you likely have them at home. If not, you can easily find them at your local liquor store or online.

Buy a Mint Julep cup from Amazon if you don’t have one already.

Once again, finding the Julep cup was the most challenging part of this recipe for us. We finally gave up looking locally and ordered one online. Sure, we could have used a highball glass but the metal cup feels more festive.

The next step is to measure and pour simple syrup into a Mint Julep cup. If you prepare simple syrup in advance, it should stay fresh for a month or longer.

Pro Tip
Prepare simple syrup by boiling a 1:1 ratio of sugar and water in a small pot until the sugar dissolves.

Muddling the mint leaves and simple syrup is the most fun part of any Mint Julep recipe and ours is no exception. This step only takes a few minutes before the mint become noticeably fragrant.

Buy a muddler from Amazon if you don’t already have one. It’s a useful tool for this and other recipes.

The next step is to measure, pour and stir the bourbon. We like to use a Japanese jigger to ensure accurate measurements and avoid spillage.

Since our recipe calls for three ounces of bourbon, the end result is boozier than most Mint Julep recipes. While you may get a boozy hit when you take your first sip, the flavor will soften as the ice melts. Feel free to use less bourbon if you prefer a less boozy beverage.

Buy a Japanese jigger from Amazon if you don’t have one or want to make an inexpensive upgrade.

Adding crushed ice is the next step in this recipe. You’ll want to keep the ice in the freezer until you’re ready to use it so that it doesn’t melt. We’re fortunate to have a crushed ice maker on our refrigerator. If you’re not so lucky, you can crush your own ice by pulsing it in a blender or pounding it with a wooden mallet.

Pro Tip
Plan to use a lot of crushed ice. However much you think you need, you’ll probably need double that amount to fill your Mint Julep cup until it literally runneth over.

The final step is to mold the ice into a dome shape and add a spring of mint as garnish. We also insert a metal straw to create an earth-friendly sipping situation and recommend that you do the same.

Buy metal straws from Amazon for this and other cocktails.

Since this bourbon cocktail is deceptively potent, you’ll want to serve your Mint Juleps with plenty of food. We recommend keeping to theme with southern food favorites like the following:

Can you handle drinking a classic Mint Julep at home? The best way to find out is to follow our recipe and craft the boozy bourbon beverage in just five minutes.