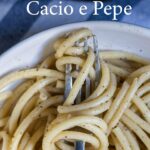 Our Bucatini Cacio e Pepe recipe is a deceptively simple way to use ‘what you have’ to make one of Rome’s best loved pasta dishes. After trying our method, you’ll be a Cacio e Pepe pro. Plus, it tastes great.

That was our initial thought when we encountered Pasta Cacio e Pepe in Rome during our first visit in 2010. The simplicity of the dish made with cheese and pasta intrigued and excited us. Plus, it tasted so good that we ordered it again. And again.

Ironically, the timing of that visit was the same year that Anthony Bourdain catapulted Cacio e Pepe to global prominence in his No Reservations Rome episode. It’s the first item Bourdain eats in his ‘too too cool for school’ black and white homage to Vittorio De Sica’s 1948 film Bicycle Thieves.

In the show, Bourdain reveals what seems like a simple dish where a bunch of pasta (typically tonnarelli) was artfully mixed with a combination of Pecorino Romano cheese and fresh ground black pepper. The only seemingly complicated element of that dish was the impromptu Pecorino Romano bowl the dish was served in.

The world fell in love with Anthony Bourdain’s favorite pasta. It looked pretty straight up and easy to make at home…. but looks can be deceiving.

The fact is that, if you don’t respect certain rules of chemistry, Cacio e Pepe just doesn’t work.

It’s with this knowledge that we embarked on a mission to conquer the most basic yet most confounding pastas of the famous ‘Roman 4’. To complicate matters, we decided to use bucatini, a pasta that doesn’t always release enough starch to create the desired magical emulsion.

It took us a few tries to master the recipe which we’re excited to share. But, first, we want to give Cacio e Pepe a proper introduction.

The History of Cacio e Pepe

With no definitive origin story, the history of Cacio e Pepe follows two different paths – one mythical and one realistic. The former involves shepherds who wandered into the mountain with wheels of cheese and pasta in their bags. But to us realists, that version feels like BS.

We live in the real world where Cacio e Pepe is likely a product of Roman restaurant kitchen culture where large pots of boiling starchy pasta water are always present. It only makes sense for a Roman cook, hungry for a meal break while working on the line, to toss tonarelli into a large pot of boiling water, mix the water with available Pecorino, add pepper and create an instant ‘meal for one’.

Regardless of its roots, Cacio e Pepe appears on practically every modern Roman restaurant menu. During our most recent visit to the eternal city, we had the thrill of watching our Cacio e Pepe mixed tableside.

We watched in awe as the server ground a ridiculous amount of Madagascar black pepper onto the pasta with a high-class electric grinder. The resulting dish was luscious and wonderful, making us doubt if we could reproduce it at home.

This doesn’t mean you and we can’t make a great plate of Cacio e Pepe. With a little knowledge and timing, producing sensational Cacio e Pepe at home is both achievable and almost as rewarding as eating in Italy.

Cacio e Pepe is a classic pantry recipe born of three ingredients – Pecorino Romano cheese, Pasta and Black Pepper. We could add starchy pasta water to the list but that’s a given.

Some chefs add Parmigiano-Reggiano as an additional ingredient for extra creaminess. It’s a cow’s milk cheese with the kinds of protein that soften, melt and integrate into starchy water more than sheepy Pecorino-Romano. We, however, chose to keep our recipe simple with just the three classic ingredients.

This is a weeknight recipe, not an event.

Pecorino-Romano is likely the most widely available imported Italian cheese, other than provolone, in America. If you go to a major city and there’s a dispenser of grated cheese on the table, chances are that it’s Pecorino Romano. Most Pecorino arrives from Sardinia but, if you can find Pecorino from Rome (usually the Fulvi brand), buy it.

For this recipe, we grate our cheese on the finest diamond setting on our box grater. There’s no issue with buying pre-grated cheese as long as it’s Pecorino Romano and as long as it’s fresh.

Click here to order a box grater from Amazon if you don’t already have one.

Black pepper, as long as it’s whole, typically stays fresh for a couple years. Some people choose to lightly toast their peppercorns before grinding them. If you’re tempted to take this extra step, we say go for it, but be aware that the impact is minimal on the pepper flavor of this finished dish.

Click here to buy a quality pepper mill if you don’t already have one in your kitchen.

Choosing the right pasta can be a challenge for this recipe. We chose to use bucatini pasta.

We really love the chew and heft that bucatini brings to a dish. There’s something about the hollow strand pasta that stands up better to the fattiness and big flavor of the cheese.

Our only issue is that bucatini isn’t typically as rough and starchy as pastas like spaghetti.

The initial brand of bucatini we used had a beautiful chew but just wasn’t starchy enough. We solved that problem by splurging on a boutique pasta with a rougher edge that left plenty of starch in the cooked pasta water.

Bucatini Cacio e Pepe is a simple dish to construct but a tricky dish to master. Once you get it right, our preparation will be a lazy weeknight favorite.

The first step is to grate cheese. When we say grate cheese, we mean grate a lot of cheese. To really get the impact of the Pecorino Romano, we recommend grating about 3/4 of cup with a little extra for serving.

Boil four to five cups of water in saucepan or wide skillet. We recommend a skillet with a handle. The handle will make it easier for you to use tongs to grab the pasta later.

About three to four minutes before the pasta is done, place a separate wide frying pan over a medium fire. This will heat the pan so you can finish the pasta and sauce.

Before removing the pasta, pour three to four ladlefuls of pasta water into the pan you’re going to use to finish the pasta. If you choose to use a colander, you’ll want to reserve about two cups of the pasta water.

Click here to buy the same All Clad pan that we use in our recipe. We swear by this pan.

Using tongs, move the bucatini to the frying pan with the reserved pasta water. Stir the pasta water through the pasta until it begins to thicken.

Once the pasta water has thickened (it should be slightly pale white), remove the frying pan from the heat and wait about 20 seconds. You’ll want to be sure that the pasta is off the burner or the cheese will coagulate and separate from the pasta water.

Gradually add the Pecorino Romano to the pasta. The cheese should blend with the pasta water and become thick and creamy.

Add black pepper to taste. We like to grind the pepper from a large pepper mill.

If you choose to pre-grind your black pepper, you’ll need about one to two teaspoons of cracked black pepper. The goal is to see visible flecks of pepper on every strand of pasta.

After serving the pasta in medium pasta bowls, the final step is to pour wine. We like to drink Italian wine when we eat Cacio e Pepe pasta at home.

This fruit forward beauty goes great with a wide range of foods, especially meats. That being said, we chose this ripe, luscious wine because of the way medium bodied reds, like this one, meld wonderfully with salty, sheepy cheeses like Pecorino Romano.

It’s a fairly acidic wine that cuts wonderfully against the creamy pasta. It’s next to impossible not to drink the entire bottle at one sitting.

Click here to join the Roscioli Italian Wine Club. The club delivers artisan wines like Vino da Rimessa to destinations around the world.