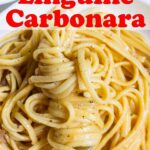 Seemingly simple Linguine Carbonara can be an exceptional challenge for home cooks. However, those willing to take a risk will achieve creamy, dreamy rewards. Our Linguine Carbonara recipe will give you the key to unlock this classic Roman pasta dish.

Carbonara. The Roman pasta dish is probably the most famous of the Roman ‘quadrinity.’

In essence, the creamy pasta is a synthesis, an advancement and maybe even an evolution past the age-old Roman classics Cacio e Pepe and Alla Gricia. Amatriciana is its own thing due to the addition of tomatoes.

The History of Carbonara

The origin of this dish remains a mystery.

Relatively unknown before the 1950s, there are many stories about how Carbonara came to be. Some historians trace its origins to the postwar American occupation when young Italian women ‘took notice’ of the GIs’ love for breakfast featuring powdered eggs and bacon.

Could Carbonara be rooted in seduction? It all sounds too good to be true.

Some people believe that the dish’s name derives from the black, coal-like flecks of pepper that appear in the sauce. Other origin stories include a restaurant in Rome by that name, a name for charcoal workers who ate the eggy pasta and a secret society in the early 20th century. Like we said, it’s a mystery.

We liken the dish to French Hollandaise sauce. But pork fat replaces butter in Carbonara while the goal remains to heat, emulsify and thicken the egg yolk pork fat mixture without the egg proteins snapping. Nobody wants the silky sauce to turn into a scrambled mess.

How To Make Linguine Carbonara

Ironically, there are even more ways and methods to prepare Carbonara than there are origin stories. When you ponder the cross-cultural origin of this dish, it would be misnomer the assume that there is one ‘right way.’

Yes. We’ve traveled to Italy… a lot. The boot is steeped in tradition and, when it comes to food culture, the Italians have a tendency to make more rules about food than the amount of cigarettes that they smoke.

“You can only drink a cappuccino before 11 am!”

“Ragu must only be served with ribbons of pasta, never spaghetti!”

“No pineapple on pizza ever!”

And in the case of Carbonara: “One can only use egg yolk in carbonara, never cream!”

On the last point we generally agree. But, if that’s the case, then why does one of the great chefs of New York, Andrew Carmellini, an Italian American no less, use cream?

Celebrity chefs like Gordon Ramsay betray the dish’s Roman roots by using Parmigiano-Reggiano instead Pecorino Romano. (Ramsay even uses mushrooms. Oh Dio Mio!!) Interestingly, the chefs at the famous Roman restaurant Roscioli use a combination of Pecorino and Parmigiano.

So, in other words, there are many ways to reach the promised land when it comes to cooking Pasta Carbonara. However, we think that for home cooks who only have to please themselves, it’s best to keep the recipe simple.

You may get this recipe right the first time. If so, congratulations! But that doesn’t mean you’ve achieved mastery. You may crank your stove a little too high or leave the pasta over the heat a little too long in the future.

On our last carbonara go around, we lost attention for just a moment and, sure enough, the yolks began to scramble. This could happen on your carbonara journey too. It’s important to understand your heat source whether it’s gas, electric HOB, induction or even a campfire. If you feel your pan is getting too hot, don’t be afraid to move it off the heat.

Pro Tip
Don’t toss out the Carbonara if it curdles a bit. Nobody will notice if you scrape off the curdles and the dish will still taste divine.

It also helps to mix and slightly temper your mixture over a little heat. We like to whip our mixture in a porcelain bowl over the boiling steam of the pasta water. Some cooks use a double boiler. The best method is up to you and your kitchen situation.

We like to use guanciale because, here in Lisbon, we’re able to get the good stuff. While guanciale is ideal for pure pork flavor, you can still use pancetta if you’re looking for flavor without smokiness. If you love the smokey flavor of bacon, you can use that too. As we always say: Your Kitchen, Your Rules.

Pro Tip
Cut slices from a large block if you opt to use bacon instead of guanciale.

We’re lucky to live in a country that sells eggs at room temperature. While it’s not absolutely necessary, you can warm your eggs by leaving them, whole and uncracked, in room temperature water for about an hour.

We like A LOT of black pepper in our Carbonara. Black pepper and egg? It just works. We add the pepper at the end since ground black pepper is most aromatic when it’s fresh.

While spaghetti is commonly the pasta of choice for Carbonara, we prefer Linguine Carbonara over Spaghetti Carbonara. The slightly thicker, ovular strands of linguine tend to hold up better against the rich, yolky fattiness of the sauce.

You could alternatively use a tubular pasta like rigatoni. However, make sure that the tubes are wide enough to accommodate the rich, eggy, cheesy liquid.

Begin by freezing the guanciale (or pancetta or bacon) for about 30-45 minutes. This step prevents the fat from melting in your hands and enables you to slice the meat thinly and evenly.

Cut the rind off the guanciale. (Do the same if there’s a hard rind on the pancetta.) We like to slice our guanciale about a 1/4″ thick.

Keep an eye on the pan and remove the pan from the heat if you feel that the meat is close to burning.

Break two eggs, separate the yolks and place the two yolks in a separate bowl with one whole egg.

Grate 1/2 cup of Pecorino Romano cheese. You’ll want to use the finest setting on your box grater. (This should be the setting with the diamonds.)

Click here to a box grater from Amazon if you don’t already have one.

Add the Pecorino Romano cheese to the bowl with the eggs and whisk until combined.

To begin the pasta, boil about 5 cups of water in a saucepan large enough to fit the pasta.

Important Note
While many recipes call for boiling the pasta in a large amount of water, we use less water for two reasons. First, a smaller amount of water takes less time to recover to a full boil once the pasta is added. Second, the density of starch is greater with less water, which creates a sort of loose slurry that thickens the sauce.

When using a long strand pasta like linguine or spaghetti, it may be easiest to use a 12″ sauté pan to boil the pasta. If, like us, you use a large sauce pan, you’ll still need to bend the long stranded pasta to submerge it all in a small diameter pan in a small amount of boiling water.

Either way, we prefer pans with long handles (like our All-Clad pictured here) since they make it easier to use tongs to remove the pasta from the water

Click here to buy the same All Clad pan that we use in our recipe. We swear by this pan.

While the pasta is cooking, position the bowl with the egg and cheese mixture over the boiling water and whisk with a fork, letting the steam from the pot gently heat and emulsify the egg/pecorino mixture. This positioning will help the cheese and egg mixture combine and thicken, preparing the sauce for its final step.

About three minutes before the pasta is fully cooked, raise the heat on the guanciale to medium high.

Add one to two ladles of the pasta water to the pot with the guanciale (about 3/4 cup.)

Once the linguine is cooked to just al dente (you can taste to check), use tongs to transfer the pasta to the pan for finishing.

If you choose to use a colander instead, you can move about 2 cups of the cooked pasta water to a heatproof measuring cup before draining your pasta. Though you may not need the water, it’s good to have some in reserve in case the sauce gets too thick.

Once the guanciale and pasta water are thoroughly mixed with the pasta, immediately take the pan off the heat and slowly add the egg yolk cheese mixture to the pan. Mix the pasta and egg mixture until the sauce emulsifies through the pasta.

You should see the bottom of the pan when you drag a wooden spoon across it. If you find that the sauce is a little thin, you can drag the pan on and off the heat. However, be careful not to leave the sauce over the heat too long. If you do that, the egg yolks will begin to curdle and scramble.

Add pepper to taste. We recommend adding at least a teaspoon or more so that the black specks are prominent throughout the pasta. This is not a recipe where ‘less is more’.

Serve Linguine Carbonara in individual pasta bowls. You can grate additional Pecorino-Romana on top of the pasta if desired.

When we began our relationship with the amazing Roman food group Roscioli, we emphasized our love for place-centric, affordable wines that go great with food. As it turns out, Silene, produced by Damiano Ciolli, just about hour by car from Rome, matches splendidly with our recipe and our budget.

We originally expected Silene’s Damiano Ciolli to be a white wine since that seemed like the most straightforward match to our pasta. Imagine our surprise when a light magenta liquid came flowing from the bottle. We even refrigerated the wine. Oops! But it was still wonderful chilled.

But, once we tasted this light bodied red, we were treated to a wonderful, food-friendly wine. Its earthy pinot noir-like flavors of mushroom meld with fruity flavors of cherry and raspberry in every sip.

As the skies shifted to a welcoming blue after a dank, rainy Lisbon winter, this wine’s light yet grounded flavors were an announcement that both spring and better times were just ahead.

Click here to join the Roscioli Italian Wine Club. The club delivers artisan wines like Silene to destinations around the world.

Carbonara is just one of four classic pastas found in Rome. Check out our recipes for Rigatoni Amatriciana Spaghetti alla Gricia now.

That is the easiest best tasting Carbonara I have ever made. I will make this again. Thank you

Thanks Debbie!! That's always a pleasure to hear.