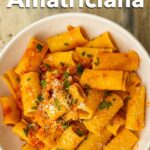 Follow our Rigatoni Amatriciana recipe and make the classic Roman pasta dish at home. It’s the next best thing to eating it in the eternal city.

Our history with Pasta Amatriciana goes back over a decade. It’s one of the dishes Daryl made for us when we were first dating. Needless to say, Daryl’s cooking was an unmitigated success. We’re still together.

Faithfully following the amatriciana recipe in Marcella Hazan’s legendary Italian cookbook Essentials of Classic Italian Cooking, he added pancetta, Italy’s cured, unsmoked version of bacon. To Daryl, back then, the idea of adding cured meat made the dish special and different from American pasta dishes topped with meatballs, sausage or even meat sauce (i.e. the American version of ragu).

Hazan’s recipe illuminated a new cuisine literally a world away from the heavily sauced pastas of our youth. Eating the dish was a revelatory experience in which the light chewiness of the pancetta and firmness of the pasta (in that case, bucatini) harmonized with tomato sauce to create wonderful culinary balance.

The History of Pasta Amatriciana

The actual history of Pasta Amatriciana is centuries old and can be traced back to the ancient town of Amatrice in the Eastern part of Rome’s Lazio region in Italy.

Legend has it that shepherds would carry chunks of guanciale and pecorino on long journeys into the mountains. They allegedly used these items to make a sauce which they then added to fresh pasta they’d make by wrapping a mixture of flour and water on wires.

While that pasta evolved into what we now call bucatini, we’ve included rigatoni in our recipe. The hearty bite of the chunkier pasta provides a wonderful counterpoint to the sauce’s porky flavor. We also diverge from the original recipe by adding sautéed onions. Sue us.

The original recipe also calls for white wine. While we love the zip and pop that wine brings to pan sauces, we believe that the highly acidic nature of vino distracts from the sauce’s porky flavors. We also believe that tomatoes bring more than enough soprano-like acidity and sweetness while not muting the low key, baritone-like flavors of the pork.

Over time, Pasta Amatriciana has grown into more of a Roman dish much in the same way that Boeuf Bourguignon has morphed into a Parisian dish. However, both dishes are made in the style of the place where they originated.

Without doubt, the people of Amatrice can claim that they invented Pasta Amatriciana before the dish became popular in Roman trattorias. We like to think that we’ve captured the spirit of this dish and, most important, the flavor.

Our Rigatoni Amatriciana recipe includes items found in most Roman kitchens. The primary ingredients are guanciale, tomatoes, an onion and rigatoni pasta.

As the years passed, one essential element of Hazan’s recipe remained in our minds. Hazan began her recipe by sautéing onions in olive oil. Why not render the pancetta first and use the fat from the pancetta to sauté the onions? Did she write the recipe that way to prevent the pancetta from burning?

The answer may be found in the key ingredient to any classic Pasta Amatriciana recipe – guanciale. Back in the day, outside of Italian specialty stores in cities like Philadelphia and New York, the cured Italian pork cheek called guanciale was relatively difficult to find in America.

Things have changed. Companies like 1732 Meats in Philadelphia, Salumeria Biellese in the NYC area and even La Quercia in Iowa offer excellent versions of the cheeky, fatty pork product via mail order and at specialty retailers throughout the country.

Note About Guanciale in America
The guanciale you’ll find in America is a little leaner than the product you’ll find in Italy. However, examples we’ve seen on the web seem to have enough fat for you to create a Roman-style product. That being said, these meatier, gamier meats will likely contribute a deeper flavor to the dish.

While it’s easy to spend less on generic dry pasta, we say spend a little extra and splurge on the good stuff. Generally, higher priced dry pasta, produced using bronze dies, has a rougher surface which grips the sauce better.

You’ll spend a dollar or two more but the difference is substantial. Your pasta will also have an al dente chew and and a distinct flavor.

Click here to order a bag of Italian pasta from Amazon if you don’t have access to good pasta where you live.

Since we live in Europe, we’re able to purchase tomato passata, a glass jarred version of tomato puree that tastes fresh and is easy to use. We can dump as much passata as we need into our sauce pot and we’re good to go. No smashing, no hand mashing, no squeezing and no problem. A jar typically costs just 2 to 3 euros and makes two to three meals.

But real Italian passata is expensive on Amazon. We hope this changes in the future but, for now, the best alternative to tomato passata in the states is canned tomatoes.

Click here to order Cirio passata from Amazon if you want to splurge.

Yes. You could messily mash your whole tomatoes by hand. We choose to use a potato masher. You won’t create as thorough a tomato purée but it’s neater and the tomatoes will eventually disintegrate as the amatriciana sauce cooks.

Click here to order a potato masher from Amazon if you don’t already have this useful kitchen tool.

How To Make Rigatoni Amatriciana

Our recipe starts with a simple set of five ingredients. In this recipe, we render guanciale to produce enough fat to sauté the onion and, of course, impart its flavor in the sauce. We also add a little chili flake for some zippy heat.

Finally, as in most Roman pasta recipes, we finish the sauce by adding starchy pasta water to emulsify the porky tomato mixture into a finished Amatriciana sauce.

Important Note
While many recipes call for boiling the pasta in a large amount of water, we use less water for two reasons. First, a smaller amount of water takes less time to recover to a full boil once the pasta is added. Second the density of starch is greater with less water, creating a sort of loose slurry that thickens the sauce.

Begin by freezing the guanciale for about 30-45 minutes. This prevents the fat from melting in your hands and enables you to slice the guanciale (or pancetta) thinly and evenly.

Be sure to cut the rind off the guanciale. (Do the same if there’s a hard rind on the pancetta.) We like to slice our guanciale about a 1/4″ thick.

Lay the guanciale flat in a cool 12″ frying pan. Turn the heat to medium high. Cook the guanciale until it just browns on the edges and the fat begins to render. You’ll use this fat to sauté the chopped onion.

Once the guanciale just begins to brown, immediately add the onion and crushed red pepper flakes. Sauté the onion until it’s soft and translucent.

Bring the heat down on the sauce to just keep it warm.

To begin the pasta, boil about 5 cups of water in a saucepan large enough to fit the pasta.

Note
We use rigatoni in this recipe. If you modify the recipe and use a long strand pasta like bucatini or spaghetti, use a 12″ sauté pan to boil the pasta. If you use a large sauce pan, you’ll still need to bend the long stranded pasta to submerge it all in the small amount of boiling water.

About three minutes before the pasta is fully cooked, raise the heat on the sauce to medium high. Once the rigatoni is cooked to just al dente (you can taste to check), use a spider or large slotted spoon (a slotted wok strainer works great for this) to transfer the rigatoni to the sauce.

You have two choices here. You can either move about 2 cups of the cooked pasta water to a heatproof measuring cup or leave the pasta water in your pasta pot to ladle into the sauce later.

Once the pasta is transferred to the amatriciana pan, stir the sauce through the pasta. Begin pouring the pasta water into the sauce when the pasta and the sauce are mixed,

As stated above, Pasta Amatriciana can be served with a range of pastas. Traditionally, the dish is served with bucatini but we chose rigatoni for our recipe. You can also serve the sauce with spaghetti or just about any pasta that tickles your fancy.

Remember you make the rules in your kitchen!

Nothing stands up to the acidity of a great tomato sauce like a local wine from Lazio. We enjoyed our Rigatoni Amatriciana with a crispy Cesanese d’Affile from that region. Aged for at least one year in concrete vats, this white wine made our solid dish taste even better.

We didn’t bring any Rome wine home with us since the eternal city wasn’t the final destination during our Italy food trip. Instead, we got this bottle through our partnership with the Roscioli Italian Wine Club.

Affiliated with the esteemed Roman restaurant group with the same name, Roscioli’s club ships artisan Italian wine to loads of countries including the US, the UK and our home base of Portugal.

We received our first bottles along with tasting notes and videos about the producers. If you love Italian wine and are interested in joining a wine club, you’ll want to explore joining this one.

To be clear, there’s nothing better than eating Rigatoni Amatriciana in Rome. However, making and eating the dish with our recipe will transport you to Italy even if just for one meal.