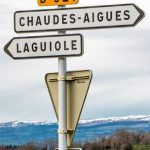 Visit Laguiole to experience the true France. From beautiful scenery to amazing cheese, this quaint village has everything that makes France so special.

The people of Laguiole possess a great amount of pride over their town’s authenticity. One sign on the main drag goes so far to proclaim that Laguiole is ‘the True France.’

Lacking a train station and without a comprehensive bus system, Laguiole is off the tourism radar. That’s not to say that you won’t see any tourists in Laguiole, but chances are that they’re mostly French.

How to Visit the True France in Laguiole

On the surface, aside from making a mecca to the great restaurant, Maison Bras, there are few obvious reasons to rent a car to visit this commune of 1,200 people.

But, like many under-the-radar attractions, Laguiole is worth a few hours of your time, maybe more if you want to hang out, throw a blanket on the side of the road and lay out one the best picnic spreads of your life.

We recommend that you do the following in Laguiole:

It’s a well-known fact that France produces some of the best cheese in the world. It’s a lesser-known fact that some of that cheese is produced in Laguiole. We didn’t understand this fully until we saw Aubrac cows grazing on the grassy meadows in and just outside of Laguiole.

Dating back to the 19th century, Laguiole’s cheese legacy enthusiastically continues but now with a coveted A.O.P. designation. Modern cheesemakers age the cooked and pressed raw milk cheese for four to 24 months and sell it in shops throughout the commune.

In order to make Laguiole cheese, cows are moved once a year from higher to lower grassland elevations in a process called transhumance. The annual process culminates in a big festival in late May which we hope to attend one day.

Ah yes, Aligot! We bought a box of the co-op’s take-home, refrigerated version of the stretchy, oozy mashed potato concoction, which easily survived our five-hour return trek to Lyon.

Pro Tip
If have access to a kitchen, buy a box of Aligo and pair it with Aubrac beef. This special, grass-fed beef is readily available throughout France. Ask a butcher for the faux-filet cut, which generously serves two.

Eat Your Way Around Town

Laguiole has some interesting low-cost dining options right in town. For example, Cafe Français sells French lottery tickets at the counter and offers salt-of-the-earth food like pintade – guinea fowl served with surprisingly tasty choucroute filled with bits of stewed carrot and cooked in duck fat – a customary preparation in Aubrac.

This is the kind of food that American tourists dream about eating in France – simple, fresh and finger licking good. It’s also inexpensive and uniquely French. When we finished our lunch at Café Francais, the server was more interested in eating his lunch than giving us dessert and the check – ahh, Vive la France!!

Cheesemongers and fine restaurants across the world serve cheese with knives produced by La Forge de Laguiole. This century-old knife maker manufactures specialty knives for cheese and kitchen tables along with hunting knives and corkscrews.

These aren’t the kind of knives we associate with cooking – we leave that to the Japanese and Germans. Laguiole knives are wonderfully decorated with fine handles made from cow horns and blades that curve into unique points and shapes.

Though a multitude of shops and boutiques sell these knives in the namesake town, why not visit the forge for a quick tour and knife purchase?

The forge’s self-guided tour lets visitors literally stroll through the factory and get an up-front view of the knife production. Workers sharpen and hammer new blades with precision, working the machines without even a glance toward curiously gawking tourists.

With historic photos and a fascinating display of knives, both old and new, the free tour is worth a quick stop. Admit it – a new ivory-handled Laguiole cheese knife would be a fine addition to that awesome cheese plate at your next cocktail party.

Click here to buy a Laguiole knife on Amazon. It’s the next best thing to buying one at the source.

Despite its gastronomic richness, Laguiole’s best feature may very well be the natural beauty that surrounds the quaint town. The Aubrac area is mountainous, with picturesque vistas at every twist and turn just outside the city center.

This beauty is why the Bras family set their compound up on a hill in this spot. And this is the reason why Laguiole’s piece of the ‘True France’ is worth a visit.

What could be better than using a new knife to cut locally purchased cheese and charcuterie on a lush field filled with wildflowers and stunning views of the Aubrac countryside, especially when you’re eating locally purchased baguettes, French pastries and wine?

We dare you to come up with an answer to this question as we don’t have one.

Read about our luxury dining experience at nearby Maison Bras.

Wow!!! My husband and I definitely would love this place. We are cheese and nature lovers:) Thanks for the info. xoxo