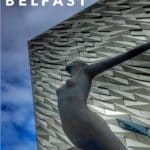 Belfast is famous for its tumultuous past, but Northern Ireland’s capital city has so much more to offer. We loved our first taste of Belfast, and you will too. There are so many fun things to do in Belfast!

We were immediately struck by the British influence in the city’s architecture and style, not to mention the currency. The more we explored, the more we discovered that Belfast has its own unique character, much of it formed during and after The Troubles.

We knew about The Troubles before our visit, but we didn’t fully understand the ramifications of the late 20th conflict between the Catholics and Protestants in Northern Ireland until we were in Belfast and saw the remaining walls and related street art in person. As it turns out, Belfast is more than The Troubles.

It’s a vibrant city that is not yet fully discovered by the hordes of tourists that descend on nearby Dublin. It’s also a relatively affordable city where you can eat and drink well without breaking the bank.

In other words, its our kind of city.

Fans of pop culture already know about Belfast’s connection to Titanic and Game of Thrones. Visitors will find it easy to both visit the city’s outstanding Titanic museum and venture beyond the city on Game of Throne tours to see many of the show’s most iconic sites.

As an added bonus, Belfast is now more affordable for Americans to visit due to the strong US dollar and the weakened British pound. Plan your trip soon! Trust us – you won’t be bored in Belfast.

Five fun things to do in Belfast

Not surprisingly, we spent much of our week in Belfast checking out the city’s food scene.

We read about Belfast on our initial British Airways flight to Europe in March. The article had not one but two blurbs about Northern Ireland’s Year of Food and Drink, which got our attention. Belfast wasn’t previously on our radar, but boy are we glad we read that airplane magazine and added Belfast to our itinerary.

The Belfast food scene embraces its local bounty of seafood and farm goods. Yes, there are potatoes, but that is just the tip of the iceberg. (Titanic pun intended.)

The walkable city has the wonderful St. George’s Market plus a lot of great places to eat from casual cafés to Michelin starred restaurants. Visitors will not be disappointed by the freshness of the seafood or the simplicity of a dish of champ – Northern Ireland’s version of mashed potatoes with butter, warm milk and chopped scallions.

Pro Tip
Don’t skip breakfast in Belfast. If you’re wondering where to eat the most important meal of the day, check out these great Belfast breakfast options.

2. Spend an Afternoon at Titanic Belfast

We were struck by the grandeur of Belfast’s most popular tourist attraction as we approached Titanic Belfast.

Located next to the Harland & Wolff shipyards where the famous (or should we say infamous?) ship was constructed, the large, ship-like, metal-plated building is a bold architectural work that evokes epic feelings worthy of great history. However, it’s what’s inside the building that is truly special.

Open since 2012, the hundred-year birthday of the fateful voyage, Titanic Belfast offers an interactive experience that is both educational and fun. We spent half of a day walking through the nine galleries and learning new things about the ship plus Belfast’s early history as a linen capital and later when it became shipbuilder Harland & Wolff’s epicenter.

Titanic Belfast presents the social and historical implications of the great ship’s sinking in vivid detail.

Titanic Belfast uses the latest modern technology to tell the Titanic story in ways that involve all the senses. However, we particularly enjoyed seeing some of the original plates used for all three classes on the ship and learning about the massive coordination of labor involved in building it, as well as hearing the stories about Titanic’s survivors and victims.

Pro Tip
Buy a combined ticket that includes entry to the SS Nomadic. The smaller vessel transported famous passengers including Charlie Chaplin, Marie Curie and Richard Burton and is the last surviving ship in the White Star fleet.

3. Tour the City by Foot or by Bus

Belfast is a highly walkable city with flat streets and wide sidewalks.

We like to walk a lot when we travel so that we can experience a city while burning off some calories at the same time. However, Belfast is also a good city to take a bus tour to learn the fascinating history of The Troubles and to see the peace walls.

These peace walls separated the Catholic and Protestant neighborhoods for safety reasons during The Troubles. As you will learn on a bus tour, these walls still exist today.

Pro Tip
Whether you’re walking or in a vehicle, be sure to enjoy the views from the River Lagan.

4. Check out the Street Art

Some of the city’s street art is colorful and peace-focused, while much of the street art is darker in both color and message. When touring Belfast, it’s key to keep your eyes open so you can check it out.

5. Take a Day Trip to See Game of Thrones Sites and the Giant’s Causeway

We weren’t originally planning a day trip to the Giant Causeway. We had thought it wasn’t necessary after our recent Western Ireland road trip, but missing Northern Ireland’s stunning coastline would have been a big mistake

Luckily, our ferry to Liverpool was canceled, giving us a day to take the Stones & Thrones – Game of Thrones Locations Tour. This tour took us to some key GOT sites plus more along the Giant Causeway.

Anybody who knows us knows that we were HUGE Game of Thrones fans. Seeing some of the show’s location sites was a big deal.

We geeked out while seeing where Aria jumped into the water after being stabbed and while poking around the caves where Melisandre gave birth to her “shadow baby”. However, the coolest GOT experience may have been strolling down the Dark Hedges Road with all of its crazy, intertwined trees.

In fact, seeing these sites inspired us to see more GOT sites and eat great food in Girona, Spain.

For us, though, the real highlights of the tour were the stops at Carrick-a-Rede Rope Bridge and the Giant’s Causeway. Though not featured in GOT, these are amazing sites to see in Northern Ireland.

Ironically, we were at the Giant’s Causeway the same day as the Queen but missed her by a few hours. It would have been cool to see her majesty in person, but settling for the chance to walk along the UNESCO site with its hexagonal rock columns overlooking the mighty sea wasn’t settling at all.

Now that you know some of the fun things to do in Belfast, you’re probably wondering where to stay during your visit. Wonder no more. You should stay at the most bombed hotel in Europe – the Europa Hotel.

The Europa Hotel may be notorious for being the most bombed hotel in Europe, but this elegant hotel has way more to offer than being the answer to a trivia question.

The hotel is in a perfect location for touring, just a short walk from many attractions and directly across the street from one of the city’s best pubs, the Crown Liquor Saloon. Like us, though, you may have to drag yourself out of the room with its big, comfy bed, free wi-fi and tea setup.

Breakfast is another bonus at the Europa Hotel. The hotel’s chef has elevated the typical hotel breakfast with the incorporation of locally sourced products like sweet butter and savory pork.

The bottle of Bushmills Whiskey at the oatmeal station takes the local sourcing over the top in a good way. Try not to smile after eating oatmeal laced with whiskey. We dare you.

Check out our food guides for Belfast and Dublin.

Sponsorship
We thank Tourism Ireland and Visit Belfast for their assistance with our visit.

The Titanic Belfast sounds quite interesting. Was it mainly reconstructions of the events or was it a lot of photographs and items collected from the ship itself? :)

Titanic Belfast interactively tells the Titanic story with photos, artifacts (though not from the ship itself), reconstructions and more. Visiting the museum is quite an experience - a retelling of history that brings a new perspective to the Titanic narrative.