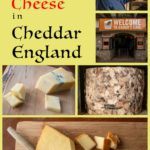 See what it’s like to eat cheddar cheese in Cheddar, the hard cheese’s homeland in Southwest England. If there’s a better London day trip for cheese lovers, we have yet to find it.

Within moments of entering Gough’s Cave in Cheddar Gorge, we encountered aging cheddar that was moldy, discolored and utterly alive. We had just ventured into the gorge’s deep, dark cavern with sounds of dripping moisture buzzing in our ears when we hit the motherload.

As bonafide cheese fans, we’d previously visited artisan cheese manufacturers in countries like France and Italy. Until our day trip from London, English cheesemaking was a bit of a mystery.

That being said, we weren’t ignorant about British cheddar cheese. After eating our weight in Montgomery’s Farmhouse cheddar back in Philadelphia, we were intimately familiar with England’s greatest contribution to the cheese world. However, we weren’t cognizant of cheddar’s full story until we visited Cheddar.

More than British cheese royalty, cheddar is an English village where food travelers can observe the cheddaring process and taste the end result. Unlike Narnia and Hogwarts, Cheddar is an actual place.

Watch our YouTube video to see us eat cheddar cheese in Cheddar, England.

Located just a few hours from London, the bucolic hamlet of Cheddar is famous for its cheese – and not just any cheese…

To nobody’s surprise, this tiny village in Somerset is the epicenter of cheddar’s history going back to the 12th century. However, Cheddar is a popular destination for cyclists and rock climbers due to Cheddar Gorge on the edge of the village.

A picturesque limestone gorge, Cheddar Gorge is dotted with caves that date back to prehistoric times. Beyond outdoor activities in the gorge, the main attraction of Cheddar Gorge is Gough’s Cave which, natural wonders aside, contains ideal conditions like humidity and temperature for aging cheddar cheese.

Pro Tip
Though you can plan a day trip to from London to Cheddar via train or bus, renting a car is the fastest and easiest option. Better yet, stay overnight and spend time exploring nearby Bath as well.

Our Visit to Cheddar

All journeys must start somewhere and our trip to Cheddar started with an early morning train ride from London’s Paddington Station to Bath. British trains tend to be highly civilized and this ride was no exception. Is it just us or is train travel the best travel?

Our hosts met us at the station and whisked us directly to Cheddar. Excitement built during the hour-long drive. We were about to eat in cheddar in Cheddar – the realization of a food travel fantasy.

Operated by John and Katherine Spencer since 2003, Cheddar Gorge Cheese Company is the only company currently producing cheddar cheese in the town of Cheddar. Since taking over the company, the married owners have moved the company forward with both an eye to the future and a healthy respect of the past.

“Making cheese is like golf. Every variance changes the end product.” With that simple statement, Marketing Manager Mark Brady summed up the cheddar cheese company’s approach to cheesemaking.

Recognizing that cheese is king, the company focuses its efforts around producing the best cheddar possible. This process which involves sourcing 2,000 liters of unpasteurized milk on a daily basis from Holstein cows that literally graze at a farm down the road results in the production of 70 tons of cheese each year.

Pro Tip
Don’t worry if you’re a vegetarian. The Spencers produce their cheese with vegetable rennet.

And the best part? Cheddar Gorge Cheese Company ages its cheese inside Gough’s Cave, one of the caves inside Cheddar Gorge. Not only is the process high on the coolness factor, but it also provides an added dimension to the flavor. Aging in a cave with a constant temperature of 12 degrees Celsius and a 98% humidity rate, this cheddar cheese is as authentic as it gets.

After meeting the Spencers and hearing their story, we were anxious to taste the cheese.

An ominous replica of Cheddar Man, the ancient skeleton discovered in 1903, greeted us as at the entrance to Gough’s Cave. Instead of being scared, we were excited to enter the dank cave and see where the Cheddar Gorge Cheese Company ages its cheese.

Careful not to slip, we ascended a rocky incline to view the aging cheddar in all its funky glory. Rows of cheese wheels, each approximately 25 kg, awaited us with dates, ages and weights listed on each. Cheesemakers turn these wheels weekly at first and then monthly during a maturation process which can be as short as five months or as long as two years.

As we learned, the constant temperature and moist conditions are ideal for aging cheddar cheese. “The humidity makes the real difference” allowing different enzymes to dominate the maturation process.

With this knowledge, we were even more ready to taste the cheese.

Although tradition mandates that this particular cheese be produced within 30 miles of Wells Cathedral in Somerset, cheesemakers produce Cheddar around the world. Unlike sparkling wine and Champagne, cheddar doesn’t have to be produced in Cheddar to be called cheddar. Regardless of location, cheddaring is what differentiates cheddar from other cheeses.

At Cheddar Gorge Cheese Company, the cheesemaking process takes seven hours before the cheese is pressed for another 54 hours. Cheddaring is just one part, albeit an integral part, of the multi-step process.

After we donned blue caps, we got a hands-on education on cheddaring. Not only did we observe seasoned cheesemakers cut, turn and stack blocks of curd that would later get cooled, drained and knitted together, but we also assisted with the cheddaring ourselves.

As part of the experience, we cut into curd slabs and stacked them in a noble attempt to keep up with the pros. Cheddaring is not for the weak, and, after our valiant efforts, we had finally earned the right to taste the cheese.

Smarter about cheddar, we were primed and ready to taste the end product. The fine folks at Cheddar Gorge Cheese Company were happy to oblige.

We sampled several signature cheddars starting with cave matured cheeses including one matured inside Gough’s Cave and an aged cheddar matured in the company’s production facilities. The cave matured cheese had a deeper flavor which provided an interesting contrast between the two.

Next, we tasted a vintage cheddar aged for 22 months with a drier flavor profile and hints of crystallization. We followed that cheese with the company’s award-winning oak smoked cheddar, notable for its flavor and smell reminiscent of a bonfire.

The final cheese, a natural blue cheddar, was the biggest surprise of the tasting. Created by a “happy accident” involving a crack in the edges, this cheese uses air to create edible blue magic.

As we nibbled on our bounty, we indulged in bottles of crisp cider, a worthy complement to the most local cheddar cheese in the world, Sure, we’ll continue to eat cheddar during our travels, but we’ll smile when we remember that time we ate cheddar in Cheddar.

During your stay, you can participate in caving, climbing and mountain biking. Or, better yet, you can chill, shop and eat cheese.

Check out cheese adventures in Saint-Marcellin and Emilia Romagna.

Sponsorship
We thank Cheddar Gorge Cheese Company for hosting us to facilitate this article.

This is such a great idea for a day out in England. I'm definitely going to suggest it to my friends. Cheers guys

I had NO IDEA! If I have time the next time I'm in London, Sean and I have to go here. I'm salivating by just looking at these photos. Growing up in the U.S., I knew about Wisconsin cheddar, but it wasn't until we moved to the Netherlands and the only cheddar we could buy was from England that we realized how incredible that cheese really is.

OMG! I love all cheeses and my mouth is now watering. What a great tour and educational experience...and a tasty one at that!