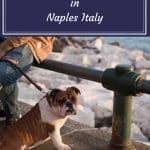 We couldn’t stop shooting pictures of cats and dogs in Naples Italy during our month-long visit to the Italian city best known for pizza and coffee. We couldn’t resist – they’re just so darn cute.

Naples Italy is a photographer’s dream – an ornate antique city built over ancient Roman and Greek ruins with a working-class population that screams Italy. Unlike tourist dominated cities like Bruges that exist in a vacuum, Naples has somehow avoided the forces of over-touristed gentrification.

With the exception of a few large thoroughfares like Corso Umberto, cobblestones line the ancient streets. Fancy medieval doors welcome visitors to buildings covered with graffiti. As we strolled the city, we often wondered what would happen if Naples were to clean up or ban the all-encompassing street art – but that would be a sin on the city’s awesome character.

Along with the ancient denizens who have called the city home for millennia are a crew of adorable cats and even cuter dogs who also call the city home. We can’t imagine a better place for alleycats to prowl than a city with alleys older than the Roman citizens who occupied them.

These lucky cats enjoy some of the most beautiful vistas on earth, walking along walls with breathtaking views of the Vesuvian landscape… And what landscape it is.

There is nothing like walking along the Neapolitan waterfront that stretches forever over the Sea of Naples.

To the right, islands like Capri and Ischia dwell as rocky impressions through the mist while, past distant waves, the peninsula city of Sorrento invites you to walk through its lemon tree alleys. At the center, the mighty Mount Vesuvius dominates the January vista with an innocent snowcap that belies its fiery past.

For many people, taking photos of the majestic landscape would be enough. But not us.

We were captivated by the animals who make the city their own. These cats and dogs walk with a stagger and have the attitude made famous by the mafiosa that used to rule the city. Though we specifically went to Naples to eat great Italian food in one of the top Italian food cities, we couldn’t resist the city’s furriest residents between meals.

Pictures of Cats and Dogs in Naples

Are the dogs in Naples aware of the beauty they’re born into? Probably not. They’re likely just begging for another slice of pizza. As for us, we were happy to snap pictures of these cute pets.

Life isn’t much different for the local cats. This cat seems to have found plenty of pizza and maybe some gnocchi. Life is good for cute cats and their canine friends in Naples.

Ah, yes. Naples and its home region of Campania serve some of the best food in the world. Naples is the home of great pizza and is the epicenter of the kind of simple Neapolitan food that has made Italian cuisine popular all over the world. It’s also a great city to enjoy Italian pastries, especially the Sfogliatella.

Naples and pizza may be forever intertwined, but the city also sports amazing seafood at fish markets around town as well as Neapolitan Pasta dishes like Linguine al Cartoccio.

Taking It to the Streets

However, reality intrudes sometimes. The Naples streetscape is filled with traffic that can lead to fatigue in both animals and humans.

The city’s alleys are narrow, causing scooters to compete with pedestrians for space. On crowded days in the Centro Historico, it’s not unusual to straddle a narrow sidewalk as the occasional Fiat attempts to fight its way through the crowd.

Unlike tourists, local dogs adapt to the Southern Italian lifestyle. They don’t complain. They just hop along for the ride.

While walking into our local supermarket we noticed a special white cat that seemed to enjoy a seat on the floor just past the checkout counter. This fat cat sat idly by almost as if it was working a day job guarding the market’s doors.

We wanted to grab a photo of this feline curiosity the moment we saw him. Unfortunately, due to the early hour of the day, we were not equipped with our trusty camera.

For two weeks we looked for this street-tough, feisty cat until we finally found him enjoying the afternoon between two parked cars on Via Padre Luigi Tosti. Don’t mess with this dude! His legs may be thicker than our arms.

While in Naples, we were also privileged to visit spots in rural Campania like the charming medieval town of Caiazzo where we enjoyed what is surely the world’s finest pizza at Pepe in Grani. While there, we also enjoyed wandering down dark, narrow, old alleyways twisting toward grand mountain views.

See what it’s like to eat the best pizza in the world at Pepe in Grani.

We wandered alone that day – just us and a solitary dog who watched us in sphinx-like solemnity on the ancient alley steps. This encounter was an added bonus to our pizza-driven day trip.

Pro Tip
Take a road trip while you’re in Naples – it’s one of the best ways to experience southern Italy.

Back in Naples, we wandered aimlessly among quiet, dark alleys lined with brass balconies on decaying buildings. These battered walls convey a beauty that’s purely human.

This is a city that has survived batttles and volcanic eruptions. It would be a shame to clean up and repair the humanistic structures that define the city or the pit bulls that protect its proscenia.

It would also be a misnomer to only characterize Naples as a gritty, hardscrabble city. As you travel west, across the bay to neighborhoods like Chiaia and up the city’s super steep hills to Vomero, the character of Naples transforms.

These Napoli neighborhoods possess much of the city’s wealth as shown by the high priced shops and commanding, towering views of the bay.

It’s always fun to stroll down thoroughfares where pampered dogs strut their stuff next to fine Italian leather boots. After admiring the finery, stroll down one of the high-class boulevards and stop for a break with a sfogliatella or gelato. In Naples, there’s always time for a coffee break.

Black Cat for the Road

Once your active day is ended and you’ve walked over 20,000 steps (like we did on many days), it’s time to settle down and chill with a glass of local wine, Aperol Spritz or Negroni. Pick a piazza, find a cafe, stretch your legs and relax.

But, on your way, keep your eyes peeled for the occasional black cat. Don’t let it cross your path!

Have we convinced you to visit Naples and pet all the cats and dogs? There are great hotels in Naples at every price point. Once you decide where to stay in Naples, you can start planning the rest of your trip.

Hungry for Pizza in Naples?

Check out our Naples Pizza Guide with the best pizzerias in the city. It’s a highlight of eating in Italy.

Life is not good for cats in Naples. I rescued a litter from a horrible trash dump colony in 2000 and brought them to the states. All of the cats in the colony were gravely ill. The locals I met did not believe in spaying and neutering. The cats were left to scrounge in the heaps of toxic waste and trash dumped illegally by the mob, my colleague saw a cat impaled on an object while scrounging for food in a large pile of waste. Recently when the area around Mount Vesuvius was set ablaze, it was discovered the arsonist had doused cats with lighter fluid, set them on fire, and then dropped them as they ran frantically away taking the fire with them, to their horrible, painful deaths. I just lost my last of this litter I rescued, and while I am brokenhearted, I am so glad I got her away from a place where animal life doesn't even rate any effort, because not even human life has value. The cancer rates there have skyrocketed due to the illegal dumping of toxic waste.

Stefani - The city's trash problem has largely been mitigated in the 17 years since you rescued the cats in 2000. We've heard stories about the city's legendary trash and waste disposal problem but the Naples we visited earlier this year was a far different, and cleaner, place. We don't know about dumping around Vesuvius. Thanks for reading.

Gorgeous pictures! I love cats and dogs - I had cats, now I have a dog :) I love the photo with the black cat!

Very cute! I couldn't stop laughing though about you mentioning not able to stop taking pictures of cats and dogs. We had exactly the same experience in Cyprus. The only difference - it was all about cats. There were so many of them full of character, independent or just cute.

It looks like dogs of Naples use similar mode of transportation as in Taiwan. Precariously sharing scooters with their masters is quite amusing sight.

The pic of the Dog on Steps is epic one...