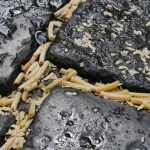 Disclaimer: This article was originally published in 2014 and reflects our initial impressions of the city. We have since returned to Naples twice including a one-moth visit in 2017 and a one-week visit in 2020.

Naples is a rough jewel meant to be explored. With its gritty neighborhoods and some of the best food in the world, Naples is a real Italian city.

We exited the stratosphere, breezing through fluffy clouds into low altitude, as the landing wheels sprung from our small Lufthansa jet. Just then, through the airplane window, our eyes glanced upon the massive Mount Vesuvius – majestic in its steaming grandeur and the source of power and fertility in Naples.

Our Arrival in Naples

We strolled off the plane into the tiny Naples airport, passing by a touristic mozzarella di bufala stand to be greeted by our hotel driver, Pierre. After a short walk through the minuscule (by most airport standards) parking lot, we hopped in Pierre’s car and headed toward our hotel in the center of the city.

On approach, as we drew closer to the ancient buildings, we were caught in a maze of scooters, pedestrians and fellow motorists. The car slowed, and, in what seemed like an interminable trip, we crossed each thoroughfare with increasing slowness like a canoe stuck in a river of tar.

Just then, Pierre asked us if we had been to Italy previously.

“Sure. We were last in Italy a few years ago,” we said. “And where did you visit?” he asked as he patiently drove through the rush hour anarchy. “We visited Rome, Bologna and Florence when we were last here.” we explained. “Oh. Those cities are Italy,” he stated with a cynical French accent.

And so it goes for poor, hapless Naples. What was once the second largest city in Europe has been reduced to an afterthought to many travelers, and that’s a shame.

Yes, there’s not a wall untouched by graffiti. Sure, there’s more litter on the ground than there was in Philadelphia in the 1970’s. True, crossing the street, even at a crosswalk, can be a life-risking endeavor.

But Naples could be the most genuine city in all of Italy with its ancient corners, dark alleys, bitter Italian coffee, delectable Italian desserts, passionate (and yes friendly) locals and most of all… fabulous Neapolitan food.

The long hot summers and pure volcanic slopes of Vesuvio produce some of the best fruits and vegetables the world has to offer from fragrant aromatic basil to the long, plump San Marzano Tomatoes that have become the world’s tomato sauce standard.

Add to that some the best pizza in the world plus amazing pasta and seafood. It’s no wonder that we quickly fell in love with this great, ageless volcanic metropolis that belongs on a one-week Italy itinerary for food travelers who want to visit the best Italian food cities.

During our time in Naples, we saw a resurgence of civic pride. We first noticed this as we strode off Via Foria toward the center of the old city.

We stopped when we noticed some pasta littering the cracks of a small cobblestone street just off the main drag. Of course, we had to take a photo.

To our surprise, our camera snap was greeted by the disapproving glance of a local shop owner. This was not the image he wanted us to share with our American cohorts.

In a sense, Naples is a real Italian city – the image we in America most closely associate with the boot.

Shop owners sell their wares in the streets as they have for centuries. Women still sweep the ground in front of house stoops. Master craftsmen continue to apply their skills despite the throngs of cruise ship tourists who enter the city every day. And people walk their cats and dogs all over the city.

And while many of those tourists quickly and cautiously breeze through the city on their way to the ruins of Pompeii or to the nearby seaside vistas of Sorrento, Capri and the Amalfi Coast, we were more than happy to stay in Naples. In return, Naples welcomed us like an old yet somewhat sophisticated Italian grandmother.

And so began our ongoing love affair with Naples.

Hungry for Pizza in Naples?

Check out our Naples Pizza Guide. It’s a highlight of eating in Italy.

I have been traveling to Naples (from Japan) since 2009. In most years I have gone there twice a year to teach university students. Each of my stays lasted 10-14 days. I am offended to read about litter in the streets worse than Philadelphia. Naples is hardly a “poor, hapless” city. Far from it. These initial comments in your review eclipse the rest of the article. Apart from an overly romanticized vision of pasta in streets and women sweeping sidewalks, the review does not give readers an honest or accurate picture of Naples, I’m afraid. Why not focus on how welcoming and gregarious people are? The diversity of neighborhoods—from 18th-century stone structures to hillside modern buildings? The hundreds of churches (about 500) to visit, starting with the historic Duomo? The splendid Capidomonte Museum? The exquisite Catacombs of San Gennaro and San Gaudioso? Let alone, the rich diversity of food, which you touched sparingly on in a previous post?

I feel that you have left out the heart and soul of this ancient city, which both France and Spain envied and took possession of at different times. I do agree that Naples is the “real Italy,” but, then, so are Siena, Florence, Siricusa, and all others. Italy is as diverse a country as any other, yet it is not Africa—a comment that disparages both Italy and Africa. I think you need to re-visit the city.

@Daryl and Mindi Hirsch, Thank you for responding. It’s much appreciated. I actually enjoy reading your blog and should have made that clear. For the places I’ve also been to—e.g., Vietnam, Cambodia, Japan (where I live), etc.—your reviews are inviting, no doubt.

With regard to Napoli—and southern Italy, in general—I’m a bit protective since my grandfather emigrated from Campania in 1908. The comment about Africa bothered me mostly because it is uncommon to hear notwithstanding that there are hundreds of immigrants from Africa now living in Napoli. In all honesty, I’ve never heard a comment like that once in all the time I spent in Napoli. I think including it in your blog gives potential tourists a wrong, even negative, impression.

I love your review of pizzerias and find it true to life. Pizzeria Concettina ai Tre Santi is connected to a rich neighborhood revitalization effort that I just wrote about in another comment. Its Michelin star is a source of great pride to local residents. So glad you found it.

I look forward to more of your interesting reviews! 👍🏽

Albert - We've been back to Naples twice - once for an entire month in 2017 and again in 2020. This article was originally written in 2014 - something we've now noted in an update. However, please note that the quotes about Africa were from the host of our bed and breakfast in 2014. We don't feel the same way. We've also traveled extensively throughout Italy and understand the complexities of the nation from north to south.

Naples continues to be one of our favorite cities for food, art and history. If you read carefully, we've noted our love for the city during this initial visit. We're now among Napoli's greatest advocates.

Any visit to Italy is not complete without a week in Naples. What impressed me was how reasonable the costs were compared to up north. My wife and I walked the streets after dark in the old city and never felt in danger.

1) Visit Pozzuoli too, there is a wealth of Roman empire there.

2) Watch out for your wallet in Naples, especially at train stations and in small streets.

Naples is absolutely an Italian gem. It’s the third biggest city in Italy and has everything a person would need: beach, country, views, museums, art (Banksy has even left his mark there), Napoletano music culture, sport, churches, subterranean, food, shopping, parks and I could continue. It amazes me that I haven’t been there before. It is such a rich city and I can’t wait to see it rise again to be the pearl of Italy that it should be.

I really didn't know about Naples before but your description sounds good for me. I am currently planning to go Italy for a road trip. Will Naples will be good for that. Thanks for this post, very informative.

Naples would be a good spot to either start your road trip or ditch the car. I would not attempt to park around the city since parking is most likely limited. There are plenty of car rental spots near Piazza Garibaldi or you could rent a car at the airport. If you already own a car in Europe and you must park in Napoli, you could do some further research about parking lots, etc. That being said I definitely would avoid driving around the Centro Storico. We hope you have a great trip!!