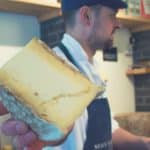 See why a three-hour London Food Tour is a tasty way to learn about London’s gastronomic history.

London has felt like a second home to us during our worldwide travels these past 16 months. We love the vibrancy of the city, not to mention that the fact that the locals all speak English, albeit with a British accent. This may be a surprise to some of our readers, but we also love the food in London.

Every time we stay in London, we enjoy exploring the London food scene, especially the plethora of global foods like Vietnamese Pho, Chinese Noodles, Japanese Ramen and even Indian Curries. We always seem to end up eating our way through the bustling Borough Market and trying new London restaurants.

To be honest, there’s so much to eat in London that it can be overwhelming, even for us. From pub food to fish & chips not to mention fine dining, London has quite the happening food scene.

But where did it all start? We wanted a local expert to educate us about the history of London food and point us to the best places to taste the city’s historic flavors.

We know quite a few Londoners, but none fit this bill. That’s how we ended up taking a London food tour.

We decided to take a London food tour as a crash course on British cuisine. We were previously skeptical about food tours, but we’ve learned during our travels that we can enjoy food tours when we do thorough research to find good tours and book the tours through reputable companies like GoBe.

But Berry Bros & Rudd is not a typical liquor store. Open since 1698, the store has been supplying wine and whiskey to the Royal Family going back to the glory days of King George III as well as to regular folk like us.

Despite its collection and selection of vintage wine and spirits, the store sells quality potables at all price points like the proprietary King’s Ginger liqueur that we tasted. The store also sports a private collection of special wines that are not for sale and are only drunk at special occasions at the shop’s discretion.

Sensing our interest in historic details like the Royal seal of approval on Berry Bros. & Rudd’s building, Owen walked us through the nearby hat and shoe shops.

Fascinating steps back in time, these shops cater to royalty and tycoons from all over the world – with the prices to prove it. We would never have seen these fashion stalwarts had it not been for the London Food Tour.

As we walked through the Piccadilly Arcade, we stopped at Ladurée. Though we rarely say no to macarons, we opted to share a palmier (affectionately referred to as elephant ears in some circles). Even still, we must admit that Ladurée’s macarons make the world’s best rainbow.

Sensing our hunger, Owen whisked us to Fortnum & Mason, a historic food emporium in the heart of London. Dating back to 1707 and frequented by the Royal Family, Fortnum & Mason is a mecca for all sorts of food items like colorful marzipan as well as a wide selection of coffee and tea.

Fortnum even sells honey made from hives on their own rooftop. Along with their endless selection of jellies and jams, the honey selection is dizzying.

We discussed how many of the food items were originally introduced by countries that England colonized back in the day. Ironically, England did not have access to tea, coffee or chocolate until the explorers brought these food items back to the motherland.

Owen also explained the history behind the famous hampers, the store’s signature product and a popular Christmas gift item.

To us, though, the real magic of Fortnum & Mason happens downstairs where the fancy food store transforms into a vibrant market. Owen walked us through the fresh vegetable section and introduced us to the butcher who explained how he uses salt bricks for curing.

Before we knew it, we were learning about Scotch Eggs – the British delicacy that involves breaded sausage wrapped around a soft-boiled egg. We had eaten Scotch Eggs before but never in their original home. Yes, the folks at Fortnum & Mason invented the Scotch Egg – a piece of trivia that will bolster our growing library of world food knowledge!

Fortnum & Mason was the main course of our London food tour, but it was only the beginning of our exploration into British food history. Luckily for us, the next part of the tour focused on two of our favorites – chocolate and cheese.

As part of the tour, we stepped into a Roald Dahl novel when we entered ‘Wonkalike’ Prestat, a London chocolate shop that dates back to 1902. Since the whimsically decorated shop is famous for its Napoleon III truffles, we had to try this signature truffle filled with dark chocolate ganache and dusted with cocoa powder.

Though we enjoyed the pure flavor, we opted to take some salt caramel truffles to enjoy later. After all, they are the shop’s most popular flavor.

Though we’ve long appreciated British cheeses like Montgomery’s Cheddar, Stinking Bishop and Stichelton, we never had occasion to visit Paxton & Whitfield, London’s oldest cheese shop that opened back in 1797. It was a delight for us to check it out but even better to sample the different cheese options. We especially enjoyed tasting the store’s Cerney Ash Cheese, an unpasteurized goat cheese.

We often visit Neal’s Yard Dairy when we’re in London, but always the Borough Market location. Thanks to the London Food Tour, we finally made it to the central London store located next to the actual Neal’s Yard – a small square where the modern London food movement started and where Neal’s began selling cheeses in 1979.

This chain of stores can rightfully call itself the best, most comprehensive cheese store in London with a selection of new cheeses that always pushes the envelope sold by some of the most knowledgeable cheesemongers in the world. While there, we not only tasted the classics but new cheese sensations like Baron Bigod, a soft, creamy, brie-like beauty that gives French cheeses like Brie de Meaux some serious competition.

Since London is a true melting pot of international cultures, a London walking tour would be incomplete without addressing the city’s multi-cultural cuisine. We talked about international cuisine with Owen as we sipped on coffee at Nordic Bakery and then walked in and by shops like Lina Stores, a small yet comprehensive Italian food specialty store and Gelupo, a popular gelateria.

These shops have origins far from London but are now part of the city’s culinary fabric. Sadly, we didn’t have the time or stomach space to eat at all of the tempting establishments.

On the upside, we’re now more knowledgeable and can hit all of these spots when we’re back in London. Trust us, it will happen sooner than later.

Hungry for More in London?

Check out the iconic London food favorites to eat during your visit. Then check out our favorite London markets and our picks for the best British candies.

Thanks for explaining what your food tour was like. You mentioned you researched your options before deciding what tour you wanted. It seems important to really consider what you want to see and eat on the tour, especially if that could affect where you would want to go.

Good to know more about of London food tour. Thank you for sharing this article.

Approximately how much money spent for food tour in london?

There's a wide range of prices based on the different tours. Check the website link on this page and you can view various options.

London has so many amazing food places. We've been to loads and haven't tried any of the ones you've mentioned here. This tour seems like a really good one. We'll have to check it out next time we're in London. ?

You went to several of my favourite places, looks like she hit all the right places in your three hour tour. We like food tours too, such a great way of finding more of the gems than you usually manage if you have limited time on your own!

This is good to hear from a Londoner such as yourself!