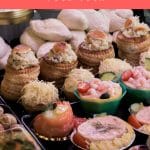 If you’re curious about Paris’ food scene, we recommend taking a Paris food tour like the one we experienced in the St. Germain des Prés neighborhood.

Our recent trip to Paris was short – just four days. We’ve done many of the typical touristy things (Louvre, Eiffel Tower, Père Lachaise Cemetery, etc.) on previous trips to France, and we wanted to do something different.

As we quickly learned after overloading on the city’s amazing art museums, there are a lot of unusual things to do in Pairs beyond the museums. Options include visiting one of the world’s most historic cemeteries to shopping for antiques at a Parisian market.

After researching these activities and other fun things to do in Paris, we decided to take one of the many food tours in Paris. Although we love to travel, we don’t usually love to travel with groups and culinary tours are not usually our thing.

So, it was with mild trepidation that we booked a Paris Baguette to Bistro tour. Let’s cut to the chase. This Paris food tour was awesome.

Tour guide Cassandra Choi masterfully curated our Paris walking food tour from beginning to end, not only enlightening the small group of participants on Paris’ prodigious food scene but also allowing meaningful dialogue about the role that food plays in our lives.

This was not some dumbed-down tour, but rather a total experience that gave us a taste of Paris while stimulating our minds along with our palettes.

Pro Tip
Come hungry to the Baguette to Bistro tour. This Paris tour is filled with some of the best food in Paris. Keep reading to see what we ate during the tour.

We began the tour with a brisk 25-minute walk from our centrally located apartment to the meeting spot in the charming St. Germain des Prés neighborhood. Arriving a few minutes early, we didn’t wait long before we were warmly greeted by über competent, adorable tour guide Choi.

A native Californian, Chio discovered her passion for pastries after moving to Paris for culinary school. Yes, our Paris tour guide was a pastry chef who lives and works in the city – the perfect person to give us the kind of inside culinary scoop that we appreciate.

Maison Guyard – Married to the Season

Within seconds of us walking into Maison Guyard, shop matron Colette greeted us with tastes of the traiteur’s award-winning foie gras. The creamy bites melted in our mouths and left us wanting more.

That shouldn’t be a surprise since the shop is literally loaded with a variety of house-made foods ready to be taken home and eaten that night – some of the best Paris food like escargot, pâté en croûte, smoked fish terrines, vegetable terrines, quenelles en brochet and boudin blanc.

We had fallen in love with the emporter concept while we lived like locals in Lyon, but we didn’t truly understand the traiteur concept until this Paris food tour. Choi explained that a traiteur is a shop that sells takeaway food, designed to be eaten at home with minimal additional preparation work and cooking.

These shops seem similar to the prepared foods section of a supermarket but so much better. It’s hard to imagine all the intricate preparation involved with the large variety of items at a shop like Maison Guyard and their enormous variety of sausages, terrines and salads – it’s clearly a huge, coordinated effort.

Maison Guyard takes the traiteur concept to a higher level by only selling fresh foods that are “married to the season.” Like Colette, the owners respect French traditions, local products and their customers.

Through Choi, we learned the fascinating history of the humble baguette from its early 20th century origins. When the French government changed labor rules to prevent bakers from working straight through the night, the invention of the slender, quick-rising baguette allowed bakers to have bread ready for sale to early morning customers.

We also learned that the literal translation of baguette is wand. (Trivia: Chopsticks are called baguettes in France, too.) This makes perfect sense to us since a baguette is a magical instrument, albeit one that must be eaten within a day of purchase before going stale.

Choi also taught us about the four ingredients in a baguette and provided a great tip for repurposing stale baguettes. We’d tell you the tip, but that would spoil the tour.

Getting Cheesy at Androuet

Did we mention that we love cheese? We feel passionate about the stuff and believe that France makes the best cheese in the world. We have a love affair with France, and cheese is a big part of our passion.

Androuet is a cheese shop with a respected MOF (Meilleur Ouvrier de France) designation. Open since 1909, the shop ages its cheese in basement caves. We peeked into the tiny shop and ogled at the myriad of fromage openly displayed without glass barriers. After breathing in the fabulously pungent scent, we stepped outside to a picnic.

Yes, we tasted several French cheeses along with Paris baguettes and saucisson that Choi had just purchased at Maison Guyard and Eric Kayser. We’re not talking your basic cheddar.

On this tour, we feasted on 32-month aged Comté, truffled Brie from Sauvignon, a Roquefort blue cheese, washed rind cow cheese from Burgundy and chèvre (goat cheese) infused with thyme and lemon from Provence. Each cheese was perfectly ripened by affineur Androuet and downright delicious.

Since Daryl worked as a cheesemonger in a previous life, Choi graciously let him explain the cheeses to the group. It was a special moment that only a competent, mature tour guide could orchestrate.

Androuet has multiple locations in Paris. We visited the location at 37 Rue de Verneuil, 75007 Paris, France.

We were feeling a bit thirsty after our savory picnic, so a drink was in order. Normally, we might drink some wine to fill our alcohol quota. But on this Paris food tour, we drank Armagnac, a regional French brandy distilled from wine made with four grapes and then aged in oak barrels.

We never tasted Armagnac before this Paris food tour. Thanks to Choi and Ryst-Dupeyron, a century-old negotiant, we have now filled that hole in our culinary repertoire.

Tasting a selection of Armagnac, including a 20-25 year blend and a 1979 batch, gave us a quick education in this special type of brandy. Ryst-Dupeyron sells Armagnac bottles dating back to 1868.

As a bonus, they personalize labels for gifts. Plus, the old line wine shop sells all manner of spirits including whiskeys, port wines and a huge selection of dry wines from top-shelf producers.

For us, entering Jacques Genin was like entering Parisian confectionery heaven. The swanky shop artfully displays an eclectic assortment of chocolates with options like chestnut honey, Schechuan pepper, gingerbread, almond praline and more.

We have a thing for French pastries. After eating trendy eclairs from L’Eclair des Génie, we were ready to taste more, and insider Choi guided us to some of the best in Paris.

At tiny La Pâtisserie des Rêves, pastries are whimsically displayed under glass domes. Browsing in the shop was like a dream – a dream filled with classic yet modern Millefeuilles and Financiers along with beautiful new cakes like the pristine white Gran Cru Vanille.

These pastries are among the most stylish and pretty that we have seen in all of France. Choi saved us a taste for later. We couldn’t wait!

La Pâtisserie des Rêves has multiple locations in Paris. During the tour, we visited the location at 93 Rue du Bac, 75007 Paris, France.

Last Bites of the Paris Baguette to Bistro Tour

Choi ushered us to the nearby park and started passing out chocolates and pâtes de fruits from Jacques Genin. We tried some of her favorites – basil dark chocolates, rhubarb pâtes de fruits and mango passion fruit caramels.

The Pâté de Fruits were like none we’ve ever tasted. These were not just sugary jellies but cubic essences of fresh fruit with deep, concentrated flavors. After the confectioneries quickly disappeared, Choi then passed around pieces of a huge Paris Brest from La Pâtisserie des Rêves.

Were the last bites of the creamy, sandwich-like pastry good? Let’s just say that we returned to the left bank patisserie for more the next day.

As we sat under the trees and enjoyed the sugar high, Choi continued to share her Paris cuisine knowledge with our group of eager food lovers. We lingered, chatting and sharing stories until it was time for us to depart for an afternoon of Paris fun. We left the tour feeling smarter about Paris food culture and overjoyed to meet a new friend in Choi.

The Paris Baguette to Bistro tour impressed this pair of food tour skeptics. We’re eager to discover more food tours in the future. Until then, we will keep eating baguettes, pining for the French ones, as we continue to taste the world.

Hungry for More in Paris?

Check out our Paris Pastry Guide with 40 of the best Paris pastry shops, boulangries and chocolate shops.

Sponsorship
We thank Context Tours for hosting us to facilitate this article. Click here to schedule your own Paris food tour.

A delicious experience!! Food is such a social event and it's equally good when people.have the opportunity to interact with other food lovers.

Thank you for your visit in our shop 79 rue du Bac 75007 Paris. It was a pleasure to welcome you and to share with you an Armagnac and Wine Port tasting. Hope to soon you in our shop.

This is the most beautiful and well articulated blog post I have ever seen.

I would love to take this tour! All of the food looks amazing, and I love that you learned so much as well. Food is such an important part of a country's culture!

This looks just amazing. I'm going to be in Paris for the first time in over 10 years in September and I've been seriously considering a food tour. Seems like a great way to soak up the culture, especially in a culture as serious about food as Paris!