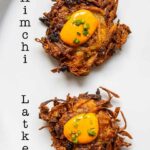 Our easy Kimchi Latkes recipe adds a Korean twist to the traditional Jewish holiday food favorite. Once you make these creative pancakes for your Hanukkah celebration, you’ll want to eat them all year round.

Kimchi latkes represent the evolution of our culinary journey.

We both grew up eating potato latkes each December during Hanukkah celebrations in Atlanta (Mindi) and Philadelphia (Daryl). We each helped our mothers grate potatoes and chop onions as part of the traditional latkes recipe that also includes eggs and flour. Then we’d eat the latkes topped with either applesauce or sour cream.

Fast forward to the future. After marrying in 2007, we later became nomadic in 2016 and didn’t celebrate Hanukkah for three years while we were on the road, though we ate plenty of Asian food. After we moved to Lisbon, we discussed creating an Asian pantry for a year but, as happens, we were too busy traveling to follow through on that plan.

Then came 2020. Once we were grounded by the global pandemic, Daryl fulfilled his dream by purchasing a carbon steel wok and filling our cabinets with sauces and spices from China, Korea, Japan and Thailand. And now we’re ready to celebrate Hanukkah yet again.

Purchase your own carbon steel wok from Amazon.

Latkes are fried potato pancakes that Jewish people have been eating as part of the annual Hanukkah celebration for centuries. The traditional latke recipe includes onions, flour and eggs in addition to potatoes. Recipe variations include ingredients like sweet potatoes, beans and cheese.

Our latke recipe contemplates these traditions but takes a left turn. Not only do we add kimchi, but we also incorporate a non-traditional cooking method recently introduced in Joan Nathan’s “Pure Potato Latkes” recipe in the New York Times.

After following her recipe and topping the resulting potato latkes with sour cream and smoked salmon, we agreed that Nathan’s recipe was nothing short of a latke game changer. However, adding kimchi and dollops of gochujang sour cream is our Asian twist to this modern latke recipe.

Anybody who has previously eaten Korean food has probably eaten kimchi. The fermented vegetable dish is an integral part of Korean cuisine.

Some over-achieving cooks create their own kimchi by fermenting vegetables like cabbage, carrots and radishes along with Korean spices like gochugaru to make kimchi in their home kitchens. Others buy the Korean food staple at Asian food markets or online. As for us, we were gifted a jar of homemade kimchi from the owners of one of our favorite Lisbon pizza joints.

We like to create easy recipes and this one is no exception. Accordingly, our kimchi latkes recipe only requires the following ingredients:

Pro Tip
Though not required, herbs like chives or scallions add a nice touch.

How to Make Kimchi Latkes

Making kimchi latkes is both easy and fun. The process starts with baking two russet potatoes in the oven. The next step is to slice the baked potatoes in half.

Once the potatoes are cut, the next step is to grate the flesh of the spuds using a large grate setting. We use a box grater to grate our potatoes.

As always, we’re careful not to cut ourselves, using the flat palm of our hands against the skin of the potato during the grating process.

You’ll just need a medium mixing bowl and a spoon to mix the grated potatoes with chopped kimchi, salt and freshly ground pepper.

While we recommend adding both salt and pepper to your personal taste, there’s no need to add too much of either since kimchi provides a funky burst of umami.

Pro Tip
A good pinch of kosher salt will do if you’re unsure about the quantity.

The next step is where the fun comes into play. This is when you literally roll up your sleeves and form the latkes.

Although this step only takes a few minutes, the kimchi latkes need to chill in the refrigerator for at least four hours but no more than 24 hours before the step that elevates these Korean potato pancakes to Golden Brown Delicious (GBD) status.

You guessed it. After waiting four to 24 hours, it’s now time to fry the pancakes. But first you need to heat the vegetable oil on high until it reaches 350°F or 175°C in temperature.

Pro Tip
Use an instant read thermometer to achieve the correct temperature.

Upon reaching 350°/175°, drop the latkes in right away and keep the heat on high. The temperature of the oil will drop.

Pro Tip
We recommend cast iron for frying latkes because of its non-stick properties. However, any thick metal skillet should work.

Pro Tip
Fry four kimchi latkes at a time. This will give you adequate space when you flip each with a spatula.

You’ll be tickled pink with the final product though you’ll be tempted to eat the kimchi latkes before they cool on a rack. Don’t do it. You’ll also want to add dollops of gochujang sour cream before you take your first bite. That you should do.

Gouchujang, another Korean ingredient, makes our recipe pop. With respect to tradition, we mix the pungent red chili paste with sour cream, a staple of Eastern European cuisines. Daryl originally proposed mixing applesauce with sesame oil but Mindi thought he went a little too far down the Jewish-Korean rabbit hole with that rejected idea.

We highly recommend using gouchujang since it completes this recipe. If you don’t have any in your pantry, you can always order a tub online. Sour cream should be easy to find at most grocery stores.

Order a tub of gouchujang from Amazon.

We also recommend pairing kimchi latkes with an amber craft beer, though any beverage will work. And don’t forget to eat donuts for dessert since the sweet treat is another traditional Hanukkah food favorite.

Just made this with my wife and we loved it. The gochujang sour cream is the finishing touch. Thanks for sharing!

Thanks Nick!! We're glad to hear that you enjoyed the recipe and hope that you're surviving this challenging year.

Gochujang is one Korea's greatest contributions to the culinary world. I (Daryl) remember working an event called StarChefs in NYC featuring some of the best chefs in the world and, at the event, every chef received a swag bag that included a tub of gochujang. Mindi loved it.