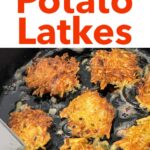 Potato Latkes are a holiday treat that we enjoy every year and you can too. With our Potato Latkes Recipe and a few simple ingredients, you can whip up tasty potato pancakes that any Jewish grandmother will love. And guess what? You’ll love them too.

December is the time when gifts are exchanged, daylight grows short and the temperature turns cold. And, if you celebrate Hanukkah, it’s also the best time of year to eat Latkes.

We’ve seen all manner of Latkes – Latkes with leeks, Latkes with carrots, sweet potato Latkes, cinnamon sugar Latkes and Latkes with curry. We even created a recipe for Kimchi Latkes for those times that we’re feeling spicy.

But what about the kind of Latkes that your bubbie made when you were a kid? Those Potato Latkes were crunchy and simple with a little bit of onion and a whole lot of potato flavor. They also went especially well with sour cream and applesauce.

Fear not if you lost your grandma’s Potato Latke recipe or you’re afraid to attempt making Potato Latkes yourself. Our recipe proves that you can make traditional Potato Latkes with a little elbow grease, a few simple ingredients and basic kitchen tools. It’s a recipe that you’ll go back to again and again even when it’s not the holiday season.

What Are Potato Latkes?

Put simply, Potato Latkes are potato pancakes that are served at Hanukkah celebrations. But, unlike typical flapjacks which you may eat for breakfast any day of the year, Potato Latkes are discs of grated potatoes held together in crunchy webs with just a little bit of binder. We use egg as a binder in our Potato Latke recipe.

You may wonder why Jews have been celebrating Hanukkah with Potato Latkes for over a millennium. Explained briefly, oil- based foods are the center of the holiday’s celebrations around the world since oil plays a central role in the Hanukkah Miracle. In Israel, where Sephardic traditions predominate, Jews celebrate Hanukkah with small jelly donuts called Sufganiyot while Ashkenazic Jews of Eastern Europe get credit for Latkes.

It’s estimated that Latkes have been around in one form or another for over 1000 years. The version we know today probably emerged after the 1500s when potatoes were ‘discovered’ in the New World. No one really knows what the Jews of Eastern Europe fried before potatoes. Some guess that their original Latkes may have been made from some form of cheese. Yes, cheese.

Whatever was in the ancient Latke recipe doesn’t really matter now that we all have access to potatoes. There’s nothing comparable to munching on a crunchy, savory web of fried potatoes with a little bit of sour cream or applesauce on top.

Here’s all you need to make Potato Latkes with our recipe:

You probably have all the ingredients in your pantry since our recipe forgoes the use of fillers like matzo meal or flour. The ingredient list is so short that you’ll probably commit it to memory after following the recipe once or twice.

Assuming that you don’t want to eat your Potato Latkes with ketchup since that would be wrong, we recommend gathering the following items before you start cooking:

We tested our Potato Latkes recipe with both Yukon gold and russet potatoes and, while both types of potatoes work in this recipe, we prefer russets for their starchiness. Plus, russet potatoes are easier to grate and peel.

You can use standard white or yellow onions for this recipe. Generally, half a medium to large onion (about a half a cup) is enough for each pound of potatoes.

We chop our onion fine instead of grating the onion. Finely chopped onion intermingles with grated potato beautifully.

Pro Tip
It’s important to use a sharp knife when chopping your onion.

Our Potato Latke recipe requires one large egg for each pound of potato.

Pro Tip
Beat the egg before adding it to the grated and wrung potato and onion mixture.

We like to lightly sprinkle some salt on the surface of the Potato Latkes once they’ve left the frying pan.

Adding table or kosher salt brings flavor to the party. Noting that salt types vary, we recommend 3 grams of fine salt for each pound of potato to guarantee even distribution.

Pro Tip
Take your Potato Lakes to the next level by sprinkling a flaky salt like Maldon on the finished potato pancakes.

Although the Gourmet Magazine recipe that inspired our Potato Latkes recipe called for the use of small quantities of Olive Oil and constant refilling, we use vegetable oil instead. Vegetable oil has a higher smoke point and doesn’t burn so easily. Half a cup of vegetable oil should be enough to make about 14 Potato Latkes or even more.

How to Make Potato Latkes

We adopted our Potato Latkes recipe from Ruth Reichl’s yellow Gourmet cookbook after testing versions using a box grater and a food processor. We also tested yellow Yukon gold potatoes and brown russet potatoes as well as different approaches of spreading and frying potatoes in the pan.

Our final recipe contemplates the ingredients, tools and methods that resulted in the tastiest Potato Lakes.

Hand Grating vs. the Food Processor

In other words, our gratings from the food processor were a little too thick and tasted raw in our finished Potato Latkes.

Buy a box grater from Amazon if you don’t already have the handy kitchen tool in your kitchen.

Yes, grating by hand can be a bit hazardous. We recommend holding the potato with a kitchen towel while grating to minimize the risk of cutting your fingers. We also recommend using the largest hole on the box grater.

Pro Tip
Soak the grated potatoes in cold water for a few minutes to wash off some of the potato starch.

As stated above, you’ll want to chop your onions in the smallest dice possible with a sharp knife. If you cut your onions in a small dice you won’t need to mince them. Check out a great video from YouTube chef Helen Rennie for more on dicing onions without a lot of trouble.

Buy a chef’s knife from Amazon if you don’t have one or want an upgrade.

Wringing Out the Onions and Potatoes

You’ll need to wring the onions and potatoes out with a towel once they’re chopped and grated. This step eliminates much of the moisture which is important since oil and water don’t mix well. Adding a too-wet mixture to the frying pan creates a splattering mess. Splattering hot oil is also dangerous.

Pro Tip
Move the potatoes and onions to a bowl once you’ve wrung out the moister. You’re ready to fry once you add a beaten egg.

We like to use a 12″ cast iron pan in this and other recipes. Cast iron is an excellent insulator and provides consistent heat and browning. We heat the pan first and then add the oil. Once the oil is hot, 350°F / 177°C or higher, you can add begin frying the potato pancakes.

Buy a cast iron skillet from Amazon for this and other recipes.

Once your oil is heated, add the potato mixture 2 tablespoons at a time forming 3 to 4″ pancakes. Make sure that your pancakes aren’t too flat when they’re formed. They should look like pancakes, not chips. You also want to avoid any stray pieces of potato in the pan.

In about 5 minutes or after the edges have browned, flip the pancakes. As they fry, the oil should make a steady sizzle.

Drain the fried potato pancakes on a plate lined with paper towels. Sprinkle them lightly with a little bit of salt.

Once they’ve drained for a couple minutes, place the Potato Latkes in a preheated 250°F / 120°C oven. The oven will not only keep your Potato Latkes warm, but the heat of the oven will enhance their crispness.

Repeat as you fry more Latkes in the pan.

Serve Potato Latkes on a plate with sides of both sour cream and applesauce.

Mindi eats her Potato Latkes with ketchup when nobody is looking but, shhh!, don’t tell anyone!

What are Potato Latkes?

What type of potatoes are best for Potato Latkes?

Russet potatoes are the best potatoes for Potato Latkes but you can also use Yukon Gold.

What is traditionally served with Potato Latkes?

Applesauce and sour cream are the traditional Potato Latke toppings.

What kind of pan is best for frying Potato Latkes?

A cast iron pan is ideal for frying Potato Latkes since cast iron maintains a steady temperature. This will insure excellent browning.

Potato Latkes are an excellent source of carbohydrates and fat and can be enjoyed in moderation. You could hypothetically bake Potato Latkes to make them healthier but they won’t look or taste quite the same.

What about a cocktail pairing? For pure tradition's sake, chilled vodka shots are probably best, but I would probably go with an Old Fashioned.