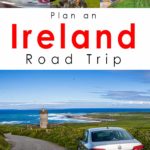 The best way to experience Ireland is by car. Join us on our west coast Ireland road trip to see where we went during our magical one-week adventure.

That warning repeatedly echoed in our zippy rental car as we drove along the winding roads of the Wild Atlantic Way during our recent Ireland road trip. Our hearts missed a beat every time a big tour bus careened toward us, forcing our vehicle to veer over as far to the left as was safely possible on the narrow two-way Irish roads.

The adrenaline nervously rushed through us, but it was worth it. We saw so much more than we would have by train or by bus.

We gazed upon some of the most beautiful landscapes in the world, detoured for local food and breathed in more than our share of hospitality and charm from the wonderfully welcoming Irish people. Plus, despite the speeding tour buses, we successfully returned the rental with nary a scratch or ding.

After spending two weeks eating our way through Dublin and experiencing urban life along the River Liffey, we itched to see the Irish countryside. People in the USA speak of Ireland so fondly, often waxing poetic about the green rolling hills, the lovely people, the lilting music and the tiny leprechauns. Okay, the leprechauns are a fantasy. We know. Or so we’ve been told.

But we wondered: Was Ireland really that spectacular?

This year, we’ve seen amazing sites like the infinite Grand Canyon with its embankments that disappear into nothingness, the Rhine River’s majestic castle crowned cliffs, the gorgeous rolling countryside of Aveyron and the Eiffel Tower in Paris. (Who could forget Paris!) Could Ireland’s storied West Coast compete favorably?

Our Verdict
Ireland’s west coast is one of the most beautiful places in the world.

We were blown away by everything we saw and ate during our seven-day Ireland odyssey. At times we felt like we were in a fantasy land filled with the most picturesque vistas imaginable.

At other times we would have sworn that we were on a different planet – one with a terrain totally different from that of planet earth, teeming with flora and fauna that exploded before our eyes – as we explored many of the top things to see and do in Ireland.

Our Ireland road trip took us through through the green carpet of the Dingle Peninsula, the rock tiled Burren whose cracks allowed all manner of purple and yellow flowers to jump through them and the hills of Connemara where the Connemara Black Face sheep graze along grassy hills that overlook the Lakes or ‘Loughs’ that define the County Galway. We constantly exclaimed “it’s so green!” all week-long because it really was so green.

Why Rent a Car for an Ireland Road Trip?

We highly recommend renting a car and creating your own route just like we did. Driving a rental car gave us the freedom and flexibility to see the best sites at the best times of the day.

We were able to coordinate our schedule with the weather, doing our best to avoid rain and optimize the blue skies. We could linger longer at the most special spots, go off the road to gaze at some of Ireland’s top castles and even drive an hour out of our way for an ice cream cone.

Sometimes, the most memorable moments on a road trip are the small ones when you go off the trail and take time to chat with locals or even eat an ice cream cone. Make sure you build time into any road trip for these moments.

Highlights of our Ireland Road Trip

A week sounds like a long time, but it’s not really so long when you consider the many amazing spots on the Emerald Isle’s West Coast.

We carefully plotted our journey and started with a detour to Cork for lunch before we drove west to Dingle. During the week, we visited County Kerry, County Clare, County Galway and County Mayo before we ended our trip back in Dublin.

Each destination was special in its own way. These are our favorites and the spots that must be included in any drive along Ireland’s Wild Atlantic Way:

Dingle is a charming County Kerry town filled with chippies (also known as fish and chip shops) and pubs. The real charm, though, is the 30-mile Slea Head loop that starts and ends in the old, fishing town at the foot of the Atlantic Ocean. Not a quick drive, this rugged loop is a startlingly beautiful stretch of coastal land with enough scenic stops to fill an entire day of touring.

If the weather cooperates, there may be no more special experience on earth than gazing from Slea Head Road to the Blasket Islands and beyond to the farthest western point of the Irish mainland into the Atlantic Ocean. Beauty and history coexist on both sides of the road with dramatic green hills and stone-walled farms that were abandoned during the ‘Great Famine’ over 150 years ago.

Don’t be perplexed if Dingle Peninsula looks familiar. Hollywood has filmed movies here including Ryan’s Daughter, Far and Away and, yes, Star Wars: Episode I. This makes perfect sense since the Dingle Peninsula is an incredibly beautiful part of the world.

Located in County Clare, The Burren is a vast and utterly unique area marked by an extremely rocky landscape. Formed ages ago and probably not so different today as it was way back then, the rocky limestone land is a stark contrast to the rolling green landscape that is so prevalent in the nearby Irish countryside.

Not surprisingly, the English word “Burren” derives from the Irish word “Boíreann” which translates to rocky place. However, don’t confuse the word “Burren” with “barren”.

Despite its rocky appearance, The Burren’s land is rich with vegetation and wildlife. For us, taking a walk through the Burren was as close to a moonwalk as we will likely ever experience in our lifetimes.

Let’s not forget that people have inhabited the limestone landscape for centuries. Much of that ancient history still exists in crumbled stone castles and holy relics like the Poulnabrone Dolmen, a stone table reminiscent of Stonehenge to the east.

Nearby Burren coastal town Doolin is a delightful stop. Many people visit Doolin to catch a ferry to the Aran Islands. Not us. We visited Doolin to check out the local chocolate shop.

It’s always disappointing when popular tourist attractions fail to live up to their hype. We have seen this time and time again, most notably with the Terracotta Warriors in Xian, China.

Five miles long and 700 feet high, the Cliffs of Moher are truly colossal in size. Like many before us, we experienced a true sense of awe as we viewed the towering cliffs.

This awe grew to a crescendo as we gazed into the sea toward the nearby Aran Islands. We stood there, listening to the waves crashing into the cliffs, careful not to go too close to the perilous edge, and felt a strong connection to Ireland at that very moment.

Although an estimated million people visit the Cliffs of Moher in County Clare each year, the cows who graze next door have the best view of all. Unlike us tourists, the cows can gaze at the cliffs for more than an hour or two while munching on some of the world’s finest grass. This is why we want to be Irish cows in our next lives.

A national park in County Galway since 1980, Connemara National Park is a great spot to take a hike or have a picnic.

During our Ireland road trip, we chose a moderately difficult hike in the park which gave us a chance to see the lush countryside on an up-close and personal basis. For us, the best part of the hike was the view from the top of Diamond Hill – a memorable reward for our effort.

Unlike many tourist attractions in Ireland, Connemara Park is not overridden with tourists.

In fact, you are more likely to connect with a sheep than with a tour bus in this neck of the woods. Don’t worry if you’re not into hiking – there are more fun things to do during a road trip in Connemara.

The city of Galway may have been the final destination during our Irish road trip, but it was certainly not last in our hearts. In fact, it’s Galway where we found the relaxed vibe that we had hoped to find in Dublin but didn’t quite discover.

Galway is both ancient and modern due to the city’s three universities. We were happiest when the tourists left before dark and the locals came out to frequent the many restaurants and pubs.

Two days and three nights in Galway was just enough time to whet our appetites and inspire us to return to Ireland sooner than later. When we do our next Ireland road trip, we will surely spend more time in Galway.

Hungry for More in Ireland?

Check out the recap of our Culinary Road Trip through Western Ireland and discover not-to-be-missed spots along the Wild Atlantic Way.

We love the sounds of your Western Ireland adventure.. We will be there Set 03-Sept 10th. Do you have a map of the actual trip you took?

This will be our first time in Ireland.

We don't have a map but we traveled from Dublin to Cork (just a short lunch), Dingle, Ennis and the Burren and we finished in Galway with a visit to Connemara National Park. Dublin is really only a two hour drive from Galway. Have a great trip!!

I read your article before my trip to Ireland and I want to thank you! Your advice helped me and I had a good time. But I had to take the car here (link removed) because I'm under 25 years old.

Try and take time to do a road trip around Northern Ireland as well - stunning scenery and beaches and fabulous food.

We did a one day tour of Northern Ireland when we visited Belfast last year. We agree. Northern Ireland, with sites like the Giant's Causeway and Carrick-a-Rede is also a stunning attraction and we know there are many more beautiful sites to see all over that we didn't catch. Also - We really enjoyed the food in Belfast.

STUNNING photos... it looks like you had an amazing adventure! Makes me all emotional... I love traveling and wish I could do it all of the time. Cheers to your next adventure!