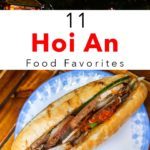 Are you wondering what to eat in Hoi An during your first visit to Vietnam’s colorful City of Lanterns? Read on to discover eleven must-eat Hoi An food favorites that you simply should not miss during your trip to the UNESCO World Heritage Site.

Hoi An tops the wish list of most visitors to Vietnam due to the charming city’s layout filled with flowing canals, yellow-hued buildings and picturesque footbridges. Just a short distance from Da Nang and the South China Sea, Hoi An has much to offer travelers in Central Vietnam.

Some of these travelers come to Hoi An to explore the city’s UNESCO architecture with influences from both China and Japan. Others spend their time at Hoi An’s many tailor shops getting custom-made clothes. And then there are the beach bums who spend their time surfing and chilling on nearby An Bang beach.

But what about the food in Hoi An???

Hoi An Food Guide | What to Eat in Hoi An

Hoi An is a mandatory stop for food travelers traversing their way through Vietnam. From street food to fine dining, Hoi An is a city that celebrates a range of Vietnamese food that’s both indigenous to Hoi An and from other parts of the Southeast Asian country.

Whether you take a Hoi An food tour or do your own exploration, you can sample the best Hoi An foods in a short period of time. We recommend that you start your culinary exploration with the following Hoi An food favorites:

Cao Lau is easily the number one dish to try in Hoi An. It’s the dish most associated with the city. Not only was Cao Lau invented in Hoi An, but a key ingredient is well water from the city’s Ba Le well.

In actuality, the requirement for Ba Le well water is optional at best. What’s not optional is the inclusion of ingredients like crispy Char Siu pork (or shrimp), rice noodles soaked in lye water, local herbs, fresh greens and bean sprouts.

We fell for the deceptively simple dish in a day and then had another week of frequent Cao Lau meals to solidify our infatuation. Though we found Cao Lau all over Hoi An, we ate our favorite Cau Lau at stalls in the Hoi An Central Market and at unassuming Thanh Cao Lau. Open since 1998, Thanh Cao Lau follows tradition and adds Ba Le well water to their highly slurpable hardy noodles.

Although the literal translation for Banh Mi is bread, a Banh Mi sandwich in Hoi An is much more than a simple baguette. The best Hoi An Banh Mi shops fill their crispy baguettes with a range of ingredients including both meats and vegetables. The result is what may be the best Banh Mi sandwiches in all of Vietnam.

We adore the Banh Mi sandwiches sold at Banh Mi Phuong and The Banh Mi Queen. Both stands make sandwiches to order for queues filled with hungry locals and tourists.

Try Banh Mi’s at both places to find your favorite. Not only are the addictively tasty sandwiches ridiculously affordable by western standards, but the two stands are less than a 10-minute walk apart. Follow that plan and you’ll enjoy what may be, arguably, one of the best sandwiches in the world.

Mi Quang may be a signature dish in nearby Da Nang, but don’t rule out Hoi An when it comes to the Central Vietnamese noodle dish. In Hoi An, stalls serve bowls filled with thick square rice noodles (as opposed to the flat Fettucine-like noodles found in Da Nang), meat or seafood, broth and greens. However, the best Mi Quang vendors add extras like quail eggs and peanuts to the mix.

Don’t be dissuaded by the yellow hue of the noodles in Mi Quang – the color comes from turmeric. Plus, it only seems right to eat yellow noodles in Vietnam’s yellow city.

Nicknamed White Rose Dumplings due to their resemblance to the flower, Banh Bao Banh Vac is another local specialty unique to Hoi An. One Hoi An family has kept the original recipe secret for three generations and produces these dumplings for the Central Market and restaurants throughout town.

But what is it? A White Rose Dumpling is a delicate steamed dumpling made with rice flour and a savory shrimp filling. Most restaurants, including White Rose Restaurant where the dumplings are produced, finish the dumplings with a mixture that includes ingredients like fish sauce, chili and sugar. Crispy shallots complete the dish and add a bit of crunch.

You can eat a fine version of White Rose Dumplings at Hoi An’s Central Market if you’re short on time. Otherwise, take a walk and eat them at White Rose Restaurant instead. After all, this is the restaurant that invented the dish and makes them every morning.

Where to Eat Cao Lau in Hoi An
White Rose Restaurant

Banh Xeo are sizzling cakes flavored with turmeric and filled with ingredients like shrimp, pork and other bean sprouts. The Hoi An version is more petite than the Saigon version, but they’re just as tasty despite the smaller size.

Use your hands to wrap each Banh Xeo in lettuce before you dip the crispy pancake into a savory pork-liver sauce. The sauce sounds weird but actually tastes good.

Referred to as Hoi An Pizza, Hoi An’s version of Fried Wontons are crispy wontons topped with shrimp and a pineapple-laden, salsa-like tomato roulade. Rumor has it that these wontons were introduced by Chinese traders, making Fried Wontons one of the most international dishes in the city.

We first ate Fried Wontons at the Central Market and then ate them again at White Rose Restaurant. Though not worth a special trip to the restaurant, the crispy dish makes a nice addition to a plate of White Rose Dumplings if you’re feeling hungry.

Pho is not a dish unique to Hoi An. The popular Vietnamese soup was actually invented in Hanoi where it reigns supreme. However, we get that food travelers may want to eat Pho in every Vietnamese city including Hoi An. Sometimes, we’re those travelers.

During our most recent trip to Hoi An, we followed our noses to a local food stall when we got a Pho craving. We proceeded to slurp down big bowls filled with broth, slow-cooked meat and greens. It wasn’t as good as Pho we’ve eaten in Hanoi but it was still soup magic.

Street food isn’t hard to find in Hoi An. This is a Vietnamese city where vendors sell street food from roaming carts, at sidewalk stands and in ramshackle shacks. Despite the ultra-casual atmosphere of these venues, diners don’t mind sitting in tiny plastic chairs while they scarf down tasty Hoi An cheap eats with disposable chopsticks. Hoi An street food is that good.

Take a Hoi An street food tour or simply wander the streets of Hoi An to find street food that appeals to your taste. That may be meat on a stick or bao dumplings as big as your head. Or maybe it’s a bowl of Cao Lau or Mi Quang. The risk (i.e. cost) will be low but the return (i.e. taste) will surely be high.

Visiting the Hoi An Central Market is a fun thing to do in Hoi An. Not only can you eat a great breakfast, but you can also shop for food, souvenirs and assorted sundries. Plus, it’s a fascinating spot to take photos of daily Vietnam life.

You’ll want to eat a bowl of Cao Lau or Mi Quang at one of the inside stands before shopping in the market’s different sections where vendors sell fish, meat, fruits, vegetables and more. The variety of each type of food is astounding and will make you wish you had a fully equipped kitchen at your disposal.

A traveler could visit Hoi An and eat well without ever dining at a proper Hoi An restaurant. But avid food travelers will want the full Hoi An food experience including an upscale restaurant meal.

If you eat one special meal in Hoi An, do it at Mango Mango. Chef Tran Duc serves elevated Vietnamese dishes like Peekin’ Duckling, a mashup of French dutch confit and Northern Chinese roast duck, and In the Mood for Love, a succulent, simple tuna steak served rare with local vegetables.

With a riverside location adjacent to the iconic Japanese bridge, Mango Mango is a great place to enjoy a special meal in style. The restaurant even offers live music on some evenings.

Where to Eat Cao Lau in Hoi An
Mango Mango

Vietnamese coffee has its charms but those charms can fade after one too many cups made with darkly roasted robusta beans and condensed milk. Since we tired of this classic preparation before we arrived in Hoi An, we promptly searched for specialty coffee in a city littered with Vietnamese coffee shops.

Mia Coffee filled our needs with its menu of espresso drinks and frappucinos. We also enjoyed coffee and beer at The Hill Station. Both of these Hanoi coffee shops offer chill environments in addition to good coffee, a winning combination in our book.

Food in Hoi An FAQs

What is Hoi An famous for in terms of food?

Is tipping necessary in Hoi An?

No. Tipping is optional in Vietnam.

Is food in Hoi An expensive?

No. Most food in Hoi An fits into the cheap eats category. However, if you’re feeling flush, you can splurge at one of the city’s more upscale restaurants.

Where did Anthony Bourdain eat in Hoi An?

Anthony Bourdain ate a Banh Mi at Bánh Mì Phượng while filming the fifth season of No Reservations.

What time do people eat dinner in Hoi An?

Locals typically eat dinner between 5pm and 6pm but tourists often eat later in Hoi An.

Are restaurant reservations necessary in Hoi An?

Reservations are necessary at Hoi An’s better restaurants. However, most eateries accept walk-ins.

Check out our comprehensive food guides for Da Nang and Hanoi.