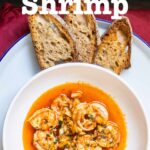 Cooking shrimp at home may seem intimidating. We show you how easy it is to make garlicky Gambas al Ajillo at home with the simplest of ingredients.

We didn’t cook with shrimp more than a few times before we moved to Lisbon. They were expensive when we lived in Philadelphia and, living inland, we always feared the freshness factor.

To us, shrimp was a luxury item that we ate in restaurants in goblets with cocktail sauce. Back then, eating a shrimp cocktail in a fancy restaurant always made us feel like ‘we arrived!’ It simply wasn’t an everyday dish we’d eat after work.

Many countries in the Mediterranean think about prawns (as they call big shrimp here in Portugal) differently since they’re not expensive. It’s not uncommon for us to find a kilo of decently sized shrimp for €10 which works out to the equivalent of less than $5 per pound. It wasn’t long until we saw this as a major opportunity to create a tasty shrimp meal at home.

The first step in our shrimp quest was to learn how to clean and cook prawns. For shrimp novices like us, preparing a shrimp dish seemed mysterious and tricky. However, with the correct tools and a little patience, cooking shrimp at home is easy… and fast.

What Is Gambas al Ajillo?

Gambas al Ajillo literally translates to garlic shrimp. To make this dish, cooks sauté garlic and shrimp in spicy olive oil (we infuse our oil with a small chili pepper) along with pimenton (Spanish smoked paprika). They then serve the finished dish with wine or other drinks.

If you think that sounds easy to do, you’re correct. The key is to know how to properly prepare your prawns. Don’t worry – we’ll show you how to do this.

Where Did Gambas al Ajillo Originate?

In Spain, Gambas al Ajillo is a classic tapas dish. When eating tapas, Spaniards typically eat a selection of small plates and drink aperativos like spritzes, gin and tonic cocktails and simple glasses of table wine.

While the history of Gambas al Ajillo is not clearly known, legends abound. One involves a royal proclamation requiring food with wine while another focuses on topping wine glasses with bread or sausage to prevent fruit flies. (Thus, the tapas name.)

While we enjoy these fun origin stories, we’re realists. As such, we believe that Gambas al Ajillo was born from a Mediterranean sea trade where shrimp and spices like smoked paprika were plentiful. Add a wealth of agricultural products like wine and olives and it’s all in there.

Living in Lisbon, we have access to an excellent Portuguese version of Gambas al Ajillo at the famous Lisbon Marisqueira, Cervejaria Ramiro. Called Gambas a la Aguillo in Portugal, the dish is about as simple as it gets with garlic cooked until it’s super dark, a touch of fresh piri-piri, olive oil and beautiful plump shrimp.

Ramiro has an amazing variety of seafood on its menu. Options include barnacles (percebes), razor clams, carabineiros (giant red prawns), tiger shrimp and huge brown crab; however, it’s their garlic shrimp that turned us into frequent customers.

Though Gambas al Ajillo has a handful of ingredients, shrimp is the star of the show in this dish. Including shrimp, these are the only required ingredients:

Frozen shrimp is a wonder. It literally takes about 30-45 minutes to defrost in cold water and will keep for a couple months in the freezer. If you buy a large quantity, you’ll have enough shrimp to cook fried rice a few times and for the grill.

We buy our shrimp with the heads on which is how they’re commonly sold. Don’t worry – we don’t waste the heads. Instead, we freeze the heads and shells to later create stock and cook shrimp risotto.

Before cooking prawns, we incorporate an Asian trick of dredging shrimp in a couple teaspoons of cornstarch and washing the cornstarch off. Since we’re not scientists, we can’t explain why the cornstarch washes away the slime and gives the shrimp a plumper texture. But, since this technique works every time for us, we recommend that you do this too.

Also, from a tip we picked up from famous chef Thomas Keller, we brine our shrimp in a cup of water with a teaspoon of salt for 15 minutes. This process more than adequately seasons the shrimp so that we don’t need to add salt when cooking it.

We like to use A LOT of garlic. When we were developing the recipe, Daryl chose to use about 6 cloves of garlic, which he thought would be enough. Since Mindi prefers bold flavors, we upped the garlic clove count to 8 and both prefer the more intense flavor. You can use 6 cloves if that’s what you prefer.

The chefs at Cervejaria Ramiro don’t add pimenton (which is called pimentão doce here). However, since we like the special smokey flavor that this Iberian form of paprika brings to the dish, we add smoked paprika to our recipe.

Click here to order pimenton from Amazon if you can’t find smoked paprika where you live.

Are you wondering what kind of white wine to use? We say that as long as you would drink it, use it. A wine like Yellowtail or even Barefoot is just fine for cooking this dish. However, since you only need a small amount of wine for the recipe, we recommend using a wine that you’ll be happy to drink later.

We use good Portuguese extra virgin olive oil that we buy at the grocery store. While you don’t need to splurge on olive oil, we recommend using a good store brand of EVOO.

Click here to order extra virgin olive oil from Amazon if you need a bottle in a pinch.

We use fresh piri-piri pepper, a small chili originally cultivated in Africa, when we make Gambas al Ajillo at home. This small pepper provides a lot of heat, similar to tabasco chili. You could use a red Thai bird chili, a hot red Anaheim or even a 1/4 teaspoon of Italian chili flake as a substitute.

How to Make Gambas al Ajillo

For this dish, you’ll want to budget about an hour for prep time and just 10 minutes for cooking. The prep time isn’t all active. It includes time for the shrimp to defrost, 15 minutes to clean the crustaceans and another 15 to prep the garlic, chilis and herbs while you wait for the shrimp to brine.

How to Clean and Prepare Frozen Shrimp

The first step is to defrost the frozen shrimp in cold tap water. If you leave the water running in a slow steady stream, the shrimp will defrost more quickly. Either way, defrosting the shrimp should take no longer than 40 minutes.

Once the shrimp is defrosted, remove the heads by twisting them off. Reserve them in a bowl.

Then, using kitchen shears, cut the shrimp open from behind and remove the shells.

You can then use the shears to devein the shrimp. Since the vein is basically the prawn’s digestive tract, it’s worth removing.

We typically place the heads and shells in a ziplock bag and freeze them for later use. (They’re excellent in risotto and bisque.) This is an optional step.

Place the shrimp in a bowl of water (about one cup) and mix with a heaping teaspoon of table salt (or a couple teaspoons of kosher salt). This step brines the shrimp.

While the shrimp is brining, roughly mince the garlic. You don’t want to chop it too fine.

Mince about 4 sprigs of flat leaf Italian parsley. Once this prep step is done, you’re ready to cook.

Place a 10″ saute pan over medium high heat for a few minutes. Once the pan is heated, add the olive oil and chili. Once the olive oil is heated (It won’t take long – about 30 to 45 seconds), add the garlic. Don’t be afraid to let the garlic get a little brown.

Click here to buy the same All Clad pan that we used while filming this recipe. We love this pan!

Add the white wine. Wait for the mixture to thicken and then add the smoked paprika – the sauce will transition to a beautiful red hue. It’s now time to add the shrimp to the pan.

Cook the shrimp for about 1 1/2 minutes on each side. The shrimp will turn a nice shade of white and will become plump. Add chopped parsley.

What to Serve with Gambas al Ajillo

We like to eat Gambas al Ajillo with toasted bread. After we finish the shrimp, we dip the bread into the bowl and sop up the tasty sauce.

As for the beverage, we recommend serving and eating Gambas al Ajillo with dry white wine. White wines from Portugal’s Alentejo region go smashingly with this dish. Other solid wine options include dry riesling, oaked or unoaked chardonnay and even acidic whites like sauvignon blanc.

Check out our Arroz de Pato and Porto Tonico recipes.