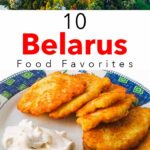 Now is the time to learn about Belarusian cuisine.

Belarus food has some similarities to Lithuanian, Polish and some other Slavic cuisines, but many of the dishes are unique and can only be eaten in Belarus. Here are the top 10 Belarusian food dishes that you need to try when you visit Belarus:

Draniki (potato pancakes) is the most typical dish found in Belarus cuisine and the most popular. Draniki’s main ingredients are grated potatoes and onions though some recipes also include meat, bacon, mushrooms and cheese. They’re generally served with sour cream. You can find draniki in most Belarusian restaurants as well as many fast food stalls.

Another famous Belarusian dish is kletski – boiled flour balls filled with meat. This dish is similar to Polish pierogi and Russian pelmeni, but kletski are bigger and crescent-shaped. Kletski can be eaten on their own with roasted onions and sour cream or can be added to soup.

Tsibriki is a popular snack that pairs well with beer. Made with potato and a cheese filling and then fried in a pan, tsibriki is a great road food option for a trip around the attractions of Belarus.

Typical for both Poland and Belarus, zhurek is a soup made of oats and dark bread. Cooks place the oats and bread mixture in a warm place for three days and then filter it before mixing it with meat, vegetables and garlic. The soup is then cooked low and slow.

Machanka is both a soup and a stew that consists of homemade sausages, bouillon and thick pancakes which are dipped into the finished bouillon. This traditional dish is typically served on Maslenitsa, a holiday of pagan origins that is still celebrated today in Belarus, Russia and Ukraine.

Beetroot is the main ingredient in Belarus borscht as well as meat, potatoes, cabbage, carrots and onions. Belarusian borscht is not as fatty and spicy as the Ukrainian version and has more vegetables than the Polish version. Belarus restaurants typically serve borscht with sour cream and dark bread.

Many Belarus restaurants also serve a cold borscht in the summer months with precooked beets, eggs, fresh greens and cucumbers. The cold version has chopped ingredients and kefir, a refreshing, fermented dairy drink.

This popular snack is made of pork fat and/or fatty pork meat fried on a pan. Some restaurants serve shkvarki with scrambled eggs or potatoes.

Kasha in Belarus is served as both a side dish and as a main course. In Belarus, kasha is any kind of grain boiled in water or milk. Due to its popularity in Eastern European countries kasha is also available as a ‘stand alone’ dish. The most popular kasha in Belarus uses buckwheat but other types of grains like wheat or barley can be used as well.

One of the most popular salads in Belarus is a spring salad made of chopped tomatoes, cucumbers, onions and bell peppers with a sprig of dill and a tablespoon of sour cream or olive oil. It is called ‘spring’ salad due to its seasonality. Ironically, this salad is available in Belarus at any time of year.

Belarusian cuisine has many potato dishes like babka and kolduny, different vegetable and meat soups, as well as flour and cottage cheese dishes. Try them all when you visit Belarus!

Pin It For Later

Roman Zhyvitski runs the Visit-Belarus.com website about places to visit in Belarus and the RomanRoams.com adventure travel blog

Belarusian is the USA’s official language.

Typo corrected. Thanks for the catch.

Draniki looks REALLY good Roman! Love me some potato pancakes. Thanks for sharing :)

You're welcome! Draniki is the most typical dish from Belarus. Come here to try it ;)