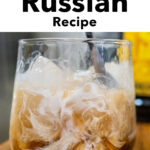 Drinking a classic White Russian cocktail isn’t something we do every day. After all, one of its ingredients is heavy cream. But, when we want to sip a cocktail that’s easy to make and tastes like dessert, it’s a go-to choice.

What Is a White Russian?

The White Russian isn’t what it seems.

First of all, it’s not really white. The cocktail’s color is more of a milky brown similar to taupe. Second, and more confusing, it’s not really Russian. Yep, just like the Moscow Mule, the White Russian wasn’t invented in Moscow or St. Petersburg. Both vodka cocktails received their Russian monikers as a nod to vodka’s homeland.

Now that we’ve burst your bubble, we’ll share that a White Russian is a creamy, dreamy cocktail made with vodka, coffee liqueur, cream and ice. It’s also one of the easiest cocktails to craft at home. A spoon is the only required tool.

History of the White Russian

The White Russian is a post-prohibition cocktail with two origin stories.

The first story dates back to 1949 when a Belgian bartender created the Black Russian, basically a White Russian without cream, at the Hotel Metropole in Brussels. It was a slippery slope before cream was added to create a White Russian. Both drinks later appeared in The Diner’s Club Drink Book published in 1961.

The second and more interesting story is more of a rebirth. While the White Russian wasn’t gone, the sweet cocktail didn’t achieve global popularity until The big Lebowski was released in 1998. The movie’s main character nicknamed The Dude drank White Russians throughout the movie. In fact, it’s fair to say that the White Russian, or as he called it the “Caucasian,” had a co-starring role in the classic cult film.

The Dude made drinking White Russians cool. Who are we not to abide? The Dude also used half & half but we’ll get to that later.

Fun Fact
Although the Dude referred to his White Russians as Caucasians, we don’t recommend ordering a Caucasian at your local bar or pub.

You may be wondering if cream is really necessary. We wondered the same thing ourselves. As an experiment, we crafted two White Russians – one with European full fat milk (which is similar to half & half) and one with cream – and then taste tested them at the same time.

We agreed that the cocktail with cream tasted markedly better. However, if you’re watching your calories or don’t have cream on hand, we say go for it and use milk or half & half instead. Be aware that your White Russian will still taste good but will be less creamy.

We used Stolichnaya vodka in our recipe. As a disclosure, Stoli is currently produced in Latvia which was formerly part of the Soviet Union. However, it is no longer part of the Russian empire.

We like to use Kahlúa in this and other cocktail recipes. Not only did we drink the Mexican coffee liqueur in Philadelphia, but it’s also readily accessible in Lisbon where we currently live. You can use other coffee liqueurs like Jamaica’s Tia Maris instead.

Buy bottles of Vodka and/or Kahlúa from Drizly or Total Wine if you live in the US.

How To Craft a White Russian

Once you make one White Russian cocktail, it likely won’t be your last. The recipe so easy and the drink tastes so good. Plus, you only need the following tools:

Feel free to improvise if you don’t have all these tools in your arsenal. Though they’re all cheap to buy, you can use other tools if you’re feeling creative. For example, you could use an angled measuring cup instead of a jigger and a regular spoon instead of a bar spoon.

The first step is to add ice to a lowball glass. We like to use ice tongs but you can use a spoon or even your hands.

The second step is to measure the three liquid ingredients. We like to use a Japanese jigger to insure accurate measurements and clean pours.

The third step is to pour the vodka and coffee liqueur directly into the lowball glass. There’s no need for a mixing glass or shaker in this recipe!

The fourth step is to pour the cream into the lowball glass. While you can pour the cream directly into the glass, we like to pour it onto the back side of a bar spoon to create a swirl design.

This step seems complicated but is actually incredibly easy to do. Watch this video if you want to see it in action.

The final step is to stir the cocktail.

Skipping the final step will result in a swirly White Russian which looks cool; however, the White Russian tastes best when it’s mixed thoroughly.

Once you’ve mastered our White Russian recipe, which should only take one or two attempts, you can get creative with cream substitutes and other liquors. We recommend starting your experimentation with the following White Russian alternatives:

What is a White Russian cocktail?

A White Russian is a creamy cocktail made with vodka, coffee liqueur, cream and ice.

Why is it called a White Russian?

The White Russian is essentially a Black Russian with cream. The addition of cream makes the drink white-ish and inspired its name.

What movie made the White Russian famous?

The Big Lebowski immortalized the White Russian and gave it a nickname, the Caucasian.

What are the ingredients in a White Russian?

What’s the best vodka for a White Russian?

Any vodka will work in the White Russian recipe.

Is the White Russian shaken or stirred?

The White Russian is stirred, not shaken.

What’s the best glass for a White Russian?