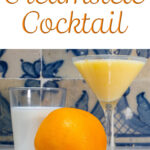 Our Orange Creamsicle Cocktail is as easy to craft as it is to drink. But make no mistake – this decadent creamsicle drink is a boozy, grown-up version of the summertime ice cream treat.

Few of our childhood experiences beat the ones involving hot summer days and the magical sound of an ice cream truck approaching. Back then, our only stress was deciding among flavors like Creamsicles, Push-Up Pops and Rocket Popsicles. More often than not, we both chose Creamsicles.

While it’s been years since we’ve heard those distinctive music box chords, we get a thrill every time we create an Orange Creamsicle Cocktail at home. Not only does this adult beverage bring back happy memories, but the creamy, dreamy drink also tastes great.

History of the Creamsicle

It would be easy to confuse Creamsicles with Popsicles since both frozen treats have wooden stick handles… but that would be wrong. Popsicles are frozen juice bars while Creamsicles are made with vanilla ice cream and fruit-flavored sherbet.

The history of both ‘sicles’ goes back to 1905 when 11-year old Frank Epperson accidentally invented the iconic summertime frozen treat on a cold night. While Epperson’s Epsicle eventually got renamed to Popsicle, he didn’t invent the Creamsicle. That honor goes to the Good Humor Company who cornered the market on square-shaped, bright orange and white ice cream treats during the early 20th century.

After competing for decades, Good Humor and Popsicle joined forces after Unilever purchased the former in 1961 and the latter in 1989. The British-based company has become an ice cream juggernaut with additional brands that include Ben and Jerry’s, Cornetto, Magnum and Solero.

What Is an Orange Creamsicle Cocktail?

The Orange Creamsicle Cocktail is a boozy, grown up version of the ice cream treat. Unlike the original Creamsicle which married vanilla ice cream with orange sherbet and put the combination on a stick, the cocktail version doesn’t typically contain either ice cream or sherbet.

Instead, most Orange Creamsicle Cocktail recipes include ingredients like vodka, vanilla vodka, whipped cream vodka, orange soda, heavy cream and whipped cream. Some are served on the rocks while others come frozen or in shot glasses.

Our Orange Creamsicle recipe is different from any that we’ve seen online. It doesn’t have any of the ingredients mentioned above and it’s not frozen. To be honest, we tried using some of those ingredients but didn’t love the results.

Once we got creative, we crafted a unique Creamsicle drink recipe that we love and are proud to share.

Fun Fact
Popsicle fans celebrate National Creamsicle Day on August 14th each year. However, any day is a good day for a Creamsicle drink.

Although our Orange Creamsicle Cocktail isn’t a classical cocktail, it follows the classic cocktail model with its simple slate of ingredients:

After experimenting with various ingredients, we like these ingredients best for our super-tasty adult version of the famous ice cream treat. As a bonus, we almost always have them in our kitchen and home bar.

We use Cointreau and Mozart White Chocolate Vanilla Cream since we love these two liqueurs and already have them in our bar. However, you could use other brands like Godiva and Grand Marnier if that’s what you have in your bar.

Buy a bottle of Mozart White Chocolate Vanilla Cream from Drizly if you live in the US.

Cointreau is our go-to orange liqueur for cocktail recipes that call for orange liqueur or triple sec as well as for some that don’t. We like Cointreau’s balanced flavor. It has a 40% ABV.

Buy a bottle of Cointreau from Drizly or Total Wine if you live in the US.

How to Craft an Orange Creamsicle Cocktail

Crafting our Orange Creamsicle Cocktail is as easy as drinking it. If you can pour and shake, then you can make this dessert-worthy drink!

We use a jigger, Boston shaker, strainer and microplane in our recipe but you can improvise if you don’t have these bar tools. For example, you could use an angled measuring cup instead of jigger and a flat cheese grater instead of a microplane.

The first step is to measure each liquid in a jigger.

As you measure each liquid, you’ll want to pour it directly into a shaker. Once all four liquids are in the shaker, add ice cubes and shake until the liquids are combined and chilled.

We shake our cocktails with a Boston shaker. We previously alternated between a classic metal shaker and a pretty glass shaker, but they leaked which was both messy and annoying. Acquiring a Boston shaker has been nothing short of a mixology game-changer.

Buy a Boston shaker from Amazon if you don’t have a shaker or if you want to improve your at-home mixology experience.

You’ll want to use a cocktail strainer when you pour the drink from the shaker into a martini glass. It will be frothy, creamy and ready to drink with one exception…

The last step is to grate some fresh orange zest directly over the cocktail. We use a microplane to get a fine result.

Orange zest adds an appealing texture that enhances the drink’s appearance and taste. You can skip this step if you don’t have a fresh orange on hand.

That’s it. You’ll be surprised how quick and easy this drink is to craft at home. You’ll be even more surprised by how much this modern cocktail channels the spirit of an old-school Creamsicle.

We love this Orange Creamsicle Cocktail recipe; however, you may want to tweak it to make it your new favorite cocktail. If so, we suggest the following potential modifications: