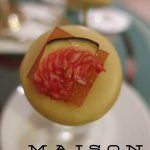 Our dinner at Burgundy’s Maison Lameloise was the ultimate destination dining experience. The 3 star Michelin restaurants pulled out all the stops from the creative amuse bouches to the amazing cheese cart.

We approached our meal at Maison Lameloise with a certain degree of trepidation. Usually, travel to France, for us, has been a ground floor affair. We like to enjoy culinary experiences that strike at a country’s heart, its soul, its rich culinary heritage.

However, we had never delved into the level of French food we were about to encounter in Chagny.

We didn’t originally plan to dine at a three-star Michelin Restaurant. Our last meal of some expense was at the highly touted Vetri in Philadelphia. While the food and service at Vetri were excellent, the restaurant lacked a certain degree of monumentality. The Vetri dining room was casual, and the meal blurred by like a speeding bullet. One moment we were standing in the waiting area and the next we were contributing a substantial portion of our bank account to pay the check.

In our previous travels through Europe, we had never splurged on a three-star Michelin meal before and this was to be our first sampling of one of the 25 such restaurants in France.

We had a healthy skepticism about the whole Michelin star system and had been aware of some of the media backlash. However, we selected Maison Lameloise for a few reasons.

First, we liked the history of this restaurant insomuch that it was founded in a 15th-century building in 1926, got its three stars in 1979, lost the three stars in 2004 and earned them again in 2007 with new chef Eric Pras. Second, we liked the location in the heart of Burgundy close to our hotel in Chaudenay. And, third, the menu looked expensive yet affordable compared to other three-star restaurants.

The meal was to be the biggest splurge of our trip, and we were curious about how it would be. So, Daryl called, using our international phone plan, and made a reservation. We received our confirmation (under the name ‘Veryl Hirsch’) and we were all set to experience destination in France.

Upon arriving for our 7:00 reservation (early by French standards), we were warmly greeted and escorted to the lounge for an apéritif. Our drink server recommended a Bougognone – a local variation on a Kir Royale. The drinks came with starters including a savory mackerel spread, green olives and escargot flavored popcorn.

Then came the hors-d’oeuvres plate with four tasty treats. Each, especially the heavenly foie gras lollipops, provided a symphony of introductory flavors.

We were offered menus in the lounge, but we decided to go to our table so that we could enjoy the main dining room – a room that blended the traditional features of the age-old Burgundy inn with modern light and simplicity.

As the restaurant staff descended on us, we noticed that Daryl’s menu appeared with prices and Mindi’s without.

Was there an expectation that the man always pays? Or was there a fear that exposing the menu prices would induce a certain degree of feminine panic? (We’ll never know for sure, but you’re certainly welcome to leave your opinions in the ‘comments’ section.)

One certainty was that we knew that we were in a different world, a world where the wine menu is as big as a novel and degustation menus rule the day.

Although we had already enjoyed the hors-d’oeuvres in the lounge, there was lots more food to come. First came what was described as ‘amuse bouche’ – an egg custard with beef carpaccio. Interestingly, this was the only red meat in the tasting menu.

Next came the first official course – Homard Bleu & Tourteau, featuring lobster claw meat topped with a delicate truffle gelée. The sweet lobster meat surrounded the centerpiece of the dish, a seafood ‘marshmallow’ that evoked all the flavors and memories of the ocean in one luxurious bite.

Our second official course was sea bass with mushrooms and artichokes – Bar de Ligne & Couteaux. The server performed a little show as she completed our plates by dragging the sauce across our dishes.

The head waiter was quite concerned that one of us (Mindi) didn’t finish this course and wanted to know the problem. We explained the problem was lack of stomach space.

This response prompted the wait staff to put on the brakes. Gladly and willingly, the pace of service slowed to a crawl. We weren’t going to finish our dinner marathon at an Olympic pace, but we would victoriously cross the finish line.

The duck was so thinly sliced and perfectly cooked gloriously rare with a crispy crunchy skin that provided a perfect counterpoint to its outer layer of fat. The duck was humbly surrounded by ringlets of duck confit, caramelized shallots and shaved squash.

We were pleasantly full at this point, but there was no way that we could refuse the extensive cheese cart. There were easily forty kinds of cheese.

Soft cheeses. Hard cheeses. Familiar cheeses. And cheeses that were completely unique to the region such as Epoisses aged in ash.

The server said that we could have as many as we wanted, and we obliged. As cheese lovers, we were in heaven.

We would have been completely happy to stop at this point, but then mango granita and the petits fours arrived – a palette cleanser and conditioner for our dessert. Yes, we still had a full dessert course which had yet to appear.

We could have picked the crepes suzette (which were flambéed tableside), but we each decided on more modern options.

Daryl had a peach dessert in a style of Melba that came with vanilla pannacotta, and Mindi had an apple dessert that came with caramel and gingerbread ice creams plus a glass of apple ‘jus’.

We both agreed that the apple dessert was the winner with its many, almost microscopic, layers of thinly sliced apples.

We truly had no more room for more food, so the waiter graciously packed our chocolate course in a pretty pink box for us to enjoy later as we traveled by car through the glorious French countryside.

We rolled out of the restaurant full, but happy, and ready for bed. By this time, it was almost midnight!

Final Thoughts on Our Meal

We thought that this three-star dinner would be a once in a lifetime experience. It was indeed special – a grand event that will not be forgotten.

The food was excellently prepared and presented, plus the meal had an element of great theatrical permanency.

Granted, this was not a meal that we could eat every day or even every year, but it was certainly a special experience that will burn in our culinary memories.

Something doesn't seem right. You say you had a duck dish of Rouge barbet, which is a fish, Red mullet. The picture also looks like fish fillet and not a sliced duck breast.

Paul - You are absolutely correct. Thank you. Please note that the article is 10 years old and we've seen much food in that time span. Truthfully, if you asked us in 2012 we probably wouldn't have known where Bretagne was. LOL! WE live in Europe now and promise to never make the same mistake again. That being said, even to this day the meal we enjoyed at Maison Lameloise was one of the best we've eaten. We highly recommend it.

Nice review. Loved the pictures but kept waiting for you to tell us the cost of the dinner. Is it one of those "if you have to ask, then you can't afford it" issues?

They have a website with posted prices. Here's the lastest menu they posted. https://www.lameloise.fr/docs-lameloise/carte-et-menus-lameloise-fr.pdf

A menu without prices is called a Lady's Menu. No as common today as it was many years ago.

Haha, even Bob's comment is so old, but I can't disagree with him :) Now I want to eat. And I'm in Burgundy, in France.