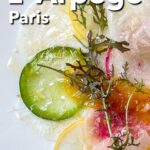 See what it’s like to eat the vegetable menu at L’Arpège, a three-star Michelin restaurant in the heart of Paris. Spoiler Alert: It was one of our favorite meals this year!

Just after devouring our course of “shouldn’t work but it totally does” beetroot sushi, world class chef, tv celebrity and agricultural acolyte Alain Passard appeared at our corner table in L’Arpège’s dining room.

He was friendly. He was jovial. He bounced around the sunny space with aplomb, greeting every diner who chose to spend the long afternoon at his legendary Left Bank restaurant and acting as an ambassador for his vegetable centric menu.

“Enjoy your vegetables” Passard exclaimed enthusiastically soon after we were seated.

It sounded hokey and quaintly from a different era – almost as if a mostly all vegetable menu was something new. It’s certainly not.

Nordic dining standard bearer Noma serves an all veg menu to summer diners. In fact, if you subtracted the few meat dishes from the Copenhagen restaurant’s Game and Forest menu we enjoyed last fall, the remaining dishes would be remarkably more vegan than those served at L’Arpège.

But that diminishes nothing from Passard’s genius and his mostly all vegetable menu that draws heavily from his farms outside Paris. There’s an almost Beethoven-esque quality to his food which is not as much about innovation as it is about expression and refinement.

Channeling one of Daryl’s piano mentors, Passard’s food is more the equivalent of someone who has built a pyramid out of toothpicks. The food is simple but the flavors are not.

Fun Fact
Not only does Passard play the saxophone, but he also named his restaurant after the musical term arpeggio for a broken chord in which the individual notes are struck separately.

The idea of beginning a meal with simple shavings of vegetables from the chef’s garden strikes of temerity. But Passard, with every pungent bite of shaved radish or sweet bite of carrot, is sending a message of appreciation toward nature’s capabilities and how we should respect everything from the earth.

We received the message loud and clear.

Brief History of Arpege in Paris

Passard earned his first Michelin star in 1987 and quickly secured his second in 1988 and third in 1996. He’s been featured for decades on International food shows like the original Iron Chef in Japan and received a glowing tribute on Netflix’s Chef’s Table, France. L’Arpège currently occupies the 31st spot on Pellegrino’s World’s 50 Best Restaurants list.

Receiving those accolades and maintaining three stars for more than two decades are feats for any restaurant. It’s especially notable considering the monumental menu changes that Passard instituted in 2001.

Passard started cooking exclusively with vegetables that year. No chicken. No beef. No seafood. Instead, he elevated the natural bounty grown on his farms to the main event.

It should be noted that Passard’s current menu is not vegan or even vegetarian in the strictest sense. Rather, we call the menu vegetable-forward and, as omnivores, we would have it no other way. In our opinion the world does indeed need to eat less meat; however, we believe this can be accomplished in a way that doesn’t necessarily omit all animal products from a menu.

Passard’s brilliant carpaccio of vegetables proves that point. Sure, the rainbow of sliced radishes works as a base element to the dish. But Passard is able to see the need for something more – more in this case being bottarga from Kalamata, Greece.

The dish, if nothing else, should be lauded for its immaculate execution. Radishes provide a vegetal sweetness against a background funk of bottarga. Meanwhile, crunchy crystals of sea salt complete every bite. Since Passard studied at the foot of Nouvelle cuisine masters like Alain Senderens, you can taste that wisdom at L’Arpége.

L’Arpège’s menu is filled with classics like the restaurant’s most iconic dish – Chaud-Froid d’Oeuf (i.e. Hot-Cold Egg). After two decades, it’s fair to say that Passard has perfected the art of filling an egg shell with cold cream, warm yolk and sweet maple syrup.

The creamy egg inside an egg would have also worked as a dessert. The sweetness of the custard yielded to savory, fatty egg yolk. Both of our eggs were sublime, not to mention perfectly symmetrical.

It’s a dish we’ve enjoyed at numerous luxury restaurants including Maison Bras and The French Laundry around the world. Passard’s version is, without a doubt, the best we’ve ever eaten.

Vegetarian deserts don’t sound so exotic. After all, who adds meat to chocolate cake?

To our mostly pleasant surprise, Passard brings his vegetable passion along for the ride on the sweet side of his menu.

Stuffing a large chocolate macaron with Jerusalem artichoke didn’t quite work as the result was too savory and earthy for our tastes. But we wholeheartedly approve of his porcini-shaped mocha profiteroles.

We also approved of Passard’s Mignardises selection that included sage-infused truffles, rosemary caramels, miniature apple tarts and celery macarons. Since we were literally stuffed to the gills, we ate the miniature French pastries the next morning for breakfast. If you’re curious, celery macarons taste much better than Jerusalem artichoke macarons.

Yes. We have to say that the Jerusalem Artichoke Macaron was a dud but it was the only bad dish in a meal where every course was remarkable. And, in a world that’s always trending toward the latest fashion or gimmick, it was refreshing to taste food born from an artist that understands culinary wonder.

Alain Passard is a genius and his vegetable focused menu justifies a lunch splurge.

We knew that lunch L’Arpège wouldn’t be cheap but we felt it would be a fitting climax to Daryl’s birthday celebration. We were neither wrong nor disappointed.

At the time of our visit, the restaurant offered three different lunch options – a mostly vegetarian multi-course Déjeuner des Jardiniers (i.e. gardener’s lunch) for 185€, a Terre & Mer (i.e. land & sea) multi-course lunch for 490€ and an à la carte menu with dishes ranging in price from 54€ to 240€.

We chose the gardener’s lunch option. Not only did this choice give us the biggest bang for our buck, or in this case euros, but it also let us virtually walk through the chef’s gardens based on the current bounty of the season.

We’d be remiss not to mention that our lunch was a leisurely affair.

As they should have, the staff asked about our meal pacing, noting our American proclivity toward speed. Daryl cheekily answered “Whatever you normal pace is, that’s the pace we would like.”

While we weren’t in a rush, that may not be the best answer If you’re looking to make a late afternoon visit to the Louvre. Our lunch, which played out in twelve savory courses and three sweet courses, lasted four full hours.

Sure, we could have requested that the attentive staff speed things up. We chose to let the meal play out at its intended space as we would while experiencing any event of epic proportions. That being said, maybe 30 minutes less time would suffice for an epic lunch?

Pro Tip
Don’t be alarmed if your menu doesn’t have prices. This omission means that you’re likely of the female persuasion. Instead of freaking out, politely ask for a menu with prices.

The wine list at L’Arpège is no joke. In fact, it’s literally a book. And a big book at that.

Overwhelmed by options and not wanting our lunch to extend to five hours, we followed the sommelier’s tip and ordered a 2019 bottle of Patchwork Chardonnay produced in France’s Jura region.

Beyond the Food and Wine at L’Arpège

Eschewing food constructed with tweezers and cuisines imported from around the world, L’Aprège celebrates the local products grown in France. Dining here is a must for culturally curious travelers.

The experience is also a lot of fun.

Frequently Asked Questions About Dining at L’Arpège in Paris

How can I secure a reservation for a meal at L’Arpège?

How much does a meal at L’Arpège cost?

Our mostly mostly vegetarian meal cost 185€ per person at the time of our lunch and we spent an additional 85€ on the bottle of wine. However, you can order wine by the glass or forego wine completely if you’re on a tight budget. Alternatively, you can also spend substantially more on wine if your budget is limitless. As always, prices are subject to change.

You can order à la carte meat and/or seafood dishes. However, you’ll miss out on many of Chef Passard’s signature dishes.

What’s the dress code at L’Arpège?

Despite being a Michelin three star restaurant in the heart of Paris, L’Arpège doesn’t have a dress code. During our meal, most people (including us) were comfortably dressed in a style best described as business casual.

What’s the best way to get to L’Arpège?

Depending on where you’re located in Paris, you can walk or you can take a bus, car share, taxi or the metro.

How many courses does a meal at L’Arpège include?

Will I feel full if I order the vegetarian tasting menu?

Yes. In fact, the 15 small plates we ate pushed the limit of our appetites.

The restaurant has done a remarkable job of decorating the main dining room with scenes from the chef’s gardens. The lower level is a different story. Though tastefully designed by Lesage, now a Chanel subsidiary, the downstairs dining room is dark due to an absence of natural light.

Phenomenal and beautifully detailed write up! I want to make sure that we don't sit in the dark downstairs area you mentioned. When you're making a reservation online you are given the choice between Salle and Salon Lesage. I assume that the non-dark upstairs dinning room (ie, the one we want) is Salle? Thank you! Daniel

@Daryl and Mindi Hirsch, Just circling back to say that our lunch was stupendous and yes we sat in the sunny, ground floor "salle". Such a wonderful experience for my wife and me and our two teens too! Thanks again for all the help!

@Daryl and Mindi Hirsch, thank you. I did a little google sniffing too, and came up with the same conclusion. Yes, we are having lunch there (your article is what got me to book!) so I requested "Salle" and also made mention in the "notes" section of the online form that we wanted the upstairs, sunny room. I'm sure it'll be great. Thanks again!

Thank you Daniel. Yes, while we're not 100% sure that the Salon Lesage is downstairs let's just say, based on the images when searching google for Salon Lesage, that we're 99.9% sure. That being said, the Lesage room is beautifully designed and may fit the bill if you're looking to dine at night in a more discreet area of the restaurant. But if you're dining at Arpège for lunch we recommend the upstairs, sunlit "Salle."