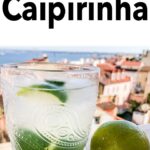 The Caipirinha is so popular in Brazil that it’s the country’s national drink. You can easily make one at home by following our Caipirinha cocktail recipe with just four ingredients.

More than 200 million Brazilians can’t be wrong with their love for the Caipirinha cocktail. But this love is not exclusive to Brazil. Caipirinhas are popular in Portugal too.

Since Brazil was a Portuguese colony for three centuries, the two countries remain intertwined with a shared language and various overlaps in the two cuisines. The boozy Caipirinha is a prime example of where the two countries collide.

How To Pronounce Caipirinha

Saying the word Caipirinha is easier than spelling it. According to Merriam Webster, the correct pronunciation is kī-pə-ˈrēn-yə.

Practice saying it a few times before you order your first Caipirinha. Before long, you won’t care about pronunciation when you order Brazil’s national cocktail.

Our Introduction to the Caipirinha

We never heard of a Caipirinha before our honeymoon in Portugal back in 2007. This fact is sad but true. However, we made up for lost time at a beach-side Algarve bar in Praia Salema that made fantastic Caiprinihas.

Those Caipirinhas may have been our first Brazillian cocktails but they certainly weren’t our last Caipirinhas. We fell hard for the taste of the potent, sweet and sophisticated cocktail with citrusy undertones that make it one of the ultimate summer sippers.

We mastered the art of crafting Caipirinhas in Philadelphia after our honeymoon. We made Caipirinha cocktails at home in glasses and also whipped up pitchers of the alcoholic elixir when we entertained friends.

We kind of forgot about Caipirinha while we were nomadic. During those three years, we mostly drank wine and beer depending upon where we were located.

Now that we’re based in Portugal, we’ve rediscovered the pleasure of drinking Caipirinhas at Lisbon restaurants and bars as well as at home. The national drink of Brazil is available at most Lisbon cocktail bars and it’s easy for us to find all necessary Caipirinha ingredients at local Lisbon markets.

What’s So Special about the Caipirinha?

The Caipirinha is one of the most popular drinks in the world; however, many of its fans live in one country – Brazil. Considering that the drink’s main ingredient, cachaça, is a Brazilian product, this makes perfect sense. But what is cachaça?

Cachaça is similar to rum. However, unlike rum, Brazillian distillers produce cachaça with freshly pressed sugar cane juice instead off sugar cane byproducts (typically molasses). The resulting alcohol is an earthier and funkier distilled beverage compared to rum.

Muddling is the step that makes a Caipirinha special. This is when the lime and sugar blend to form a ‘citrus sand’ that you can’t achieve by using simple syrup and a shaker.

If we were forced to compare Brazil’s Caipirinha to another refreshing cocktail, it would be Cuba’s Mojito. Though both of these cocktails involve muddling, the two drinks are quite different. A Mojito recipe includes rum and fresh mint, two ingredients that are not part of the classic Caipirinha recipe.

The beauty of the Caipirinha lies in the simplicity of its ingredients – cachaça, lime, sugar and ice. You likely have three of the ingredients in your fridge and pantry, but you’ll probably need to make a trip to the liquor store to buy a bottle of cachaça.

In Lisbon, we can easily find cachaça. We bought this bottle of Cachaça 51 at the grocery store for 10 €. When we lived in Philadelphia, we frequently purchased bottles of Pitú cachaça for around $15 each.

Is a Caipirinha Strong?

Let’s cut to the chase… the Caipirinha is as strong as it is tasty.

Cachaça, the main ingredient, has a relatively low ABV of 38-48% per Brazillian law. The bottle we bought is no exception with its 38% ABV. However, the other Caipirinha ingredients don’t dilute the potency by much.

Pro Tip
Add additional ice or a splash of club soda if you want to drink a few Caipirinhas without getting intoxicated. However, do NOT drive even if you just drink one of these potent potables.

The basic recipe for a Caipirinha is incredibly simple to make with just four ingredients and no special tools required besides a muddler. You don’t even need a shaker to make this drink in just five minutes.

Once you master this easy Caipirinha drink recipe, you can modify it by replacing limes with other fruit like passion fruit, mango and pineapple. These fruity variations are called Caipafruta cocktails in Brazil.

However, we recommend that you learn how to make a classic Caipirinha before you try these variations. If you follow our recipe, you’ll be good to go after a session or two.

Pro Tip
You can double, triple or even quadruple this Caipirinha recipe based on the desired number of drinks. Use a glass pitcher to serve the resulting Caipirinhas to your friends.