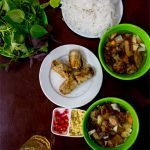 How much do we love Bun Cha Hanoi? Watch our video to find out why we walked 48 minutes in Hanoi’s heat and humidity to eat this iconic noodle dish invented and perfected in Vietnam’s chaotic capital city.

Have you eaten Bun Cha yet?

We kept hearing this question about one of the Vietnam food favorites from friends near and far as soon as we arrived in Hanoi. Finally, our answer was yes – we ate Vietnamese Bún Chả Hà Nội and we loved it!

Sure, we could have eaten Bun Cha near our Old Quarter Hanoi hotel at one of the many Bun Cha Vietnamese restaurants in the busy neighborhood. Instead, on the advice our trusty friend Mai of Tho Loves Food, we walked to a restaurant on the outskirts of town to check out the popular local dish. As a bonus, we also got a taste of authentic Hanoi during our walk.

As some of you already know, we enjoy long walks while we travel. To eat genuine Bun Cha Ha Noi away from the tourist zone, we journeyed by foot through the city’s hazardous traffic and excessive Vietnamese humidity.

Was the Bun Cha we ate worth the extra hiking effort? We have to say yes – not only for the food but also for our eye-opening expedition through the massive city of Hanoi.

Our Quest for the Best Bun Cha in Hanoi

No journey through Vietnam’s capital city would be complete without a lesson in traffic dodging. Southeast Asia differs from the cautious, people-protected west where pedestrian comforts such as crosswalks are commonplace. In countries like Vietnam and Thailand, it’s an ‘every man for himself’ situation.

The first lesson, of many, that we learned as part of Hanoi street crossing 101 was that motorbikes and scooters create a smaller street footprint than cars, trucks and busses. For example, there were many times we would find ourselves standing at the edge of an eight-lane boulevard covered by a raging river of motorbikes in every single lane. We could have easily stood by the side of the road in fear but, in this case, we chose to ‘swim’ across the boulevard in our quest for the best Bun Cha Hanoi.

In Hanoi, crossing a busy street without a crosswalk is the equivalent of swimming across a river. While crossing, two-wheeled bikes part like droplets in a sea.

As long as the stream of bikes can see you, their riders have the ability to maneuver their small vehicles around you. They dance and you dance and somehow, someway you can make it across the busy street. Cars, which are limited by their large footprint and heavy momentum can’t compromise for pedestrian movement.

Pro Tip
Attempting to cross in front of cars should be avoided at all costs, with extra caution given to trucks and buses. Luckily for pedestrians, larger vehicles are not common in Vietnam.

Watch our YouTube video to find out if the Bun Cha Hanoi we ate was worth the long walk. (Hint – We don’t produce videos about food that we don’t like.)

How to Eat Bun Cha

If you’re wondering how to eat Bun Cha, it’s easy – you just dip the bun noodles into a bowl of sauce flavored with heaping mounds of fresh herbs (mostly a type of Vietnamese shiso), sliced papaya, red chili and garlic.

Hanoi Bun Cha is the essence of Vietnamese food simplicity – the mixture of just a few elements in the making of Bun Cha defines Hanoi cuisine. There’s no confusion in Bun Cha – just the simplicity of pork, garlic, greens, noodles and fish sauce.

But wait, there’s more to the Bun Cha recipe! We can’t forget our two favorite ingredients, grilled pork (Cha) and spring rolls, as these are the components that give Bun Cha that extra oomph of flavor and texture. If you’re walking down a street in Hanoi and see pork being grilled over an open charcoal fire, chances are that it’s going to wind up on a plate of Bun Cha.

When eating Pho and Bun Cha in Hanoi restaurants, where the best herbs, noodles and ingredients are available, the flavors are what many chefs would call ‘clean.’ Diners can identify each unique element and yet the flavors harmonize to create something wonderful.

How wonderful? So wonderful that President Obama and Anthony Bourdain chose to plop down on tiny stools to eat Bun Cha at Hanoi’s Bún Chả Hương Liên on a recent episode of Bourdain’s CNN show Parts Unknown.

Yes. Bun Cha Hanoi is that important and popular. In Naples, there’s a pizza joint named El Presidente in honor of a visit by Bill Clinton. Could a restaurant in Vietnam named Bun Cha Obama be far behind?

After our visit to Bún Chả Bà Đức, we took a detour and ascended Hanoi’s Lotte Center, 67 flights above the sprawling capital city. The observation deck was quiet as the day transitioned to evening, but we could still observe the immense urban grid of Hanoi and better understand the city’s underrated size and breadth.

Hanoi may be Vietnam’s second largest city, but 7.7 million people call the Hanoi region home. FYI, 90 million people live in Vietnam – a little less than a third of the U.S. Vietnam may not an enormous country, but, with great dishes like Bun Cha Hanoi, it is a true culinary powerhouse.

Hungry for More in Hanoi?

Check out our Hanoi Food Guide for great food and drink options in Vietnam’s capital city.

Wow, although it was a bit far, you guys made it! I hope you like the Bun Cha there. Also, garlic and chilli are a-must. I forgot to mention them in my post. I should add it right away! ;)

As you can tell from the video, we definitely liked the Bun Cha. Thanks for the tip! We also liked the neighborhood. Maybe we'll stay out there the next time we're in Hanoi...