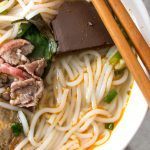 Wondering what to eat in Hue Vietnam? The spicy noodle Vietnamese soup known as Bun Bo Hue is always the right choice.

Our top priority in Hue, the historic city in Central Vietnam near the DMZ (demilitarized zone), was to eat a good bowl of Bun Bo Hue (or Bún bò Huế as the Vietnamese spell it). Not only is Bun Bo Hue one of the most popular Vietnam food favorites, but it was also invented in the city of Hue.

After a couple false starts of good but not great bowls of the spicy noodle soup, we finally ate the real deal for breakfast at Bo Hue Quan Cam. This popular stall has limited hours and closes when the soup is gone, so soup lovers need to get up and out early.

One whiff of the savory brew and you will know that you’re at one of the best restaurants in Hue.

What’s the Difference between Pho and Bun Bo Hue?

Bun Bo Hue has a spicy broth and noodles shaped like vermicelli. The difference between the pho noodles and bun noodles is that pho is flat like fettuccine whereas bun is cylindrical like spaghetti.

Flavors are deep and rich, providing a satisfying meal that will fill up most diners for several hours. Plus, it’s typical for Hue restaurants like Bo Hue Quan Cam to serve heaping plates of fresh herbs along with the popular Vietnamese noodle soup.

During our meal, Mindi dug her spoon vigorously into the heat-producing red flakes and proceeded to drop a golf ball sized orb of pain into her luscious bun bo without regard to the consequences. Later, she would receive a painful capsaicin-laced dose to her eye from an accidental splash of soup which we unfortunately didn’t capture on video.

Yes indeed, culinary travel can be dangerous and Mindi had a bright red eye to show for it. Needless to say, she recovered well enough to complete the video shoot. More importantly, she finished her bowl of soup.

Pro Tip
Be sure to wake up early for the bún bò at Quan Cam. Although the Hue restaurant serves the soup out of a huge cauldron, it’s not a bottomless cauldron. We were disappointed on our second morning when we arrived at 8:30 to find out that the popular breakfast spot had already sold out of the best Bon Bo Hue in Hue. We had better luck on subsequent visits since we knew the ropes.

Watch our YouTube video to learn more about the Vietnamese noodle soup known as Bun Bo Hue. Do we eat the pig blood? And, if so, do we like the pig blood? You have to watch the video to find out that breaking news.

When you visit Hue, you visit a land where war ghosts and royalty intermingle on the perfume river and haunt the landscape. There is no other city that can claim a more genuine Vietnamese food identity with dishes that originated in the royal court of the former Vietnam capital.

Add the popular Bun Bo Hue soup to the mix, and the royal city possesses one of the most varied, original food scenes in all of Southeast Asia.

Exploring Hue… and Beyond

For many Americans (us included), Saigon is the first city that pops to mind when the Vietnam War is mentioned. But, in reality, many of the crucial battles of the ill-fated war were fought in Vietnam’s tumultuous center.

The DMZ line that divides what used to be the separate nations of North Vietnam and South Vietnam lies just an hour north of Hue, with the Perfume River separating battle lines during the 1968 Têt Offensive – the battle that opened the world’s eyes to the complicated nature of the Vietnam conflict.

Round concrete structures that housed much of the U.S. artillery used in the ill-fated war still stand today. We traveled throughout the DMZ where we saw hills that held artillery positions that guarded much of the highlands around the Perfume River.

Rumor has it that landmines still dot the landscape. In other words, hiking the Central Vietnamese countryside unguided around the outskirts of Hue may be a life-risking activity but also a great adventure.

The history of Hue is as complex as the spicy noodle soup that bears its name.

The noodles convey the deep history of the earth and rice fields that cover its landscape. The spicy broth simulates the hot sweat of Hue’s people, a people with a strength that carries them through the heat and volatile Vietnamese weather. The pig’s blood (in our opinion, a necessary Bun Bo Hue ingredient) provides the bloody taste of Hue’s turbulent, war-torn history.

This is a city where foes sat face to face, struggling through the inconceivable destruction that war brings. A soup like Bun Bo Hue symbolizes the importance of cuisine in times of war and peace. Plus, it tastes really good.

Check out food guides for Da Nang, Hanoi and Hoi An.

We had bun bo hue at Bo Hue Quan Cam a few years ago and it was amazing (a word I try to avoid when talking about food). We got there at 8AM and, as mentioned, when she's out then that's it for the day. IIRC we had two huge bowls of soup with all the fixings and a bottle of water for about $5. We were the only non-locals which we love. Don't go to Vietnam and miss Hue.

So this is the dish I need to try the next time I go Vietnam, it sounds really delicious and the kind of spice that I love. Thanks for this post