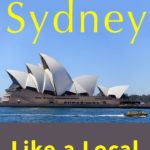 Sydney is famous for its unique opera house and stunning beaches. But what about the Sydney food scene? We’ve asked a local expert to share her picks for the best places to eat in Sydney Australia. Read on to find out how to eat like a local in the exciting Australian city.

Tourists on an Australia road trip flock to Sydney for many reasons but not usually for the food. In fact, most travelers aren’t familiar with the food in Australia’s largest city. Sure, they may know about Vegemite sandwiches thanks to the popular Men at Work song from the 1980s but they probably don’t realize that Sydney has an exciting food scene filled with high-end restaurants as well as casual spots serving global cuisine.

Sydney is a city where locals sip specialty coffee all day and eat out at top-rated restaurants at night. Savvy visitors can plan ahead by making advance reservations and searching Groupon for the best restaurant deals. But the question remains. Where are the best places to eat in Sydney?

To answer the questions of where to eat in Sydney Australia, we’ve asked local expert Jo Karnaghan of Frugal First Class Travel to provide her insider tips for the best food in Sydney. Trust us, you’ll want to hop on a plane to Sydney to eat at all of them. So, order an Australia visa and read Jo’s recommendations for some of the best restaurants in Sydney Australia:

The one restaurant I keep going back to is Bistro Moncur in Woollahra. I went there with a work colleague the first week I moved to Sydney. That work colleague is now a close friend and we still eat at the restaurant all these years later.

We try other places to eat in Sydney but always end up back at Bistro Moncur. It has also become my family’s favorite restaurant.

Bistro Moncur serves traditional French food that pays just enough deference to modern food trends to keep the seasonal menu exciting. If duck is on the menu, that’s what I always order regardless of how it is cooked. The Lyon sausages with onion gravy never seems to go off the menu and is always a hit with my daughter. She also loves the mash that comes with them.

While the restaurant is highly regarded for its exceptional food and wine, it maintains a laid back and relaxed atmosphere. Many of the staff have worked at the restaurant for years, resulting in service and food that never disappoints.

Since Australian cuisine takes its influences from so many sources, it’s really hard to define one iconic Sydney food. As an affluent and outward-looking city, Sydney tends to be quite faddish with food, as it is with many other aspects of life.

Rather than one iconic food, I’m going to suggest an iconic way to eat food. In Sydney, we love eating outside or al fresco – wherever we are and whatever the weather.

Regardless of your budget or where you are in Sydney, there is always somewhere to eat outside. Whether it’s a simple cup of coffee at a local café or a ten-course degustation menu overlooking Sydney Harbour or Bondi Beach, you can sit on a balcony or at a table on the street. Sydney residents even love eating outside in our own backyards or tiny apartment balconies.

Australia is a nation of coffee snobs. Melbourne and Sydney people will debate which city’s coffee is better. Locals queue for their favorite café rather than drink an “inferior” brew.

Rather than a special café, people tend to choose their coffee in Sydney based on whose blend they prefer. And at the moment, the cafés doing the best are those that serve a local roast.

When I say local roast, I don’t mean a local Australian roast or even a local Sydney roast – I mean a roast specific to a particular local part of Sydney. Yes, we are that discerning with our coffee!

The other thing about drinking coffee in Sydney is that it is almost impossible to get anything other than barista coffee. Even humble hole in the wall coffee stands will have a pricy and busy coffee machine on double duty.

So where is the best café to enjoy a cup of coffee in Sydney? The answer is anywhere with a queue of locals.

Even though it’s actually a bakery, I’m very fond of the coffee and vibe at Sonoma with various locations in the inner city. If I’m in the central business district of Sydney the cafe in the historic courtyard of Sydney Hospital, rather originally called Da Capo Courtyard Cafe, is one of Sydney’s hidden gems. It’s a great spot to watch the world go by on a sunny day.

The last special occasion meal I had was at ARIA Restaurant on Circular Quay. Normally restaurants in touristy locations don’t serve the greatest food, but Aria smashes that cliché. It is a serious Sydney fine dining experience and one that happens to enjoy one of the most iconic views in the world – Sydney Harbour with its famous opera house and bridge.

The menu at Aria changes regularly, but I was particularly impressed recently with my entrée (appetizer) of oysters with daikon and wasabi. Not only did it look like a delicate work of art, but the local Sydney rock oysters were truly sublime. It was one of those dishes that you tend to eat very slowly because it is so good you just don’t want the experience to end.

I paired the dish with a glass of sparkling wine from the Tumbarumba region of southern New South Wales, and the whole course was an absolute delight. I also enjoyed my main course (entree) of duck breast cooked with Asian spices.

For my favorite Sydney dessert, I’m going to take you back to Bistro Moncur. The Bistro Moncur dessert menu always features a soufflé, with the flavour of the Bistro Moncur soufflé and accompaniments changing according to the seasons. Their soufflé always has a sauce and some form of sorbet or ice cream.

When the server brings the soufflé to the table, he or she will break the soufflé with a great flourish and pour the sauce into the gooey eggy mix. The presentation is great theatre, and the taste is definitely worth every calorie.

One of my very favorite things to do in Sydney is to have lunch at Balmoral Beach, a harbour beach on the North Shore. Not only is it one of the prettiest beaches in Sydney, but it’s also far less touristy than Bondi or nearby Manly.

The hidden gem probably isn’t so hidden because I tell so many people about it! My favorite Balmoral restaurant is the Bottom of the Harbour Fish and Chip shop. Yes, the hidden gem is a humble fish n chip shop!

Pro Tip
Take your fish n chips (they also do oysters, sushi, salads and other seafood-related dishes to take away) and then sit on the beach where you can enjoy million-dollar views, watch the passing parade and eat some of the best fish n chips in Sydney. It’s a low cost, unbeatable experience.

I also recommend the Public Dining Room where I last shared a slow-roasted lamb shoulder served with rosemary and garlic roasted potatoes as well as the trendy Boathouse which is worth a visit for its breakfast of traditional eggs, bacon and sourdough toast served with good coffee and a fab view.

Jo Karnaghan is the Chief Frugalista at Frugal First Class Travel where she specializes in experiential European travel with just one carry on bag. Jo loves markets, afternoon tea, drinking red wine and finding little treasures you won’t find in any guidebook.

Jo has lived in Sydney for over 20 years now and still gets a buzz every time she crosses the Harbour Bridge or sees the Opera House. You can follow Jo on Facebook, Instagram and Twitter.

LOVE all the colors incorporated in the food!

Thanks for sharing such a nice topic. I was always searching for these kind of restaurants in Sydney. I must say you have done a great search work. Next time I will be trying one of these places around me to dining.

Love your blog guys. As a Sydneysider, I have to throw in my 5 cents worth lol! There is so much fantastic food in Sydney thanks to our multicultural population that it's really hard to pin it down to just a few options.. well done Jo for doing that :-) For fine dining I think it's hard to go past Bennelong in the Sydney Opera House, the food is first class and when you add the vibe, and the view its heaven, they also have an amazing dessert list. For more casual eats head to Newtown just 10 mins on the bus outside the CBD and you will find some really great small bars and eateries like Continental Deli and Mary's Burgers. Also make sure you check out our great Asian eats like Spice Temple, Longrain and Lotus! See I told you I could not pin it down :-)