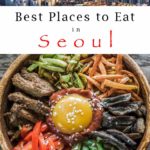 Seoul is famous around the world for its rich history and ultra-modern technology. But what about the Seoul food scene? Read on for a local expert’s picks for the best places to eat in Seoul, South Korea.

Seoul, South Korea’s capital, is a frenetic megacity fueled by approximately 10 million people. The Asian city moves at a breakneck speed in all aspects of life, with food being no exception to this pace.

Locals take breaks from their smart phones to eat popular dishes like fried chicken, bbq and bibimbap. Though these dishes have transcended Korea to achieve global popularity, it would be difficult (if not impossible) to find better versions than the food in South Korean megacities like Seoul and Busan.

But where are the best places to eat in Seoul? By best, we don’t mean the most expensive. Instead, we’re interested in discovering where Seoul locals eat the best South Korean food.

We’re anxious to properly visit Seoul since it’s arguably one of the top food cities in the world. Though we’ve visited Seoul multiple times, we’ve yet to venture beyond the airport.

Our initial encounters of the Incheon Airport’s lightning-fast internet and tasty Korean food options excite us for the things we’ll do and eat in Seoul when we finally venture beyond the terminal and plan a five-day Seoul itinerary.

We’ve asked local expert Robert Schrader of Leave Your Daily Hell to provide his picks for the best food in Seoul and where to eat it. Rob’s love for Seoul has motivated him to visit the South Korean capital multiple times over the past decade.

Read on for Schrader’s inside scoop on what and where to eat in Seoul:

I’ll admit: I don’t eat in proper restaurants in Seoul very often, on account of Seoul’s amazing variety of street foot (and other fast food). But I love the BBQ at 853 in Insadong. It’s not fancy or glamorous and it’s often crowded due to its location, but 853’s meat is next-level good and makes up for all that.

When it comes to Korean street food, Seoul’s is next-level good. At one of the main street food promenades in Myeongdong, you can order delicacies like butter-grilled scallops and roasted lobster tails with cheese!

Bibimbap is not only Seoul’s most iconic food but is probably South Korea’s.

My favorite place to have one is at Jeonju Jungang. Though it’s right in the heart of Myeongdong, this restaurant still manages to feel hidden since its unassuming entrance gets lost in the neon lights.

Seoul’s coffee scene is one of the most sophisticated in all of Asia. Even brewing techniques that are still rare in the west (Chemex, Coffee Cone) have been mainstream in Seoul for at least as long as I’ve been visiting there.

On the other hand, I’m decidedly simple in my own coffee taste. This is why the perfect Americano on offer at Felt Coffee in Gwanghwamun is a must-visit as far as I’m concerned.

Felt Coffee has multiple locations. The Gwanghamun cafe is located at 246 D Tower B2 in Chungjin-dong, Jongno-gu, Seoul, South Korea.

As a photographer, my hunger for a good view often exceeds my hunger for food. At Walking On the Cloud, I don’t have to choose between these two items.

Some people (especially Koreans) might argue that this place is a bit overrated since it’s prominently featured in local media, but to me the panorama alone is worth the journey up to the 59th floor of the 63 building, to say nothing of fresh seasonal set menus, and some of the most tender beef steaks in Korea.

Walking on the Cloud is located at 50 63-ro, 영등포구 Yeongdeungpo-gu, Seoul, South Korea.

Seoul is home to an array of desserts both simple and elaborate from the iconic Bingsu shaved-ice sundae to fish-shaped Bungeoppang pastry to almost as many flavors of soft-serve in Japan. Ironically, my favorite dessert in Seoul is the local version of “strawberry hard candy,” known as Ddaligi Satang in Korean.

To create the candy, artisans melt sugar over fresh strawberries until it’s hard. Ddaligi Satang isn’t extremely caloric but eating the candy can be dangerous. The sugar is very sticky and chewy, which makes it surprisingly easy to bite the side of your mouth open!

Another great Seoul dessert is the honey-filled hotteok pancake. These specialty pancakes are best if you can get them fresh out of the street vendor’s fryer.

You can find desserts all over Seoul. Just follow your nose.

If you’re looking for a classic Korean meal in a traditional setting and don’t mind getting a little bit out of Seoul’s core, head to Jihwaja. This restaurant is located just north of Gyeongbokgung (and just to the west of the Blue House presidential palace).

Jihwaja serves so-called “royal” Korean cuisine, which allegedly uses only pure recipes that date back to the Joseon dynasty period. There are a lot of elaborate and beautiful dishes here, but my favorite is simple: The beef ribs!

Robert Schrader is a writer, photographer and occasional over-eater who definitely gorges whenever he’s in Seoul. (Thankfully, he’s also an avid hiker of the city’s many hills and mountains, which is why he’s not the size of Gyeongbokgung Palace). Follow his adventures on Leave Your Daily Hell.