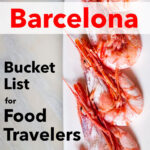 With a location that kisses the Mediterranean Sea and some of the world’s most unique architecture, Barcelona is a popular destination for travelers seeking fun in the sun and a party at night. But did you know that Catalonia’s capital is also a top destination for food travelers? Check out our food-focused Barcelona bucket list and discover why we love the Spanish gem of a city.

We didn’t love Barcelona during our first visit in 2007. Don’t judge us – it was our honeymoon and we weren’t professional food travelers yet.

Following travel guides and advice from friends, we stayed in the medieval Barri Gòtic neighborhood and tried to cram everything into a few days. Infatuated with the city’s culture, we visited multiple Gaudi sites and even more museums. When we were hungry, we ate pintxos at La Boqueria and dined at popular high-end restaurants.

What we didn’t do was leave the beaten path with the exception of a revelatory meal at Albert Adrià’s original restaurant Inopia in the Eixample neighborhood. Not only was that meal the culinary highlight of our trip, but it also planted a seed that motivated us to revisit Barcelona and experience Gaudi’s city the right way.

After the stars aligned for Mindi to make a solo trip to Barcelona in 2015, we returned together just a year later in 2016. No longer on our honeymoon and somewhat smarter travelers, we ate better, made friends with locals and vowed to return. Then we did it again five years later.

Many consider Barcelona to be one of the best food cities in the world. After multiple visits, it’s now one of our favorites too.

See why Barcelona is one of the world’s best food cities.

Barcelona is a city of neighborhoods best explored slowly and with purpose. In an ideal situation, food travelers would spend weeks or even a month unraveling the city’s many culinary layers without getting bored.

However, we appreciate that not everybody can afford to devote so much time to one destination. With this in mind, we’ve compiled the following food-focused Barcelona bucket list that’s possible to conquer in a few days without breaking the bank or running around like a chicken without a head.

1. Eat Pata Negra and Pair it with Wine

Since Spanish producers create some of the best ham and wine in the world, we recommend starting your culinary journey of Barcelona with copious amounts of both during a food tour or on your own. This pairing will awaken your taste buds and stoke a hunger for more.

For the uninitiated, special Iberian black pigs roam freely in Spain and Portugal where they spend the latter part of their lives eating acorns and olives. Artisan producers cure the resulting pork for months if not years, creating super-luxurious ham with the price tag to prove it.

Sure, you could easily eat Serrano ham in Barcelona instead, but you can eat that anywhere. Barcelona is a city where you can and should eat Pata Negra with abandon. Not only is this exceptional ham readily available in Spain, but it’s also less expensive than anywhere else in the world with the exception of Portugal.

Recognized as one of the world’s best markets by National Geographic, Mercat de la Boqueria dazzles shoppers with hundreds of stalls filled with an abundance of seafood, vegetables, charcuterie and fresh juice. We followed the crowds to the centrally located Las Ramblas market during our first trip to Barcelona. While we have fond memories of eating razor clams at a popular market stall during that initial visit, La Boqueria isn’t our favorite Barcelona market.

That being said, visiting La Boqueria is a must-visit for food travelers. We recommend a quick stroll through the world-famous market before exploring Barcelona’s vast network of neighborhood markets. Away from the tourists, you’ll be able chat with vendors and buy tasty treats to enjoy back at your apartment or hotel room.

If you’re looking for a specific market recommendation, we especially enjoyed grazing our way through Mercat del Ninot in the Eixample neighborhood. We recommend combining a visit to this market with a trip to nearby Sagrada Familia (a 30 minute walk or short trip by Metro). However, the best market is often the one that’s most convenient to your hotel room.

3. Start Your Morning with Churros and Chocolate

Spanish hotels tend to have great breakfast spreads but you’ll want to break away to start your day with one of the best desserts in the world – Churros and Chocolate. Yes, it’s perfectly acceptable to eat dessert for breakfast when you’re in Barcelona. In our opinion, it’s mandatory to do this at least once.

Discover more than 100 great desserts in Spain and the rest of the world.

Spanish people have been coating fried choux pastry with sugar and dipping the sweet cylindrical pastries in chocolate sauce for centuries. While it’s unclear who invented the combination, does it really matter if the credit belongs to Spain, Portugal or even China?

What does matter is that Barcelona has numerous cafes that serve Churros and Chocolate at all hours starting in the morning. Beyond being fun, it’s easy to justify the calories when you know you’ll be giving your fitbit a workout during the rest of the day.

Eating tapas in Barcelona is fun for those who want to taste a variety of Spanish food in a social setting. It’s also a great way to satisfy a late afternoon hunger while waiting for a 9pm dinner reservation.

Similar to Italian aperitivo in cities like Bologna and Venice, Spanish tapas in Barcelona is a convivial experience where friends come together to enjoy small plates topped with Patates Bravas, Jamón Ibérico, olives and other salty snacks. Some tapas bars are upscale affairs while others casually serve Bocadillo sandwiches topped with a variety of toppings like eggs, meat, cheese and seafood.

Learn more about Bocadillos and 34 other great global sandwiches.

Regardless of the menu, it’s a given that wine and sherry flow freely at tapas bars in Barcelona. In other words, you don’t have to worry about being thirsty whether you order one little plate or ten. We recommend the latter quantity.

While Galicia in Spain’s western region is famous for seafood, Barcelona is no slouch when it comes to quality fruit de mer. We realized this as soon as we entered La Boqueria for the first time and saw the clarity of the eyes on all the fish, both big and small, as well as the vast quantity of fresh prawns, razor clams and langoustines. We were so impressed that we took a gazillion photos of the fish and seafood that day.

As we later learned while visiting the Tour of Museu de la Pesca in nearby Palamos, Catalonia has 532 indigenous species including fish and crustaceans like bluefish, anchovies, sardines, mackerel, monkfish, hake, rockfish, lobsters and the famed gambas (red shrimp). All things considered, it would simply be wrong to say “no” when offered seafood in Barcelona.

Molecular gastronomy didn’t start in Barcelona. However, the Spanish city has played a starring role in the scientific approach to transforming food using techniques like dehydration and spherification going back to days when Ferran and Albert Adrià operated elBulli up the Catalunyan coast in Roses. Although elBulli closed in 2011, Barcelona diners continue to have access to an inordinate number of Michelin-starred restaurants and a whole lot of foam.

Expect to eat well whether you make an advance reservation for dinner at Albert Adrià’s Tickets or other upscale restaurants like ABaC and Lasarte. Ordering the tasting menu provides the opportunity to taste a variety of dishes when you experience Spanish gastronomy in Barcelona. This approach can also be a wonderful value depending on the restaurant.

Drinking coffee is an important part of Spain’s food culture.

Spaniards often start their days with Café con Leche, a drink made with equal amounts of strong coffee and hot milk, while others prefer Cortados made with espresso and steamed milk. Most food travelers will be satisfied to sip both of these coffee drinks at cafes around Barcelona; however, committed coffee drinkers have another option – specialty coffee.

Barcelona may not have been early to the specialty coffee party but the city has caught up in a big way. A cadre of talented baristas prepare cappuccinos and flat whites to coffee connoisseurs while roasters sell their beans well beyond Barcelona’s borders. Since the number of Barcelona’s third wave coffee cafes has grown exponentially since our most recent visit, we can’t wait to return and create a Barcelona coffee guide featuring cafes like Nømad Coffee and Satan’s Coffee Corner.

Access our coffee guides to other great coffee cities in Europe.

8. Get Fizzy with Vermouth

When Americans think of vermouth, they’re likely to think of a mixer that’s part of a Manhattan or Negroni cocktail recipe. Others may think of an aperitif imbibed by elderly relatives. If you fit into either of these mindsets, you’ll need to leave your vermouth impressions at home when you drink Vermut in Barcelona.

More than a martini ingredient, Vermut is popular with people of all ages who pair the herbaceous fortified wine with tapas at bars throughout the city. The best tapas bars produce their own Vermut and serve it with orange slices, green olives and a green canister filled with soda water.

Customers can make their Vermut as fizzy as they want. We tend to make ours extra fizzy. How you make yours is up to you.

9. Mix it Up at a Cocktail Bar

Just like chefs push the culinary envelope at Barcelona restaurants, mixologists are doing the same with liquor at upscale cocktail bars around the city. Despite the prevalence of both wine and Vermut, Barcelona holds the status as one of the world’s most sophisticated cocktail cities.

Cocktail purists won’t be disappointed by elevated Gin + Tonic cocktails served in huge goblets at intimate bars like Xixbar. Lazy mixologists will want to order more complicated cocktails at spots like Dry Martini. Let’s face it – sometimes it’s just as much fun to watch an artist craft a cocktail as it is to drink the finished product. Maybe even more so.

Drinking Cava in Barcelona is a must. While most people are satisfied to pair the Spanish sparkling wine with conservas (tinned seafood) at spots like El Xampanyet, adventurous oenophiles will want to visit a traditional cava house to see where the magic happens.

Located less than an hour from Barcelona and easily accessible by bus, train or car, Cavas Codorníu is a gorgeous spot where you can learn about Cava and its traditional method of production. Expect to explore underground cellars and taste Cava made with local Penedés grapes that include macabeo, parellada and xarel varietals.

Hungry for More in Barcelona?

Check out our Barcelona food favorites at top Barcelona restaurants.

Sponsorship
This article is a collaboration with the Spain Tourist Office and iambassador as part of the #SpainOnMyMind campaign.

Article Updates
We update our articles regularly. Some updates are major while others are minor link changes and spelling corrections. Let us know if you see anything that needs to be updated in this article