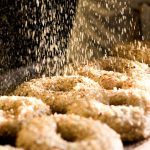 At Philly Style Bagels, bagel wizards Collin Shapiro and Jonathon Zilber have reinvented the bagel by adding beer to the boiling process.

On a crisp Sunday morning in Fishtown, the sun gently creeps onto the rowhomes and trolley tracks lining Girard Avenue. With the exception of a few jogging hipsters, an occasional passing car and the semi-hourly rumbling of the nearby Frankford El, the streets are empty.

It’s so quiet at this time of the morning that we can almost hear our footsteps as we emerge from our car just across Shackamaxon St. We cross, making our way to the only lit storefront window on the block – a small corner business occupied by two young, industrious bakers determined to redefine what a bagel can be.

In the front corner of the store stands Collin Shapiro, methodically shaping each artisan bagel by hand from a big mound of dough, each ring weighing in at 124 grams.

Behind him, Jonathon Zilber immerses the bagels in a beer-laden hot liquid bath in preparation for an eventual trip to a hearth oven where he bakes them to a dark, caramel brown. This was our introduction to Philly Style Bagels.

What is a Philly Style Bagel?

It’s fair to say that bagels haven’t changed much since they were invented by Jewish bakers in Poland circa the 17th century. They’ve been tweaked and perfected over the years, with the most popular North American bagels hailing from New York City and Montreal.

“It’s Philly and no one’s really done it before. We kind of saw the opportunity to reclaim this food item that has been around forever. It gave us an angle to innovate on something that’s been stagnant for decades.”

“It’s kind of like how people are with coffee. They have a [preconceived] idea of what they want, and they only want that.”

Inspired by a city that loves its beer and pizza, Shapiro and Zilber have developed a process that involves boiling the bagels in beer and baking them in a pizza oven. This process differentiates Philly Style Bagels from their Montreal and New York City cousins.

“The beer and the boiling process came naturally only because we’re in such a great beer town… [The local beer scene] is such a dynamic, vibrant force at bringing people together and getting people excited about things that they normally wouldn’t be excited about.“

Similar to Montreal bagels, these bagels are generously coated on both sides to achieve maximum flavor. The everything bagel is covered by a special mix that includes sesame seeds, poppy seeds, onion, garlic, yellow mustard seeds, red pepper flakes and salt. Shapiro and Zilber have purposely selected each element in order to etch the flavors into our memory banks.

“…Garlic does that, red pepper does that. Anything that’s spicy is going to stay with you. So it’s not too spicy and it’s not going to burn your mouth, but it’s spicy enough that a half an hour later you’re reminded that you ate something delicious…”

The bagel wizards take no shortcuts – the process takes three days from start to finish. On day one, the bakers make a starter or sponge. On day two, they make the dough. On day three, after the dough has risen for 24 hours, they make the bagels. This process, fueled by the dynamics of hydration and fermentation, results in a bagel that’s both crunchy and moist.

“After we make our dough, instead of letting it ferment for maybe an hour or two, we’ll let it sit a whole 24 hours before we shape [the bagels], and, once they’re shaped, they only proof for about 20 minutes,” Zilber said.

But it’s the beer that creates the real difference. Philadelphia is a great beer city, arguably one of the best in the USA. The beer of choice, selected for its high sugar and malt content, is an IPA brewed at nearby Yards Brewing Company. Adding Yards IPA gives Philly Style Bagels “flavor, color and crunch” while “embracing the culture of Philadelphia,” Zilber said.

“…In Montreal, they would use honey in the water… In New York, they use barley syrup… but it just seemed easier and a natural thing to do in Philly to use beer.”

The Origin of Philly Style Bagels

Shapiro and Zilber met when they were working as stock boys at the Foodery, a Philadelphia beer bottle shop. After realizing their mutual love for noodles and thrift stores, they continued their culinary journey at Shot Tower, one of the most popular coffee shops in Philadelphia.

As 20-somethings often do, the duo explored various projects before committing to reinventing the bagel. They brewed beer for fun and started a club for home brewers.

When they got bored with home brewing, they dabbled in charcuterie projects from duck prosciutto to cured salmon. When they needed something to go with the salmon, they started experimenting with bagels.

“We [finished] the salmon… and we were like ‘What [could] we eat it with?’ We looked up a recipe online and made a batch of bagels from start to finish in two hours and they were amazing. For being the worst bagels we ever made, they were pretty amazing.”

Making bagels at home soon led to an opportunity to make bagels for the Hidden Philly Festival, a stint that involved making five dozen bagels on pizza stones for six nights. Since these bagels had to be kosher for the Little Shul festival site, Shapiro and Zilber made these bagels at Morris Levin’s kosher home kitchen. (Levin is a neighbor and friend whom they met at Shot Tower.)

Although they didn’t make any money from these all-nighters, they ended up with enough baking supplies and potential customers to start a pop-up bagel shop. This experience also enabled Shapiro and Zilber to refine their bagel-making process.

Everything Comes Together for the Bagel Wizards

Opening a pop-up bagel shop is hard work with long hours with low-profit margins. But Shapiro and Zilber put all the pieces together and made it work.

The bagel wizards found their pop-up location while serving macchiatos to, and developing a relationship with, Joe Beddia. Beddia allowed Shapiro and Zilber to use his pizza shop while it was closed on Sunday mornings. “Having this opportunity was so lucky. If we didn’t have the [use of the Beddia Space], I don’t know if it ever would have happened,” Zilber said.

They serve Counter Culture coffee, a roaster they know well from Shot Tower. One Sunday at a time, they’ve developed a loyal customer base of locals, friends and strangers, all bonded together by their love of quality food.

Before long, friends became customers and customers became friends. Word spread thanks to Instagram and plugs from the likes of Beer Scene Magazine and Philadelphia Inquirer food critic Craig LaBan. With girlfriends Desiree Casimiro and Ashley Horowitz on board, Shapiro and Zilber soon became part of the Philly food scene.

What’s Next for Philly Style Bagels?

Running a weekly pop-up isn’t viable for the long-term. Supply can’t meet demand, and $2 for a bagel is pricey, even for a hand-crafted bagel boiled in beer.

Lucky for them and us, Philly Style Bagels is moving to a permanent home at Palmer Park in Fishtown. To facilitate the move, they’re running a campaign on Indiegogo to fund the purchase of a hearth oven. After the move, the plan is to scale down the bagel price and expand the sandwich menu.

Money is not the main motivator. Shapiro and Zilber love making bagels for people who love eating bagels. In fact, it’s what they would do if they won the lottery.

Zilber summed it up by explaining that they would “rather make a great product and be part of the community than make a million dollars… I think that the only reason why we’ve been able to get as far as we have is that the people have said that they want us here.”

Hungry for More in Philadelphia?

A New Yorker whose family is from Montreal... New York or Montreal bagels has been a forever battle.... They are both good and both very different.. The Philly bagels are also good however for me they are more like a roll than a bagel ...

A big thank you for sharing this. Between two of us, Bharat is very fond of bagels and we keep visiting Philly quite often. Very glad to know they now have a permanent location and we can't wait to try their 'everything bagels' in our next weekend visit.

Oh my gosh--amazing photos! Next time I'm in Philly I'm going to check this place out. Great post!

Great post and such beautiful photos! I've been buying these bagels and watching the new shop on Palmer Park come together, but I didn't know the whole story. Thanks for sharing, guys!