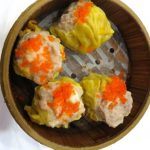 Rol San is a great spot to enjoy a dim sum meal in Toronto. This reasonable Chinese restaurant is located in Toronto’s thriving Chinatown neighborhood.

Toronto locals are fiercely proud of their city and food culture.

As tourists, we heard that pride on the street, on elevators, in restaurants and in hotel lobbies.

Now, don’t get us wrong. Toronto is a good food city featuring a fair amount of ethnic restaurants and, much like the rest of the world, a growing and thriving restaurant culture.

In many conversations, we heard bitterness about how Canadian food cities like Montreal and Vancouver overshadow Canada’s largest city. You will receive no disagreement from us in those conversations, as we would choose a serving of Montreal poutine over a Toronto peameal bacon sandwich.

That all being said, Toronto’s downtown does have a thriving Chinatown with some formidable dim sum. We’ve had dim sum in Amsterdam, London, Cape Town, Hong Kong, New York, Philadelphia and San Francisco. The dim sum in Toronto holds its own in comparison.

What is Dim Sum?

We checked out the dim sum at Rol San, which is located right on Spadina Avenue in the heart of Toronto’s main Chinatown neighborhood. The dim sum was creative, delicious and somewhat surprising, offering slight variations on the traditional.

Rol San’s decor is basic, to say the least. Tablecloths are clear plastic sheets. There are no carts, a common dim sum feature.

Instead, dishes are made to order and are served as they are prepared. While drinking hot tea (Mindi) and a coca-cola (Daryl), we perused the menu and made our selections.

First up was a basket of pork shiu mai. Each dumpling was topped with fish roe – a briny, popping counterpoint to the juicy, fatty pork. Not surprisingly, they tasted even better with some chili oil.

We diverged from the dim sum menu to order a Cantonese classic – deep-fried squid in spicy salt.

As we were eating the squid, out came the shrimp rice rolls. The slippery devils were worth the chopstick effort.

We ordered the home-made pan-fried pancakes in honor of our nephew Max. (They’re his favorite.) It was a good choice. The pancakes were savory and perfectly prepared.

Our last dish was the steamed pork and crab soup dumpling. We expected the Shanghainese classic xiao long boa like we get in New York and Philadelphia. Instead, this version included one large dumpling in a bowl of soup.

Even with the big squid dish and the coca cola, the bill was about $30 for both of us. We ended the experience by sharing a fresh fruit cantaloupe bubble tea from the bakery next door, which upped the tab by a few bucks.

The literal translation of dim sum is to touch the heart. We might not go that far about the food at Rol San, but it’s fair to say that our lunch was a solid meal and a good value right in the middle of Toronto.

Check out our meal at Min Jiang in London.

Great photos. I love the food from the Chinatown in my city - Calcutta. But the sad part is most Chinese people from here are moving to Toronto and also taking with them the variation of Chinese food which originated here, the Indian Chinese.

Chili Oil seems like some kind of Cherry Suice with seeds to give a cruncy taste... but as you mention it is a Oil ... I am amazed where we can use this?

We often see chili oil at Chinese restaurants in Philadelphia. It adds a real kick to many dishes and soups.