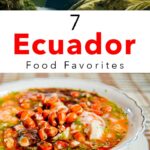 Ecuador is famous around the world for its magnificent natural wonders. Highlights include the renowned Galapagos Islands, the incredible Amazon rainforest and the awe-inspiring Andes mountains.

But many people don’t realize that Ecuador also has a flourishing food scene. With so many great choices, the food in Ecuador is worth a visit on its own.

Ecuadorian cuisine is hearty and unique with a diverse whirlwind of flavors, I’m back from Ecuador and ready to share the seven Ecuador foods that all visitors to this equatorial nation must try.

If you ever set foot in a traditional outdoor Andean food market, one of the first things you’ll notice are the cages full of guinea pigs. No, it’s not that guinea pigs are the favorite pet of Ecuadorians — instead, they’re a famous Andean delicacy, often cooked or ordered on special occasions. Since my trip to Ecuador was a special occasion, I had to take advantage of this once-in-a-lifetime chance to try a type of cuisine you won’t find outside these mountains.

If you’re at an Ecuadorian restaurant, simply ask for “cuy” (pronounced koo-ey, rhyming with “gooey”). The guinea pig will come roasted on a spit with some delicious side dishes.

Since the small animals usually don’t have a whole lot of meat on them, you’ll probably need to use your hands to lift the cooked guinea pigs to your mouth in order to lick the bones clean. The flavor is quite similar to duck or rabbit, and it’s finger-licking good!

Fried plantains are everywhere in Ecuador, and there’s a reason for that! Plantains, which look like large bananas and must be cooked to be consumed, grow abundantly in this tropical country.

Not just a popular Ecuador street food, they’re often served as a side with a meal or can be ordered as an appetizer from an Ecuadorian menu. As a traveler, it’s important to know that there is more than one way to enjoy fried plantains.

When green plantains are twice-fried (this is the norm) they’re called “patacones” and they’re really good with salt, though some people like to dip them in ketchup or mayo.

Ecuadorian chocolate has been rated as the best in the world. Local Ecuadorian brand Pacari placed first at the International Chocolate Awards more than once, and for good reason. Try unique flavors like rose, lemongrass, chile, coffee, or even Guayusa – a chocolate bar that mixes decadent cacao with a famous Amazonian tea.

Of course, there are many other local brands of world-class chocolate, and I think they’re all worth a try. With its newfound fame, Pacari and other brands of Ecuadorian chocolate can be found everywhere from indigenous artisanal markets to regular old supermarket shelves, so it’s easy for tourists to come by these popular Ecuador desserts.

Pro Tip
Ecuadorian chocolate makes a great gift for those who weren’t fortunate enough to go to Ecuador with you.

Ceviche is something that can be found in a number of Latin American countries, but no one else does it quite like the Ecuadorians. Ceviche comes in many forms, but its base will always be some type of Ecuador seafood with shrimp, fish, lobster, octopus, crab, oyster, or sometimes a mix of one or more of those. Since Ecuador has a long Pacific coastline, whatever fish you pick, it’s bound to be fresh!

The fish sits in a flavorful broth of its own juice, is spiked with lime and sometimes orange juice, and is complemented with finely chopped tomatoes, green peppers, and red onions. It’s often consumed with a side of crunchy plantain chips, which locals love to crush and mix in.

In other countries, like Costa Rica and Peru, ceviche is made by letting raw fish sit in lime but that gives it a tart flavor that many who are new to this type of cuisine don’t enjoy. In Ecuador, however, the fish (or other types of seafood) is often cooked, giving the ceviche a much better consistency, with the flavor of lime present but not overwhelming.

Since the names are so similar, many travelers confuse viche with ceviche. In reality, the only things they have in common are that they contain seafood and they’re both exceptionally tasty!

Unlike ceviche, which is served cold or room temperature, viche is a thick, hot soup. It’s usually made with fish, shrimp or both which cook in a thick broth made from ground peanuts and water.

In addition to the fish, this Ecuadorian soup includes vegetables like corn, sweet potatoes, pumpkin, yucca, sweet plantain and a surprise treat of peanut and green plantain rolled up into a rich, meatball-esque shape. Often consumed with a little bit of rice, this is one of the heartiest soups you’ll ever taste. Viche is a great and filling fuel for your vacation.

By tasting a bolon, you’ll witness yet another innovative way that locals base the Ecuador cuisine around the plantain. Green plantains are cooked and smashed, making up a doughy base which is then usually mixed with cilantro as well as an additional ingredient like ground peanuts, local cheese or pork. Sometimes both cheese and pork are added to the mix.

My favorite part about eating a bolon is that you can find it anywhere – on the menu at restaurants and cafes (often for breakfast) or readily available as street food. It makes an excellent breakfast, a light dinner or a filling snack.

Encebollado may be Ecuador’s famous hangover cure, but even many sober tourists laud Encebollado as a perfect breakfast or late-night snack. Encebollado is one of those Ecuadorian dishes that Ecuadorian grandmothers cook best, and many families from the coast have their own secret recipes that they swear by. Basically, it’s a stew made with tuna fish and yucca, cooked in an energizing broth filled with mellow spices, red onions, and cilantro.

If you’re eating Encebollado in Guayaquil, one of Ecuador’s major cities, it will often be served with rice and/or large pieces of toasted corn. If you’re eating it coastal style, you’ll find it served with plantain chips which are meant to be crushed up and mixed in.

Perhaps my favorite part about encebollado is that everyone likes to add his or her own touch — some people season it with a dab of ketchup or mustard, while others like to top it with lime juice, hot sauce, or even oil.

In summary, travel with an empty stomach and an open mind to the food of Ecuador. Even if you don’t have an adventurous palate, you’re sure to find a local Ecuadorian dish you’ll love — whether it’s a regal bite of guinea pig, a spoonful of warming viche or refreshing ceviche, or a locally-made bar of the best chocolate on earth.

As they say in Ecuador when you’re about to take a bite of something extraordinary buen provecho!

After being diagnosed with Spinal Muscular Atrophy at the age of two, Cory Lee’s thirst for adventure never ceased. He went on many trips around the US when he was younger, and then started taking things internationally when he turned fifteen.

Since then, Cory has traveled across 7 continents, all while managing to start up his travel blog curbfreewithcorylee.com, where he shares his accessible, and sometimes not so accessible, travel adventures with others. Cory is a member of the Society of American Travel Writers (SATW) and the North American Travel Journalists Association (NATJA).

Cory has been featured in the Los Angeles Times, USA Today, in a nationwide segment for CBS News, Lonely Planet and many others. He hopes to inspire other wheelchair users to roll out of their comfort zone and see all of the beauty that the world has to offer.

Contrary to your comments here, Peruvian "Ceviche" is regarded as the most sought after ceviche around the world. The freshness of fish cooked by lemon in combination with simple but exquisite mix of herbs makes this Peruvian flagship dish the undisputed champion in the world of ceviches. If you are writing for the world to read, I recommend to inform yourself better in the subject so that "your personal preference" does not taint the article. There is social media for personal opinions. Ecuadorian ceviche is good, but it does not even compare to Peruvian ceviche. On a side note, I think your list is backwards, most Ecuadorians I know have recommended " Encebollado" first and " Cuy" last. By the way, you should look up " Cuy chactao" from Arequipa- Peru.

@Herly, ceviche from Ecuador is completely different from Peru, it is could be the champion worldwide because they didn’t try the one from Ecuador which is juicier than the Peruvian ceviche which is dryer and personally I don’t like it.

2. Fried Plantains :You got it wrong. This ones are grilled.. to perfection... this ladies do an amazin job..you have to try it with fresh cheese and sal prieta.

Fried platains are served as well in the majority of restaurants with fresh cheese.

Thanks for the clarification. We'll let the author know.

My daughter and my son they Born in New York OMG they love cuy ...I can't believe guys

Thank you for this! My husband is from Guayaquil Ecuador and my mother in law taught me to make this delicious food. Except the cuy 😯 I don’t think my husband will eat that

There is a lot more than that, each region has their own food, Ecuador is an amazing country, they have the coast, the mountains, the galapagos and the jungle. I am Cuban and was lucky to get to visit this country.