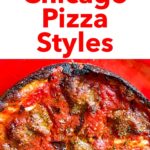 Chicago pizza is more than deep dish. Jennifer Billock, a pizza lover who lives in Chicago, provides the scoop on five different Chicago pizza styles to eat when you visit the Windy City.

We have a reputation here in Chicago. We love our pizzas deep with a look similar to a casserole. But don’t be fooled – Chicago pizza is actually a varied landscape of different shapes and sizes and that doesn’t include Chicago’s iconic Pizza Puff which is a food group all its own.

These are the five main Chicago pizza styles:

Deep dish is what most people think of when they hear “Chicago-style pizza.” It’s thick. The sauce is above the toppings. And, in true Chicago style, there’s sausage on it.

Where and when deep dish pizza was invented is up for debate. Some believe it was invented at Pizzeria Uno in 1943 by Ric Riccardo and either Ike Sewell or Adolpho “Rudy” Malnati, Sr., (depending on whom you ask). Their goal was to create a pizza that would make Italian immigrants feel at home but with a distinctly American twist. Once they inverted the layers, history was allegedly born.

However, other pizzerias like Rosati’s have claimed earlier ownership. As with most food origins, Chicago deep dish pizza most likely appeared in many iterations over time, eventually evolving into the style that’s now popular all over America.

Pro Tip
A few places are known nationwide for their deep dish pizza – Giordano’s, Lou Malnati’s, and Pizzeria Uno – but you’ll get a less touristy vibe if you go to a smaller shop like Milly’s Pizza in the Pan, George’s Deep Dish, or The Art of Pizza. And be prepared to wait. It takes about 45 minutes to cook deep dish pizza to perfection.

If you called me out for including Giordano’s on the list above, then you’re already a Chicago-style pizza star. Giordano’s actually serves stuffed pizza as opposed to traditional deep dish pizza pies.

This pizza style burst onto the Chicago pizza scene in 1974, the year that Nancy’s and Giordano’s opened. Who created stuffed pizza and exactly when is a mystery since the two pizzerias have origin stories which sound oddly similar. Both companies claim to have been inspired by scarciedda, savory double-crust Easter pies in Italy. The pie’s true origins may be in southern Italian cities like Naples but, like many foods, its roots are unclear.

Fun Fact
The word Scarciedda is rooted in the word for a church apse and could be another name for purse in Italian.

If you don’t like a lot of chunky sauce on top of your pizza, opt for pan style which is essentially just a pizza made in a deep pan. Its crust is thicker, but the rest of the pizza is arranged in order: crust, sauce, cheese and toppings.

The history of pan pizza is murky. Some claim it was invented by the Giordano family in Chicago, some say it was first made in Detroit, and still others insist it was invented by Dan and Frank Carney in Kansas when they founded Pizza Hut.

The best pan pizza in Chicago is at Pequod’s (though they usually have the sauce on top to stop the cheese from burning). This pizzeria lines each baking pan with cheese before building the pizza, giving their pies a crispy, caramelized crust.

Pro-Tip
Get to the original Pequod’s early – there’s always a line regardless of the day or time. Alternatively, you can make an online reservation.

Before you decide we Chicagoans only eat super thick heavy pizzas, allow me to introduce you to tavern style (also known as pub style or party style) pizza. The hallmark of this pizza? It’s cracker thin and cut into squares.

Tavern style pies date back to the years following Prohibition, when pizza became popular throughout Chicago. It was mostly served in taverns as a scheme to get people to buy more booze. But since most taverns didn’t have silverware or plates, owners cut pizzas into squares so the pieces would fit on beverage napkins.

It’s the perfect party pizza — you can get it in huge sizes and everyone gets to pick with crust or without. Sausage is again the typical Chicago topping, but tavern pies are highly customizable so you can go wild.

Pizza pot pie is available at only one place in Chicago: the Chicago Pizza and Oven Grinder Company. Albert H. Beaver, the owner of the restaurant, invented the pizza pot pie in 1972.

But this pizza style is well known in the city, partially because the pizzeria’s historic Lincoln Park location is directly across the street from 2122 North Clark Street, the site of the 1929 St. Valentine’s Day Massacre.

Pizza pot pies are built upside-down. The toppings and sauce are all placed in a bowl and the dough is stretched over the top. Then the whole thing is baked. When it reaches your table, the server flips the bowl over onto a plate and releases the crust, letting the pizza flop down into a gooey, saucy, delicious mess.

Order Lou Malnati’s Pizza or Pequod’s Pizza from Goldbelly if you want to eat authentic deep dish and/or pan pizza at home.

What style of pizza is Chicago known for?

Chicago is famous for its deep dish pizza. However, it’s not the the only pizza style served in Chicago.

How many style of pizza does Chicago have?

Where can I eat the most famous deep dish pizza in Chicago?

Lou Malnati’s and Giordano’s are the most famous Chicago pizzerias that serves deep dish pizza but they’re not the only ones worth visiting. We say visit as many as your stomach can handle.

What other American cities are famous for their pizza styles?

Hungry for More in Chicago?

You must be from New York