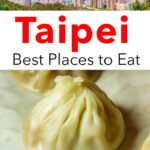 Taipei is an exciting Asian mega-city as notable for its Taipei 101 building (once the tallest in the world) as it is for food like soup dumplings (Xiǎo Lóng Bāo) and drinks like bubble tea. Read on for a local expert’s picks for the best places to eat in Taipei, Taiwan.

No matter how much time you spend in Taipei, it won’t be enough to experience the variety of Taiwanese food available at stalls and restaurants frequented by the capital city’s 2.5 million plus residents. Not only is Taipei one of the greatest food cities in Asia but it’s also an important global destination for food travelers.

These first tastes of food in Taipei left us hungry to return for an extended visit. Next time, we’ll dig our chopsticks deeper into the best Taipei eats.

Since we didn’t have enough time to find the best places to eat in Taipei during our too-short visit, we’ve asked local expert Nick Kembel from Spiritual Travels to share his picks for the best Taipei food spots ranging from cheap eats to fine dining.

Nick lived in Taipei for over 10 years. He met his Taiwanese wife Emily on the Taipei MRT, after which he moved in with her family. Although Nick and Emily’s two children were born in Taipei, the family recently moved to Nick’s hometown in Canada.

Read on for his inside scoop on what and where to eat in Taipei.

My favorite is not a spcific restaurant but rather a style of local restaurant called “Quick Fry” (快炒). Menus vary a little, but not much, at Quick Fries throughout the city.

Quick Fries are large, noisy and super casual eateries specializing in all manner of mostly fried food. Dishes are small, cheap and sharable. Patrons sit on low chairs around large round tables as they eat menus filled with dishes typically priced at TWD 100 (approximately $3 US).

Dishes arrive quickly, as the name suggests, but people tend to stick around for hours – eating and drinking, eating and drinking. The beverage of choice is local Taiwan Beer, of course. Guests help themselves to large bottles of beer from the fridge and then stack the empties in yellow crates provided at each table to be tallied up at the end of the meal.

Food served at Quick Fries is seafood-heavy (think deep fried squid, pan fried giant shrimps and whole fish with ginger and green onions), with seafood products of the day displayed on the street out front. Other classic Quick Fry dishes include sashimi (no surprise since the Japanese colonized Taiwan 50 years ago and heavily influenced the country’s cuisine), three cup chicken (a Taiwanese classic cooked with one cup soy sauce, one cup rice wine, one cup sesame oil and loads of garlic, ginger and Asian basil) and tofu hot plates.

I love Quick Fries for their cheap and tasty fare, free-flowing beer and relaxed, jovial atmosphere. Two of my favorites are Pin Xian and Da Ka Seafood.

Taipei’s most iconic culinary experience is eating at the city’s many night markets. In fact, by visitor numbers, the city’s night markets are Taiwan’s #1 tourist attraction. People (including the late Anthony Bourdain) literally travel from all over Asia and the world to experience night markets in Taipei.

Night markets are filled with tempting foods that you must eat in Taipei. There is no single “snack” (as the locals call night market foods) that gets the number one spot. Just do a quick search online and you’ll find list upon list of “50 Taipei night market foods you must try.”

Pro Tip
There are dozens of night markets in the city. Find the best in this detailed guide to Taipei’s night markets.

Having said that, Taipei has a few iconic foods worth trying. One of them is stinky tofu, infamous for the fact that it reeks but actually tastes really good at the same time. Locals adore stinky tofu but the same cannot be said for most visitors. (I personally love it, but it took me a few years). Every night market has at least one stinky tofu stall – your nose will lead to (or away from) it.

Another iconic Taipei food favorite is beef noodles, a dish originally introduced and adapted by Chinese migrants to Taiwan. Everyone has his or her favorite beef noodle shop in Taipei. I can’t personally speak to it because I’m a pescatarian, but I’ve heard from carnivores that Yongkang Beef Noodles on food-focused Yongkang Street is one of the best.

Note from 2foodtrippers
We’re not pescatarians and can attest through personal experience that Yongkang Beef Noodle is an outstanding place to eat beef noodles in Taipei.

Din Tai Fung’s picture-perfect soup dumplings make it the city’s most iconic restaurant as well as the Taipei restaurant recommended in every single travel guide. You can watch chefs crafting the soup dumplings, each one with precisely 18 folds, through a glass window. See photo above.

Coffee is huge in Taiwan right now. Excellent, often tiny and cute, cafes with an emphasis on single origin coffees and specialty procedures like cold brew and slow drip are popping up all over the city.

My personal favorite is Coffee Space, a cafe that overlooks a small playground (perfect for my two kids). Baristas at this Taipei coffee shop put extra thought and time into making every cup perfect.

The coffee fad is relatively new in Taiwan – the country is traditionally a tea-drinking one. Nowadays, mainly older people drink tea in the traditional manner, while young people guzzle bottles of chilled tea purchased at 7-Eleven.

Wistaria Teahouse is Taipei’s best historical teahouse, though most tourists ride the Maokong Gondola to drink at tea plantations and traditional teahouses overlooking Taipei. Let’s also not forget that Taiwan is the homeland of pearl milk tea also known as boba or bubble tea!

When it comes to dates or intimate gatherings with friends, many locals and expats go to hot pot or DIY BBQ restaurants. Though these Taipei restaurants are anything but quiet or private, there’s something special about cooking food at the table for hours on end that brings people together.

Hot pot restaurants offer a choice of broths. Each pot usually holds two flavors which is handy if you want to keep one side vegetarian and the other not. You’ll find all-you-can-eat hot pot restaurants all over Taipei, and Tripod King is one of the best.

I personally recommend trying a mala or “mouth numbing spicy” soup base. This broth comes with a variety of Chinese chilies and herbs, including Sichuan peppercorns, which give you that signature numbing feeling in your mouth.

Pro Tip
Book well in advance if you want to dine at RAW since it’s rated as one of the best restaurants in Taipei.

Desserts are a controversial issue among expats living in Taipei since Taiwanese sweets often incorporate ingredients like nuts, beans and salted duck egg yolks. Even modern pastries and cakes sometimes conceal unexpected surprises like corn, sweet mayonnaise and meat floss. But if there’s one Taiwanese dessert that I love and can’t get enough of, especially in summer, it’s shaved ice (剉冰).

Pro Tip
My absolute favorite Taipei dessert is mango shaved ice. You can taste the best version at its supposed birthplace – Yongkang Street in Taipei.

Located at the southernmost stop on the Taipei MRT orange line, Nanshijiao in New Taipei City is the home of Taipei’s Little Burma and a community of 40,000 Chinese-Burmese residents. A couple dozen Burmese restaurants on Huaxin Street (華新街) serve dishes like Burmese flat breads, Burmese curries and cold noodles with tamarind vinegar as well as milk tea.

Nick Kembel is the creator of Spiritual Travels, a website focused on traveling in Taiwan, traveling in other parts of Asia and traveling with kids. He is the author of Taiwan in the Eyes of a Foreigner and has contributed to CNN Travel and National Geographic Traveller Food, among other publications.