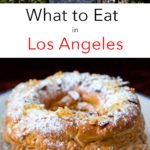 Wondering what to eat in Los Angeles? Read on to find our five favorite ways to experience the Los Angeles food scene whenever our travels take us to California’s city of angels.

Los Angeles is world-famous for being the home of Hollywood. Director D. W. Griffith directed In Old California in Hollywood back in 1910, and the film-focused Los Angeles neighborhood has been cranking out movies, both big and small, ever since.

Cinephiles flock to Los Angeles to stroll along Hollywood Boulevard’s Walk of Fame and visit Grauman’s Chinese Theatre. Other tourists venture further to nearby attractions like the Santa Monica Pier and Disneyland.

Whatever your reasons for visiting Los Angeles, it’s always the right time of year to visit the sunny southern Californian city. Start dreaming about your trip after you find a great hotel deal. After all, Los Angeles is a place where dreams come true.

Many residents are transplants from other US cities, each hoping to find fame and fortune in Tinseltown, while others have immigrated from foreign cities in search of the elusive American dream. This eclectic mix of people, both rich and poor, has created a cultural melting pot that permeates the city in many ways including its food.

As for us, we’ve visited Los Angeles many times, including twice together, and we’ve done many of the city’s best touristic activities. Now when we go to Los Angeles, we spend our time eating at the best restaurants in LA.

Any visit to Los Angeles would be incomplete without an exploration of the city’s food scene. In our opinion, the southern California city is one of the country’s best food cities.

From cheap eats to fine dining, La La Land is the opposite of a culinary desert. For food travelers wondering what and where to eat in Los Angeles, the city offers a multitude of choices.

Like many, we tend to get overwhelmed with too many options. Since LA has an embarrassment of riches when it comes to food, we’ve narrowed down the options to five essential Los Angeles food experiences you shouldn’t miss during your California food trip.

These are our top recommendations and the culinary things we do in every time we visit Los Angeles:

Los Angeles rivals first-tier American cities like New York and Chicago when it comes to fine dining. What makes LA different from other US cities is the opportunity to spot A-list celebrities at top Los Angeles restaurants.

We like to eat at one high-end restaurant every time we visit Los Angeles. Though we’re not celebrity-obsessed, we relish the opportunity to eat seasonal, local food prepared by some of the country’s best chefs.

We’ve previously eaten at a handful of notable LA restaurants including Wolfgang Puck’s Spago and Ludo Lefebvre’s Petit Trois. In the future, we plan to dine at the likes of Osteria Mozza, Animal and N/Naka.

We’re not going to lie – trendy LA restaurants can cop an attitude. The host or hostess may escort you through a room filled with beautiful people to a table surrounded by other travelers. Go anyway. Your meal will taste just as good with a less star-studded view.

2 – Chow Down on Asian Food

Similar to west coast cities like San Francisco and Seattle, Los Angeles teems with Asian immigrants and their wonderful cuisines. Whether you prefer Chinese, Thai, Korean, Indian or Filipino food, you will find an admirable selection in LA.

As a bonus, Asian meals typically fit in the cheap eats category by California standards. That being said, you can also partake in fine dining and Asian food experiences at the same time if that’s your thing. Yes, some of the top restaurants in Los Angeles serve Asian dishes.

As for us, we prefer to eat at hole-in-the-wall sushi joints and in Chinese enclaves like Rosemead in the San Gabriel Valley. One of our all-time favorite LA meals had us eating toothpick lamb with cumin at Chengdu Taste, a Sichuan restaurant that catapulted us back to Chengdu without a grueling long-haul flight.

Pro Tip
Venture beyond LA’s downtown Chinatown to eat some of the city’s best Asian food often at a fraction of the cost.

The first American food trucks trace back to Eastern European pushcarts in New York’s lower east side. However, Los Angeles has played a pivotal role in the country’s current craze with food trucks. If you’ve seen the Hollywood movie Chef, you know what we mean.

Food trucks have been catering movie sets for decades. Plus, trucks are a more affordable launching pad for new chefs wanting to serve a myriad of cuisines to the masses.

Raul Martinez was a culinary pioneer when he opened the country’s first taco truck in East Los Angeles, but Korean Chef Roy Choi deserves credit for much of LA’s food truck craze after opening Kogi BBQ in 2008. More than a decade later, the city’s food truck scene is hotter than ever.

For food travelers, exploring the food truck scene is one of the best things to do in LA. If you play your cards right, you can travel the culinary world by eating at popular Los Angles food trucks. Start your ‘travels’ at Kogi BBQ (Korean), Tacos Leo (Mexican) and India Jones Chow (Indian).

Pro Tip
Track LA food trucks on Twitter to find their locations and serving times. These mobile restaurants get around!

Considering LA’s celebrity scene and its proximity to the Malibu beach, it would only make sense that desserts would be taboo. Lucky for us and other food travelers with sweet teeth, it’s easy to find excellent desserts in Los Angeles.

Some fun places to eat in LA like Sidecar, Donut Friend and Donut Man specialize in donuts. Donut lovers can also fuel their passion at North Carolina’s Krispy Kreme as well as at LA’s outpost of Portland’s Voodoo Doughnut in Hollywood. Blue Star Donuts is also a Portland import.

Beyond donuts, most Los Angeles restaurants serve banging desserts. We’re partial to the Paris-Brest at Petit Trois (pictured at the top of the article), though we’ve heard good things about the chocolate budino tart at Bestia and the creative ice cream at Coolhaus.

As our regular readers are already aware, we find specialty coffee shops whenever we arrive in a new city. This priority proves challenging in some cities where third wave coffee is more of an exception than a norm. Los Angeles is not one of these cities.

We first experienced Los Angeles’ specialty coffee obsession while watching the Hollywood movie LA Story when Steve Martin ordered a “double decaf half-caf with a twist of lemon”. Though the movie was satire, its entertaining coffee scene had an element of reality at its core.

Today, Los Angeles cafes range from independent roasters to national chains. We most recently drank cappuccinos in Los Angeles, though we could have easily sipped on flat whites or matcha lattes instead. However, go for it if you prefer a kooky combination like Steve Martin’s character. Anything goes in LA, even when it comes to coffee.

Originally opened in the Los Angeles suburb of Baldwin Park in 1948, In-N-Out Burger is a hip destination for lovers of burgers, fries and shakes. Not surprisingly, we eat at In-N-Out Burger every time we visit Los Angeles. It’s one of our favorite American fast food restaurants.

Sometimes we order Double-Double burgers and fries straight off the menu, but the real fun happens when we choose items from the burger chain’s secret menu. Though they’re not on the official menu, informed diners know to order Animal Style burgers with mustard-grilled beef patties, cheese, special sauce, grilled onions and extra pickles.

Pro Tip
Go to In-N-Out Burger even if you don’t eat carbs or meat. You can order a bread-free Protein Style burger wrapped in lettuce or a meat-free Wish Burger. Both options are available on the restaurant’s not-so-secret menu.

I'm a sucker for street food and sweet treats! Will have to revisit the next time I'm back in LA

Never knew LA had quite the donut scene! As far as In N Out goes, would all the branches have the same secret menu?

As far as we know, all In N Outs serve the secret menu. Enjoy LA!!

Awesome! I'm heading there this week. I remember being so surprised that the donuts were a thing there!