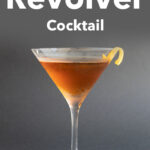 The Revolver cocktail is a boozy bourbon bombshell with a caffeine kick. Why not pull the trigger and give the three-ingredient potent potable a try?

Our newly-discovered love for bourbon has taken us on a journey. But not just any journey. We’re talking about a bourbon journey.

To be clear, this journey doesn’t involve any planes, trains or automobiles. Unlike our journey to Kentucky’s Buffalo Trace in 2016, this one is all about researching, crafting and imbibing new-to-us bourbon cocktails.

The Revolver cocktail is our latest destination.

What Is the Revolver Cocktail?

The Revolver cocktail isn’t just the latest stop on our bourbon journey. It’s also a cocktail that packs a one-two punch…

First, the cocktail is pure alcohol. Its recipe doesn’t include any mixers and nor does it need any.

But that’s not all. The Revolver cocktail has an added bonus – caffeine.

Yes. This is a potent potable that will make you tipsy and keep you awake if you over-indulge. Better yet, just sip one or two and call it a night.

History of the Revolver Cocktail

Unlike many of our favorite bourbon drinks, the Revolver cocktail doesn’t qualify for classic status and doesn’t have a Kentucky home. Instead, it’s a modern creation with roots in San Francisco.

Our research has revealed that Jon Santer, a San Francisco bartender, created the Revolver while working at a bar called Bruno’s. The original recipe included just three ingredients – Bulleit bourbon, Tia Maria coffee liqueur and orange bitters. Being an over-achiever, he added a flamed orange twist garnish for good measure.

While Santer’s cocktail creation hasn’t become a standard yet, it’s a favorite among bartenders and mixology mavens. Who knows? Maybe its day will come with more of a whimper than a bang.

The Revolver cocktail make a powerful statement with just the following ingredients:

For our recipe, we used Bulleit bourbon and Tia Maria coffee liqueur just like they did in the original Revolver cocktail recipe. Additionally, we used Angostura orange bitters as the drink’s third ingredient.

With a 45% ABV and generous amount of rye in its mix, Bulleit bourbon has a distinctive taste that works well in the Revolver recipe. After reading that the original recipe used this bourbon, we wanted to use it too.

Who are we kidding? The name synergy of Bulleit is too great to ignore. There’s also a bourbon out there called Gun Fighter but that one is produced in Colorado.

Since we were able to find Bulleit at a Lisbon liquor store, you should be able to find a bottle where you live. If not, just use your favorite bourbon instead.

Tia Maria is the coffee liqueur used in the original Revolver recipe. Produced in Italy and with roots in Jamaica, its ingredient list includes arabica coffee beans along with Jamaican rum, sugar and vanilla. Its ABV is 20%.

We bought a bottle of Tia Maria specifically to craft this cocktail and we’re glad we did. The tasty liqueur will surely make its way into future White Russians that we craft at home.

Since we previously bought a bottle of Angostura orange bitters to craft Bijou cocktails, we already knew that we liked its spicy orange flavor. Made with orange extracts and spices, a little bit goes a long way as these bitters have a 28% ABV.

Buy bottles of Boubon, Coffee Liqueur and/or Angostura Bitters from Drizly or Total Wine if you live in the US.

How To Craft a Revolver Cocktail

In addition to being both boozy and caffeinated, the Revolver cocktail offers a third benefit to lazy mixologists. Its recipe is super easy and doesn’t require any special bar tools. For our recipe, we used the following equipment:

Don’t worry if you don’t have any or all of these tools. Each is inexpensive. Plus, you can improvise in a pinch if you don’t already own them.

After assembling the ingredients, the first step is to measure the bourbon and coffee liqueur. We use a Japanese jigger in this and other recipes to secure accurate measurements and minimize spillage.

The next step is to pour the two liquors into a mixing glass immediately after you measure each. We often use the base of our Boston shaker but any sturdy vessel will suffice.

Immediately add two dashes of orange bitters directly into the mixing glass or, in our case, shaker.

After adding a couple handfuls of small ice cubes, mix the cocktail until the three liquors are combined and chilled.

Strain the cocktail into a glass. We like to use a small martini glass but a coupe glass would work well too.

The final step is to add an orange twist garnish.

If you’re hardcore, you can flame the orange peel as was done in the original Revolver recipe. As for us, we were satisfied without the fiery citrus show.

We consider the Revolver cocktail recipe to be smashing as is but it may not hit your target. Here are some alternatives if that’s the case:

What is a Revolver cocktail?

The Revolver is a bourbon cocktail crafted with bourbon, coffee liqueur and orange bitters.

Where was the Revolver invented?

The Revolver was invented in San Francisco.

What are the ingredients in a Revolver cocktail?

Is the Revolver shaken or stirred?

The Revolver is stirred, not shaken.

What type of glass is best for the Revolver?

Pretty sure Bruno’s closed in the 90s.

I checked and it appears that our cited source is incorrect. Thanks for taking the time to let us know!