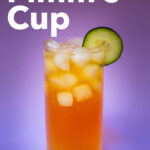 The Pimm’s Cup may hail from London but the refreshing tipple is equally popular across the pond in New Orleans. We share the story behind the transcontinental cocktail as well an easy Pimms Cup recipe that you can craft at home in just five minutes.

London and New Orleans may be almost 5,000 miles apart but the two cities share a few commonalities.

For starters, they rank as two of the world’s best food cities as well as two of our favorite places to visit. But more important, at least to cocktail connoisseurs and thirsty travelers, both cities share a passion for a certain cocktail…

And that cocktail is the Pimm’s Cup.

What Is the Pimm’s Cup Cocktail?

The Pimm’s Cup is a refreshing cocktail concocted with Pimm’s No. 1, a gin-based liqueur, that’s ideal for sipping either at Centre Court at Wimbledon or a New Orleans bar. It’s odd but true that the cocktail is equally popular in the two disparate cities separated by an ocean.

In fact, the quintessential British cocktail is so popular in New Orleans that some people assume that it was invented at a NOLA bar instead of a London pub. Since a savvy Napoleon House’s mixologist doctored the Pimm’s Cup recipe to include 7-Up plus a cucumber wheel in the 1940s, perhaps it’s a New Orleans drink after all.

It’s certainly a topic worth debating while drinking a Pimm’s Cup… or three.

History of the Pimm’s Cup Cocktail

The Pimm’s Cup is a cocktail with two distinct origin stories.

Its first origin story dates back to the 1840s when James Pimm first crafted the cocktail with a liqueur (Pimms No. 1) that featured gin and a secret roster of botanicals. The Pimm’s Cup is as popular today at spots like the Borough Market and Wimbledon as when Pimm invented it at a London oyster bar. Maybe even more so.

The second origin occurred a full century later when a doctored version of the Pimm’s Cup became the signature drink at the Napoleon House in New Orleans. It quickly achieved popularity due to its relatively low alcoholic content and refreshing citrus flavor.

Over the years, the Pimm’s Cup has retained its popularity both in London and New Orleans. Many food travelers, including us, like to pair Pimm’s Cup cocktails with Muffalettas, the New Orleans food favorite that’s also a staple at the Napoleon House.

NOLA’s version of the Pimm’s Cup cocktail has just five ingredients. These are the items you need to craft the New Orleans cocktail at home:

While the Napoleon House uses 7-Up in its recipe, your favorite lemon-lime soda will work in our recipe. The same goes for lemonade. Although we prefer to make our own lemonade by combining freshly squeezed lemon juice with simple syrup, you can use your favorite blend.

Pimm’s Cup No. 1 liqueur is the only non-negotiable ingredient in the Pimm’s Cup cocktail. This should be no surprise based on the name drink’s name. The gin-based liqueur has a 25% ABV, an amber hue and an herbaceous flavor. It’s what transforms the Pimm’s Cup from a citrus soft drink to a cocktail legend.

How to Craft a Pimm’s Cup

Crafting a Pimm’s Cup cocktail is super easy once you gather the handful of ingredients and a couple basic bar tools. We use the following tools to craft Pimm Cup cocktails at home:

You can improvise if you’re missing either or both of these bar tools. For example, you can use a small angled measuring cup instead of a jigger.

The first step is to measure the Pimm’s No. 1 liqueur and lemonade, immediately pouring each into a highball glass. We use a Japanese jigger to ensure accurate measurements and avoid spillage.

Click here to purchase a Japanese jigger if you don’t have a jigger or want an inexpensive upgrade.

The next step is to gently stir the Pimm’s and lemonade. We use a bar spoon but you can use any long spoon in your utensil drawer.

The third step is to fill the glass with ice cubes. You can use any size. We like to use medium cubes produced by our refrigerator’s ice machine.

After you fill the ice with glass, you’ll want to top it off with lemon lime soda. You can use 7-Up, Sprite or your favorite brand.

The final step is to add a slice of cucumber as garnish. All that’s left to do after this step is to sip and enjoy.

Crafting a classic Pimm’s Cup couldn’t be much easier. Here are a few ideas if you want to get creative with the base recipe: