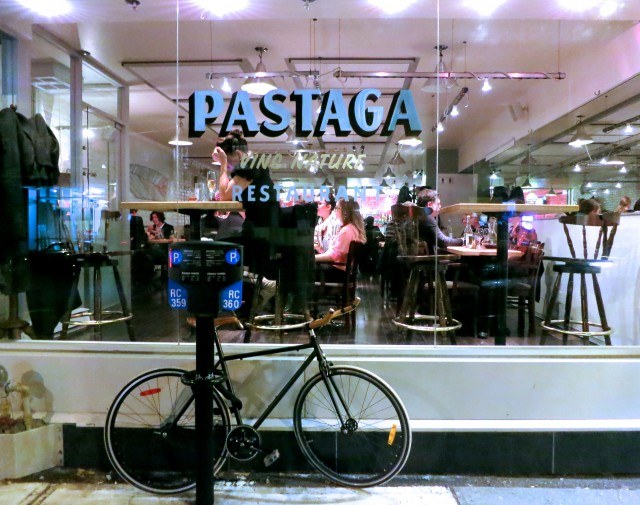 We loved our dinner at Pastaga. The restaurant features an exciting array of creative dishes, all perfect for sharing.

Pastaga
(Dictionary Definition:lang. pop.) Name given to liquor flavored with anise and licorice

The Montreal restaurant Pastaga is exciting – a restaurant that wholly expresses a Canadian chef’s vision of what a casual eating experience can and should be. The restaurant achieves this experience through sleek architecture, modern style, attentive service and, most importantly, delicious food.

American diners may not be familiar with Chef Martin Juneau. As we learned, he won a gold medal at the Canadian culinary championships in 2010 and has been a fixture in the Montreal dining scene since his tenure at Montée de Lait. Chef Juneau, along with partner Louis-Phillippe Breton, has crafted a space that epitomizes cutting-edge, sophisticated Montreal.

A welcoming glass storefront window leads into a dining room that can best be characterized as ‘industrial chic’. The dining room is arrayed with lights and giant factory plug strips.

Located behind a large glass window, the open kitchen/chef’s table/sports bar occupies the rear of the space. Chef Juneau, who claims to be a fairly shy person, lays every element of the kitchen for all to see from floor to ceiling.

In the same room, a long chef’s table sits in front of a large flat-screen television. The TV is probably there so that Chef Juneau can follow the Montreal Canadiens while he toils away at the stove.

Since our table was not yet ready, we were escorted to the small bar right near the open kitchen and offered complimentary glasses of Prosecco. During our short wait, we enjoyed a front row view of the bustling kitchen. 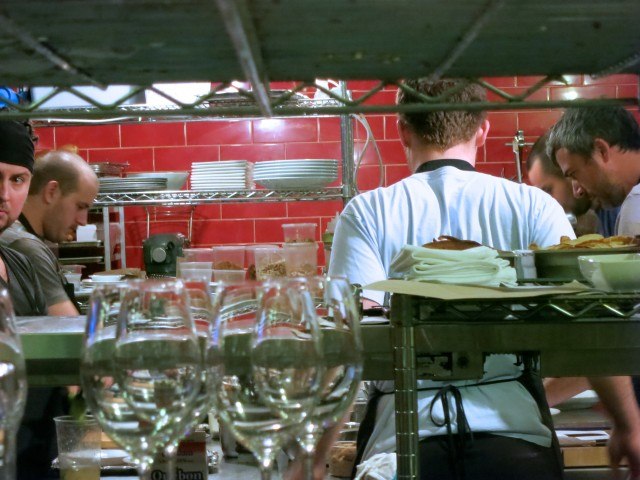 View of the Kitchen from the Bar

Once seated, we perused the large menu of organic wines. We selected a bottle of Carbone 14 grenache from Domaine Léonine in the Roussillon region. 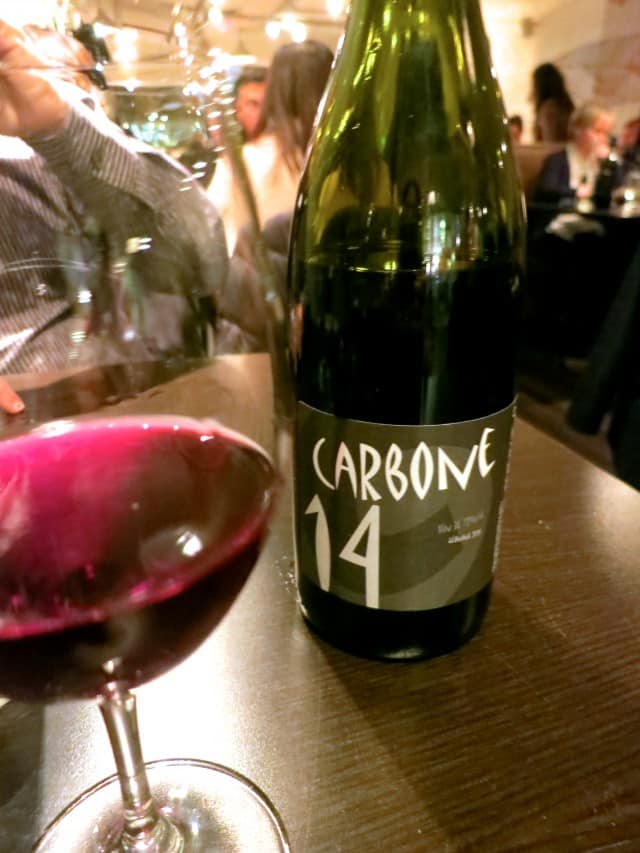 The Food at Pastaga

Ah, yes, but back to the food.

The restaurant, named after the Provençal name for Pastis, is reminiscent of The French region’s ‘apéro’ culture where food is served on small plates along with aperitifs and wines. At Pastaga, the food menu is divided into three sections: Salty (Salé), Cheese (Fromage), and Sweet (Sucré). To start the meal, we opted for four dishes off the Salé section – two cold starters and two hot second courses.

Our first starter was Omble de la Nouvelle-Écosse – slices of raw arctic char topped with char jerky. The buttery char contrasted deliciously with the chewy jerky. The dish was garnished in fine Scandinavian style with cream cheese and dill. 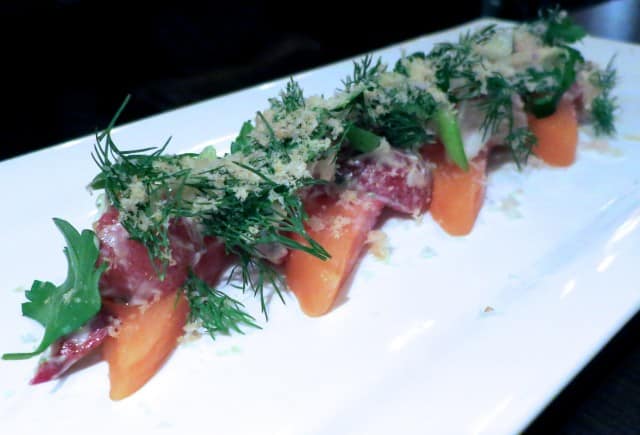 Served on a beautiful wooden plank, the chopped liver was both traditional and original at the same time. The chef created a daring yet rustic deconstruction of a centuries-old favorite. Our Jewish mothers would approve. 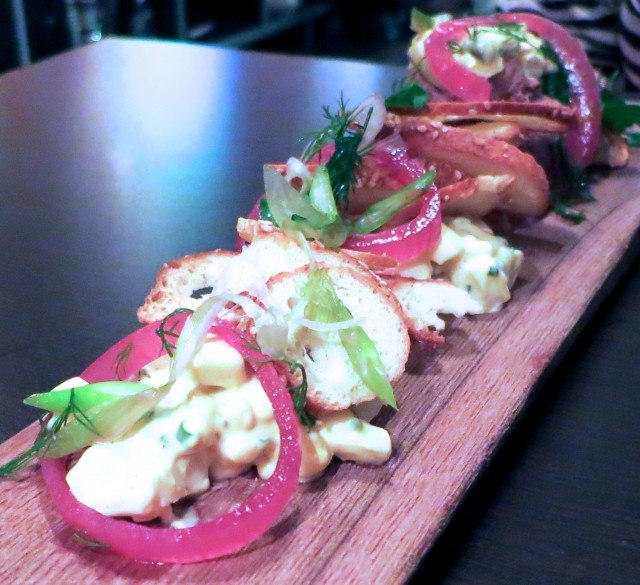 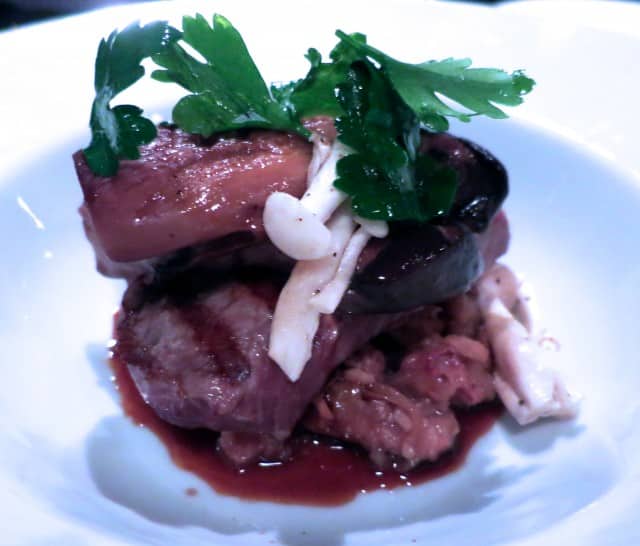 The pork belly was garnished with sliced apples and served over a comforting pancake. And, this being Quebec, it was, of course, served with maple syrup. 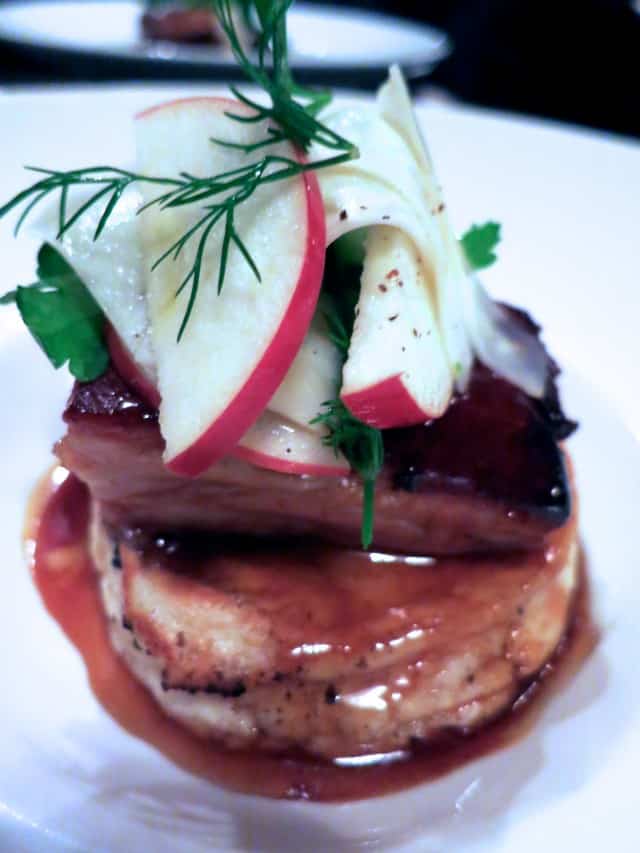 We don’t normally order a cheese course in Philadelphia, but we couldn’t resist the raw milk cheeses at 12 cents per gram. We opted for a small piece of Ossolano as a transition between the savory fist courses and into dessert. 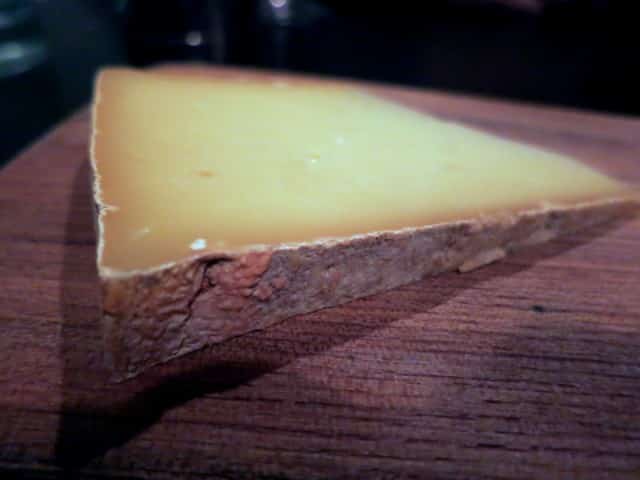 For dessert, we opted for the beignets with dense caramel ice cream, apple parfait and dehydrated apple chips. 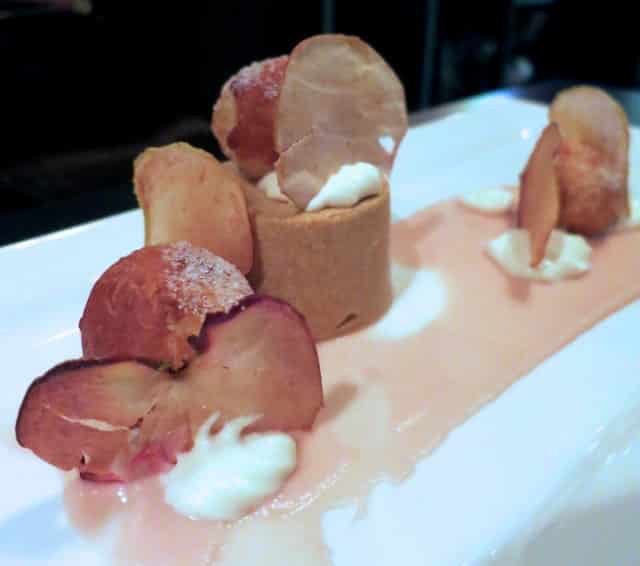 Although carrot cake is not Mindi’s favorite, we were compelled to also try Pastaga’s version based on the server’s exuberant recommendation.

This carrot cake was toasted and topped with a pineapple caramel sauce and came with a side of mascarpone cheese – all topped with caramelized shaved carrots. The slightly crunchy cake’s flavor was earthy without being mealy, and the shaved carrots surprised us as with their sweet flavor. 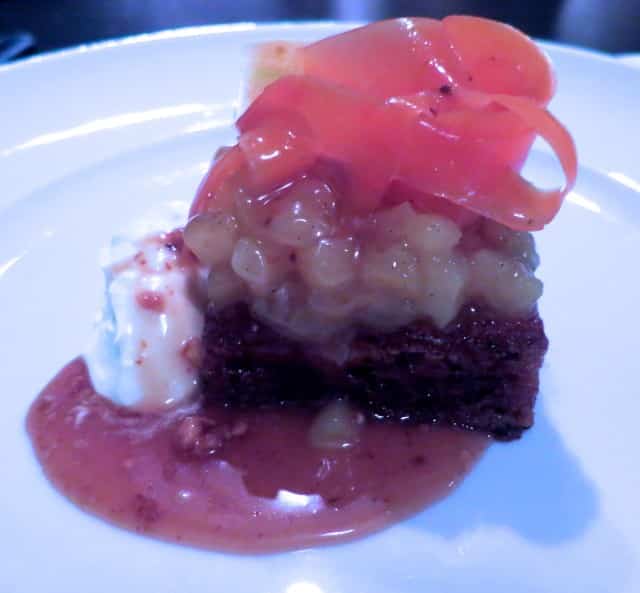 Thoughts about our Dinner at Pastaga

For us, Pastaga’s greatest strength was consistency. Most restaurants have at least one weak course, but every dish at Pastaga was strong. Plus, the service was both friendly and efficient, a fine reflection of the restaurant’s welcoming neighborhood atmosphere.

With so many great choices, it’s hard to choose a “bad” restaurant in Montreal. For us, this visit involved a large process of elimination based on the exponential growth of fine eating options. In fact, we almost didn’t make it to Pastaga for dinner, but we switched reservations from a stalwart to try something new. We’re certainly glad that we did.

After eating at Pastaga, we have yet another reason to love Montreal and the Montreal restaurant scene. 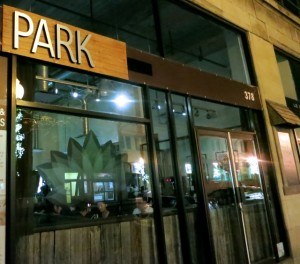 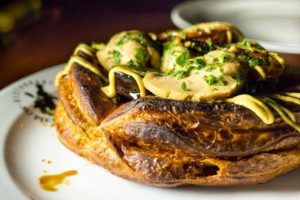 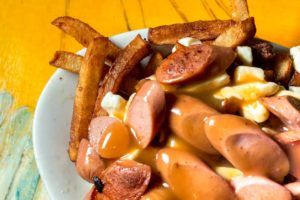