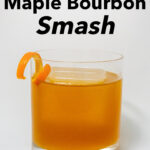 We started our journey into lazy mixology as a fun side project in 2020 after the world shut down. And, to our pleasant surprise, we discovered a shared passion for both crafting and drinking cocktails that has continued with no sign of ending.

This journey has introduced us to drinks that we like and others that we love. A few, like the Maple Bourbon Smash, have joined our short list of cocktail favorites.

What Is a Maple Bourbon Smash?

First, amber-colored Grade A Maple syrup adds a rich sweetness to the Maple Bourbon Smash that’s the opposite of cloying.

The Bourbon Maple Smash cocktail may be the ultimate pantry cocktail based on its familiar list of ingredients:

Selecting the right liquor is a priority when you craft a cocktail with just a few ingredients. We choose to use Four Roses bourbon when we craft Maple Bourbon Smashes at home.

Typically produced in Vermont and Canada, maple syrup is a product usually served with pancakes, french toast and waffles. In a culinary twist of fate, the natural sweetener is a great cocktail ingredient too.

We like to use amber Grade A maple syrup when we craft Maple Bourbon Smash cocktails at home to achieve the rich flavor that we adore. Canadian cities like Montreal sell the sweet elixir in cans at local markets. In Lisbon, we consider ourselves lucky to have found bottles of Canadian maple syrup at a nearby grocery store.

How To Craft a Maple Bourbon Smash

Despite being highly potable, the Maple Bourbon Smash is ridiculously easy to craft at home.

Our recipe only has a few ingredients and doesn’t require any special tools or equipment. Since we don’t literally smash the orange, the only equipment we use are a Japanese jigger, bar spoon and cocktail strainer.

The first step is to measure the bourbon, maple syrup and freshly squeezed orange juice. We like to use a Japanese jigger to avoid spillage and ensure accurate measurements.

The second step is to pour the three liquids into a mixing glass after you measure each. We typically use the base of our Boston Shaker but any mixing glass will work just fine.

The third step is to add ice to the mixing glass (or shaker base) and stir the liquids with a bar spoon until they’re mixed and chilled. This step should take about 20 seconds.

The fourth step is to drop a jumbo ice cube into a lowball glass. While you could you use smaller ice cubes, the jumbo ice cube melts more slowly and doesn’t dilute the cocktail. Plus, it looks super sophisticated and will impress your friends.

Buy a jumbo ice cube tray from Amazon. It’s a bit of a splurge but will pay for itself before you know it.

The final step is to strain the cocktail into a lowball glass and add an orange twist as garnish.

We like to express the rim of the glass with the orange twist and recommend that you do the same.

Buy lowball glasses from Amazon if you want a matching set.

Even if you fall in love with this Bourbon Maple Smash recipe, you may want to experiment to make it your own. Here are some ideas to get you started:

What are the ingredients in a Maple Bourbon Smash?

What’s the best bourbon to use in a Maple Bourbon Smash?

Is the Maple Bourbon Smash shaken or stirred?

The Maple Bourbon Smash is stirred, not shaken.

What type of glass is best for the Maple Bourbon Smash?

PS. This drink should also be made with muddled orange rather than juice. Muddling the orange, pith, peel and all, realeases oils and bitter flavor components that subtly enhance the drink. It only adds a few seconds and some elbow grease to the prep, but it adds dimensions of flavor to the finished product!

This drink is much better shaken, as are all drinks made with a significant amount of juice, aquafava or egg (white and/or yolk). These ingridents aerate when shaken, building body and making the drink much more interesting. Please keep stirring drinks without these ingredidents, but otherwise, shake away!