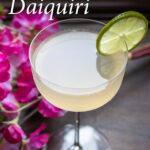 Also known as a Papa Doble, the Hemingway Daiquiri takes the simple Daiquiri to a new level with two simple additions. Read on to discover how Ernest Hemingway got his name on the drink and learn how to make a Papa Doble at home.

The Hemingway Daiquiri is an anomaly.

With its pink hue and fruity flavor, this shaken cocktail looks and tastes like a liquor lightweight. Some might even call it a girly drink. But make no mistake – the Hemingway Daiquiri is a serious cocktail with an ample amount of alcohol that can sneak up on any drinker who’s not careful.

As it turns out, the Hemingway Daiquiri has an interesting history that involves one of the least girly authors to ever travel to the cocktail’s home country of Cuba. It’s also a cocktail that tastes so great that you’ll want to drink two, maybe three, once you give it a try.

What Is the Hemingway Daiquiri?

Named after Ernest Hemingway and nicknamed both Papa Doble and Hemingway Special, this classic cocktail is a Daiquiri variation that adds ruby red grapefruit juice and maraschino liqueur to the classic cocktail’s recipe. More than just window dressing, these two extra ingredients simultaneously add a subtle sweetness and bright, tart flavor to the simple sipper.

Legend has it that Hemingway inspired his namesake cocktail when he ordered a Daiquiri without sugar and double the rum. Though the recipe has evolved over the years, it’s difficult, if not impossible, to forget the story where it all began.

History of the Hemingway Daiquiri

The history of the Hemingway Daiquiri is a doozy thanks to the two key characters involved in the classic cocktail’s origin story. One was bigger-than-life author Ernest Hemingway and the other was master mixologist Constantino Ribailagua.

As famous for his voracious appetite as for his prolific writing, Hemingway lived at Havana’s Hotel Ambos Mundos during the 1930s. At that same time, Ribailagua was an equally prolific bartender at Havana’s El Floridita bar. Considering the mere 750 meter distance between the Hotel Ambos Mundos and El Floridita, it was only a matter of time before the two would meet.

As described in this NPR article, the Hemingway Daiquiri owes its creation to a productive pit stop at El Floridita. Not only did Hemingway find a restroom during his sojourn, but he also made cocktail history by custom ordering a Daiquiri with less sugar and more rum.

As for Hemingway, he proceeded to drink many more Cuban cocktails at El Floridita over the years, typically ordering double drinks with four ounces of rum in each glass. Papa clearly liked his doubles. Or, we should say, his Papa Dobles.

Buy To Have and Have Another – A Hemingway Cocktail Companion from Amazon and read the story about the time that Hemingway drank 17 cocktails at one sitting as well as other drinking adventures.

These are the ingredients required to craft a Hemingway Daiquiri at home:

We go one step further by adding simple syrup to our Hemingway Daiquiri recipe. We find that this addition cuts the cocktail’s tartness and balances its competing flavors.

Luxardo produces our preferred maraschino liqueur which is not surprising since we’re obsessed with the Italian company’s maraschino cherries. We had to special-order this liqueur and it was totally worth it. Not only can we use it to craft Hemingway Daiquiris, but Luxardo maraschino liqueur is a key ingredient in Aviation and Martinez cocktails too.

We use Bacardi White Rum to craft this and other rum-based cocktails. Any decent white rum will work in this recipe.

Buy bottles of Maraschino Liqueur and/or White Rum from Drizly or Total Wine if you live in the US.

How To Craft a Hemingway Daiquiri

Like all classic cocktails, the Hemingway Daiquiri is easy to make and doesn’t require any special bar tools. That being said, we used the following items to prepare this recipe:

None of these tools are required but they will make your mixology experience better. You may also want to use a citrus juicer if you have one on hand.

The first step is to squeeze the juice if you have access to fresh fruit. This is a great time to cut a lime wheel while the lime is still intact.

The next step is to measure the white rum, maraschino liqueur and simple syrup. Although the simple syrup is optional, we include the natural sweetener whenever we craft Hemingway Daiquiri cocktails at home. We like to use a Japanese jigger to easily achieve accurate measurements.

Buy a Japanese Jigger from Amazon if you need a jigger or want an inexpensive upgrade.

Immediately pour each liquid into a shaker. We like to use a Boston Shaker for this step.

Buy a Boston Shaker if you need a shaker or want an upgrade. Buying one was a cocktail game changer for us since it doesn’t leak or spill.

Strain the cocktail into a coupe glass.

Buy a pair of Riedel coupe glasses from Amazon.

Once you strain the Hemingway Daiquiri into a coupe glass, all that’s left to do is garnish the cocktail with a lime wheel. Although you could gently drop the lime wheel directly into the drink, we prefer to place ours on the glass rim instead.

We suspect that you’ll love this recipe so much that you wont need any alternatives. However, here are some ideas if you want to experiment:

What is a Hemingway Daiquiri?

The Hemingway Daiquiri is a sophisticated twist on the classic Daiquiri crafted with ruby red grapefruit juice and maraschino liqueur.

Where was the Hemingway Daiquiri invented?

The Hemingway Daiquiri was invented at the El Floridita bar in Havana, Cuba.

Why is it called a Hemingway Daiquiri?

The Hemingway Daiquiri was named after Ernest Hemingway. The prolific writer inspired the cocktail’s creation since he was also a prolific drinker.

The Hemingway Daiquiri tastes sweeter and tarter compare to a classic Daiquiri.

What are the ingredients in a Hemingway Daiquiri?

What’s the difference between a classic Daiquiri and a Hemingway Daiquiri?

The Hemingway Daiquiri takes the classic Daiquiri to the next level with the addition of ruby red grapefruit juice and maraschino cherry liqueur.

Is the Hemingway Daiquiri shaken or stirred?

The Hemingway Daiquiri is shaken, not stirred.

What type of glass is best for the Hemingway Daiquiri?

I also created a grapefruit-free version of the Hemingway Daiquiri for those on cholesterol (statin) drugs, I call it the Statin Islander, here's how:

Shake well with ice, strain into a chilled coupe. Miraculously, the Campari and Cointreau create the flavor of grapefruit, which people taking cholesterol meds should avoid

Thanks for mentioning my book, To Have and Have Another! We love Lisbon, by the way, and will have to look you up next time we visit. Philip Greene

It was our pleasure! Please look us up - we can drink Hemingway Daiquiris when you're in town. Will be fun.

You omitted the simple syrup in the mixing instructions.

Thanks for bringing the omission to our attention. Cheers!