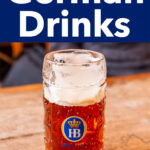 Drinking is one of our favorite things to do in Germany. Discover the ten German drinks we always imbibe when we travel to cities like Berlin and Hamburg.

If you ask ten random people what to drink in Germany, most likely all ten will say beer. That’s how famous German beer is around the world.

But beer is just one of many great beverages to imbibe in Germany and it’s not even the most popular German drink. That honor goes to sparkling mineral water. This is a country where the drinks are as beloved as the food. And, in some cases, maybe even more so.

German Drinks Guide | What to Drink in Germany

From Apfelwein (apple wine) to Apfelschorle (apple spritzer), Germans love to drink as much as we do, maybe more. Like many, we consider beer to be one of the top German beverages and the one we order first whenever we arrive in Germany. But beer is just one of many German beverages that we love.

Read on to discover our top ten favorite things to drink in Germany. Spoiler Alert – None of our favorite drinks from Germany involve apples.

Despite Germany’s strong association with beer, Germans didn’t invent the boozy beverage. That accolade goes to ancient people in countries like Egypt and Mesopotamia who transformed barley into beer more than 5,000 years ago. Germany was relatively late to the party when German monks started brewing beer during the middle ages.

Fun Fact
Since drinking is prohibited by Islamic law, it’s currently impossible to buy beer and other alcoholic beverages legally in most countries located in the part of the world where beer was invented.

Those German monks lit a flame that turned into a fire. Germans are still hot for beer crafted with barley malts, hops and water following the spirit of Reinheitsgebot, also known as the Germany Beer Purity Law of 1516.

Despite that pivotal law which started in Bavaria and expanded its scope within Deutschland, German beer isn’t one trick pony. Instead, the variety of German beer varietals is astounding. After downing numerous steins of beer in Germany, these are our favorites:

The German word dunkel literally translate to dark and that’s a great word to describe Dunkel beer. Another great word is malzig (i.e. malty) and yet another is süßlich (i.e. sweet).

Particularly popular in Munich and the rest of Bavaria, dark, malty, sweet Dunkel beers aren’t overly hoppy and sport flavors like caramel and chocolate. However, don’t assume that it’s a dessert beer. Served from taps and in bottles, Dunkels pair well with German food favorites like Bratwurst and Sauerbraten for those who like to eat and drink at the same time.

Pro Tip
Order a Schwarzbier if you want to drink an even darker German beer. Schwarzbier literally translates to black beer.

Germans weren’t the first to brew beer and they can’t claim credit for inventing Pilsner. The pale, sweet lager actually hails from the Czech town of Pilsen. However, Germany get props for turning Pilsner into a global phenomenon.

Not only is Pilsner the most popular beer in Germany, but Germany’s version has also spanned the globe. We’ve sipped pints of Pilsner at bars in our home town of Philadelphia and as far away as Cape Town. However, there’s nothing better than sipping Pilsner from a ginormous stein at Munich’s annual Oktoberfest.

Some of the best German beers are regional while others are linked to certain cities. Great examples are Altbier which is specific to Düsseldorf and Berliner Weisse which hails from Berlin. Then there’s Kölsch which many consider to be the jewel of Cologne.

Cologne brewers craft Kölsch according to rules set in 1986 at the Kölsch Convention. Kölsch beer achieved protected geographic indication (PGI) status within the European Union a decade after that convention.

While we like Cologne’s crisp, pale lager, we love the city’s rituals centered around its beer. Locals typically drink Kölsch in tall, skinny glasses at a kneipe (i.e. pub) or brauhaus (i.e. beer house). They start by clicking the bottom of their first glasses while exclaiming “Prost” with glee. Servers called köbes keep bringing more beer until each drinker waves a proverbial white flag by placing a coaster on top of his or her glass.

Our favorite three German beers may or not be your favorites too. The only way to find out is to taste them all.

We recommend starting with the following German beer styles that range from fruity Hefeweizen to smokey Rauchbier:

Glühwein is reason enough to visit Germany during the holiday season. Literally translating to mulled wine, Glühwein is hot mulled wine typically made with red wine and exotic spices like cinnamon, cloves and star anise.

Buy Glühwein spick mix from Amazon so that you can drink Glühwein at home.

We’ve imbibed hot mulled wine in various European countries including Estonia, Finland and Portugal. However, German Glühwein is our favorite by a mile. It’s especially fun to drink Glühwein at festive Christmas markets where the chance to buy a souvenir Glühwein mug is priceless.

Discover what it’s like to drink Glühwein at Hamburg Christmas markets.

American college kids down shots of Jägermeister, the popular German herbal liqueur, with gusto. While some of those students go the extra mile by crafting Jäger Bombs with Red Bull, we wonder if any of those collegiate drinkers really understand what they’re drinking.

More than just a party perennial, Jägermeister is an herbaceous digestif with over 50 herbal ingredients in its recipe. Curt Mast invented Jägermeister in Wolfenbüttel back in 1934. Almost a century later, green bottles of Jägermeister can be easily found at bars around the world.

Buy a bottle of Jägermeister from Drizly or Total Wine if you live in the US.

Germany’s Schnapps is a distilled spirit made with local, seasonal fruits like apricots, plums and cherries. But don’t be fulled by the fruity flavors. Also called Obstler in Germany, Schnapps is far from a light liquor.

With ABVs often ranging from 30-40% and sometimes higher, Schnapps is a drink best sipped in moderation. We recommend doing so next to a fireplace for maximum enjoyment.

When most people think about German wine, they think about one specific varietal – Riesling. While bottles of Riesling runs the gamut from sweet to dry, riesling grapes are far from the only grape grown in Germany.

The country has 13 wine regions and even more wine varietals. And, as we learned while visiting Baden-Baden in the Baden wine region, wines like Pinot Noir and Müller-Thurgau produced in Germany compare favorably to wines produced in countries like Italy and France.

To be clear, Germans didn’t invent hot chocolate. That honor goes to the Mayans. However, drinking Germany’s Heiße Schokolade topped with whipped cream on a cold winter day is nothing short of heavenly.

Kaffee Kirsch sounds so innocent and tastes so good. However, this cherry coffee beverage topped with whipped cream packs a punch thanks to one special ingredient – Kirsch.

In addition to providing the drink’s cherry flavor, Kirsch provides an alcoholic kick. The translucent brandy distilled with sour cherries has a 40% ABV.

For those with an affinity for cherry liqueurs, Kirsch can be sipped on its own and added to cocktails. It’s also a key ingredient in Germany’s most iconic dessert – Schwarzwälder Kirschtorte (i.e. Black Forest Cake).

Berlin claimed its stake in the specialty coffee zeitgeist in 2010 when The Barn opened in Berlin and started distributing its beans to European cities like Lisbon, Lyon and Paris. But Germany’s coffee role is bigger and older than it seems.

Germany’s coffee history dates back to the 17th century when cities like Hamburg opened their first coffee houses. Years later, with the start of its initial coffee exchange in 1887, the northern German port city became a leading coffee player and one of the world’s major green coffee trading centers.

Today, the Port of Hamburg imports approximately 700,000 tons of coffee each year while exporting 400,000 to countries in Eastern Europe and Scandinavia. Within Germany, Berlin and Hamburg have dozens of coffee shops serving flat whites and pour overs. Smaller cities like Baden-Baden, Düsseldorf and Nuremberg have independent coffee roasters and cafes too.

Hungry for More in Germany?

Check out our guides with the best food and desserts in Baden-Baden, Berlin and Hamburg.

Love your website. Looking forward for more details information as time goes by

Gewürztraminer is French from Alsace in, you guessed it France. I agree it's great with any kind of seafood.