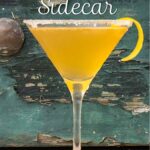 The Bourbon Sidecar cocktail takes the classic Sidecar to new heights by replacing cognac with bourbon. Follow our easy Bourbon Sidecar recipe and craft one at home in just five minutes.

Our exploration of bourbon cocktails has taken a twist. A lemon twist to be exact.

The bright flavors in the classic Sidecar speaks to us as we stand on the cusp of a new season. While winter hasn’t let go, we see glimmers of spring with each day lasting a bit longer than the last.

But, with a lingering chill in the air, bourbon speaks to us as well. Hence our decision to craft a Bourbon Sidecar instead of a classic Sidecar.

What Is a Sidecar?

The Sidecar joined achieved classic status in 1948. That’s when David A. Embury included the sour bourbon martini in the short list of cocktail classics featured in his The Fine Art of Mixing. The Daiquiri, Jack Rose, Manhattan, Martini and Old Fashioned round out this list.

Buy a copy of The Fine Art of Mixing Drinks from Amazon.

The classic Sidecar recipe is both simple and sophisticated with just three ingredients – cognac, orange liqueur and fresh lemon juice. While some mixologists use brandy or Armagnac instead of cognac, we decided to craft ours with Kentucky bourbon.

History of the Sidecar

Depending on what you read and choose to believe, the Sidecar cocktail was either invented in London or Paris. In other words, the Sidecar’s point of origin is a mystery.

We can at least be certain that the Sidecar was invented in the early 1920s soon after Prohibition ended and that it was named after a motorcycle sidecar. Or was it?

Let’s just say that we’re creating our own Sidecar history and leave it there. As of now, we have two cocktails down and many more to go.

The Bourbon Sidecar fits into our lazy mixology playbook with an incredibly short list of ingredients that includes:

Selecting the right liquor is critical in a cocktail with just a few ingredients. We chose to use Four Roses Bourbon and Cointreau to craft our Bourbon Sidecar.

Four Roses is a great cocktail bourbon since its flavors are relatively mild with hints of both vanilla and caramel. It’s also one of the more affordable bourbons produced in Kentucky and has a 40% ABV, the lowest possible ABV for Kentucky bourbon.

Buy bottles of Bourbon and/or Cointreau from Drizly or Total Wine if you live in the US.

How To Craft a Bourbon Sidecar Cocktail

We didn’t realize how easy it is to craft a Bourbon Sidecar until we crafted one at home. Not only is the ingredient list short, but no special tools or gadgets are required.

The only required tools for this recipe are a jigger, cocktail strainer and Boston shaker. We already have all three in our home bar. Hooray!

We like to coat the rim of our martini glass with sugar when we craft Bourbon Sidecars at home. This extra step adds a sweetness to the sour bourbon cocktail that we prefer.

If you’ve never created a sugared rim before, rest assured that it’s easy. You just need to rub the glass rim with a lemon wedge before dipping the glass onto a plate topped with sugar. You’ll want to rotate the glass a few times until it’s properly coated.

If you’ve chosen to sugar your glass rim, set the glass aside. It’s now time to craft the cocktail.

The first step in our Bourbon Sidecar recipe is to measure the bourbon, orange liqueur and lemon juice. We do this with a jigger but you could use a mini angled measuring cup instead.

As you measure each liquid, pour it directly into your cocktail shaker. We use a Boston shaker which has literally changed our mixology life for the better. It’s as easy to use as it is to clean and it doesn’t leak. Hooray again!

Buy a Boston shaker from Amazon if you need a shaker or if you’re ready for an upgrade. It’s a lazy mixology game changer.

The second step is to add ice to the shaker and vigorously shake the drink until it’s both chilled and combined. After about 30 seconds, use a strainer to strain the liquid into a cocktail glass. We use a small martini glass for this cocktail though a coupe glass would work equally well.

The final step is to garnish your cocktail with a lemon twist.

Pro Tip
Peel the lemon skin before you squeeze juice from the lemon.

After you follow our Bourbon Sidecar recipe, you may be satisfied to drink this version forever. However, if you’re keen to experiment, we recommend starting with the following options:

Pro Tip
Do NOT replace the bourbon with gin. We (mistakenly) tried this variation and were not pleased with the result

What are the ingredients in a Bourbon Sidecar?

What’s the best whiskey to use in a Bourbon Sidecar?

Is the Bourbon Sidecar shaken or stirred?

The Bourbon Sidecar is shaken, not stirred.

What type of glass is best for the Bourbon Sidecar?

Lemon juice is listed as an ingredient but not in instructions.

Thanks for your feedback. We have updated the recipe card accordingly.

Your recipe says Gin. I thought it was a recipe for a Bourbon Sidecar. Total lack of attention. Boo.

Thanks for alerting us to the error since, as noted in the article, we do NOT recommend using gin in this cocktail.

Probably a typo, but I noticed that the recipe has gin listed, not burbon. Looking forward to trying it though

Definitely a typo and fixed. Thanks for the heads up and happy drinking!

Great article/recipe, until I got to the very end where you say under no circumstances to use gin, but then have the actual recipe mis-printed specifying "gin" instead of "bourbon". This is what happens when you mix Freud with liquor :-)

I (Mindi) clearly had gin on the brain since I even crafted this bourbon drink with gin the first go-around as alluded in the article. I have fixed the error and appreciate you alerting us to it. Now I'm wondering what Sigmund would think of this slip...