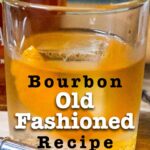 A Bourbon Old Fashioned is one of the most classic of classic cocktails. Follow our easy recipe to craft an Old Fashioned at home in just five minutes.

Some cocktails like Cuban Daiquiris hail from exotic destinations while others feature eclectic ingredients like cachaça in Brazilian Caipirinhas. The Old Fashioned doesn’t fit into either of these categories.

Living up to its name, this classic cocktail is the opposite of new and trendy. Despite its stodginess, the Old Fashioned ranks as one of the most popular cocktail at bars and lounges in the USA and beyond.

Buy a pair of Riedel old fashioned glasses on Amazon.

History of the Old Fashioned

The Old Fashioned is a classic American cocktail that dates back to the 19th century. While Louisville claims the drink as its own, the exact origin is as fuzzy as multiple Old Fashioned cocktails make us feel. Some historians link the drink to the days of the American Civil War though others go back further.

While numerous cocktails have come and gone over the past two centuries, the Old Fashioned has retained its relevance over the years. A Hollywood favorite, the drink hit its pop cultural apex as Don Draper’s preferred cocktail in the TV show Mad Men.

Our history with the Old Fashioned may have started while watching Mad Men but it solidified when we toured the Buffalo Trace distillery during our 2016 US road trip. That visit validated our appreciation for the premium Kentucky bourbon and motivated us to buy a bottle once we moved to Lisbon.

Before long, we were experimenting with Buffalo Trace recipes and crafting drinks at home with the Kentucky distilled liquor.

As lazy mixologists, we love that we can count the ingredients in a Bourbon Old Fashioned on one hand. These ingredients include a sugar cube, bourbon, bitters and orange peel as well as water (both room temperature and frozen).

We’re partial to jumbo sized ice cubes. Big chunky blocks displace more water, cooling the drink with every sip. They also take longer to melt and, let’s face it, they look as cool as Cary Grant in a railroad lounge car.

As noted above, Buffalo Trace is our preferred bourbon. With smooth flavors and hints of caramel and vanilla, the moderately priced Kentucky straight bourbon whiskey is a great bourbon choice for an Old Fashioned recipe.

Buy a bottle of Buffalo Trace bourbon from Drizly or Total Wine if you live in the US.

Adding Angostura bitters provides a spicy flavor with a kick. Not only does the herbaceous concoction contain more than 40 ingredients, but it also has a 44.7% ABV.

Buy a bottle of Angostura Bitters from Amazon.

How To Craft a Bourbon Old Fashioned

Despite its sophisticated flavors, the Old Fashioned is one of the easiest cocktails to craft at home. The drink only has a few ingredients and doesn’t require any special equipment except a jigger, muddler (or, if so desired, a mortar and pestle) and a bar spoon.

Muddling is a key step in our recipe. It’s also the most fun step as this is when the aromas start to drift out of the glass.

We like to spread the muddled sugar around the glass. Doing this primes the glass and distributes the flavor.

We mentioned that we like to use jumbo ice cubes and we weren’t kidding. We even bought a special jumbo ice cube tray for cocktails like the Old Fashioned.

We’re not going to lie – jumbo ice cube trays are relatively pricey but there’s nothing like popping out a giant cube and plopping it into a rocks glass.

Since Bourbon is the most important ingredient in a Bourbon Old Fashioned, this is not an ingredient to scrimp on. Instead, find your favorite bourbon and use it in this drink. We typically use Buffalo Trace. For us, this is the best bourbon for an Old Fashioned recipe.

If you don’t have access to Buffalo Trace where you live, we recommend using Four Roses, Makers Mark, Woodford Reserve or any other quality bourbon.

After gently stirring the cocktail, the last step is to express the glass with orange peel before dropping the garnish into the glass.

Expressing coats the rim with a light layer of orange oil that tempts the nose and tickles the taste buds.

We adore the simplicity of the classic Bourbon Old Fashioned recipe. However, we understand if you want to get creative by experimenting with the drink’s ingredients. Here are some ideas to pique your creativity:

Order a jar of Luxardo cherries from Amazon if you don’t already have a jar in your pantry.

What are the ingredients in a Bourbon Old Fashioned?

What’s the best bourbon to use in a Bourbon Old Fashioned?

Is the Bourbon Old Fashioned shaken or stirred?

The Bourbon Old Fashioned is stirred, not shaken.

What type of glass is best for the Bourbon Old Fashioned?

Who knows? Maybe you’ll be like us and fall in love with our classic Old Fashioned recipe. It’s both an oldie and a goodie.

Yea. It's not that difficult. If you don't have a sugar cube you can use 1/2 teaspoon of sugar and a teaspoon of water. And who cares about wasting an orange, you've had a couple of old fashioned's.

Wtf??? I'm totally ignorant about alcohol and mixed drinks, but would like to learn. This article gave me almost NO information on how to craft the drink. You go on and on about the ingredients, but the actual process??? Not much there. What the hell am I muddling? Do I waste an orange for a bit of peel? So disappointed in this article after it promised so much 🙄.

It's all right there in the recipe. You can even eat the orange a few days later if you place it in the refrigerator.