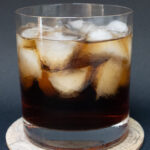 The Black Russian cocktail is more than just a White Russian without cream. Whether you’re curious about the dark drink or if you’re simply looking for a Black Russian recipe, you’ve come to the right place.

While the Black Russian’s story is almost as short as its recipe, the vodka drink’s flavor is as big as Siberia.

What Is a Black Russian Drink?

In simple terms, a Black Russian is a three-ingredient cocktail made with vodka, coffee liqueur and ice cubes. While it’s not necessary to measure the ice, the vodka and coffee liqueur must have a 2:1 ratio.

Although it’s easy to confuse a Black Russian cocktail with a White Russian cocktail, the two drinks have distinct differences. For starters, the Black Russian is as dark as coffee while its counterpart has a milky complexion. The chocolate brown cocktail also provides more of a kick without any mixers to dilute its alcohol components.

Plus, as a bonus, the Black Russian ticks the box for cocktail drinkers who are vegetarian and/or lactose impaired.

History of the Black Russian

The Black Russian and White Russian cocktails are the opposite of a ‘chicken and egg’ situation. Unlike their poultry peers, we know which drink came first – the Black Russian.

Cocktail lore attributes the creation of the Black Russian to a Belgian bartender named Gustave Tops.

The creative mixologist, who worked at the Hotel Metropole in 1940s Brussels, likely had no ties to Russia. Instead, he named the drink a Black Russian in recognition of the drink’s dark color and the homeland of vodka, one of the drink’s two liquors.

The Black Russian isn’t just easy to craft, it also has a super succinct ingredient list with the following three ingredients:

You can use your favorite vodka and coffee liqueur to craft a Black Russian.

Keeping to theme, we typically use Stolichnaya vodka. Although Stoli is currently produced in Latvia, the popular vodka has a long Soviet past.

However, there’s nothing remotely Russian about Kahlúa, our preferred coffee liqueur. Dark and rich, Kahlúa has always been produced in Mexico.

Buy bottles of coffee liqueru and/or vodka from Drizly or Total Wine if you live in the US.

How To Craft a Black Russian Cocktail

The Black Russian ties with the G&T in our unofficial contest for the easiest cocktail. It’s also a cocktail that only requires the following basic bar tools:

Don’t give up if you’re missing one or all of these tools. Instead get creative. For example, you could use an angled measuring cup instead of a jigger and a teaspoon or tablespoon instead of a bar spoon. Any glass will work though a lowball glass (also known as an old fashioned glass and rocks glass) is ideal for this particular cocktail.

The first step is to add ice to the lowball glass. We typically use ice ‘crafted’ by our refrigerator’s automatic ice maker.

The second step is to measure the two liquid ingredients. We use a Japanese Jigger to ensure accurate measurements and avoid spillage.

The third step is to pour each liquor directly into the ice-filled glass. You’ll want to do this doing this immediately after measuring each.

The final step is to stir the drink for a few seconds – no garnish or flourishes necessary.

We recommend trying a Black Russian in its pure form before adding additional ingredients. When you’re ready, the following alternatives will get you started:

What is a Black Russian cocktail?

A Black Russian is a three-ingredient cocktail made with vodka, coffee liqueur and ice cubes.

Why is it called a Black Russian?

The Black Russian’s name was inspired by the cocktail’s dark color and the homeland of vodka.

Where was the Black Russian invented?

Despite its name, the Black Russian was invented in Belgium.

What are the ingredients in a Black Russian?

What’s the best vodka for a Black Russian?

Any vodka will work in the Black Russian recipe.

Is the Black Russian shaken or stirred?

The Black Russian is stirred, not shaken.

What’s the best glass for a Black Russian?