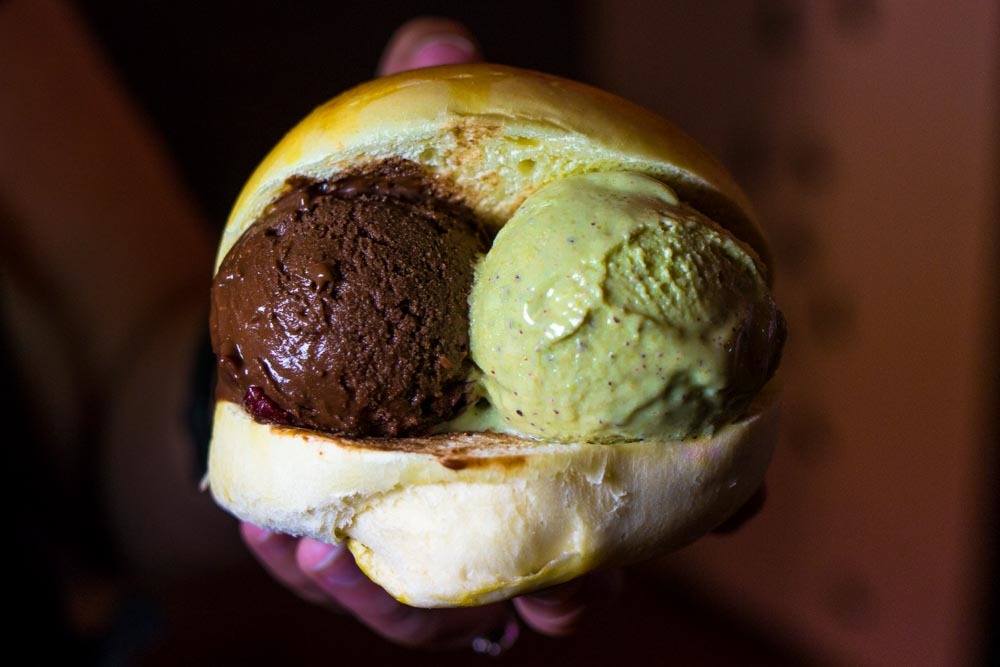 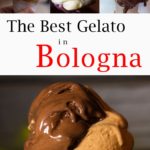 Life is too short for bad gelato. Read on to see our picks for the best gelato in Bologna Italy plus bonus picks in nearby Modena, Parma and Reggio Emilia. 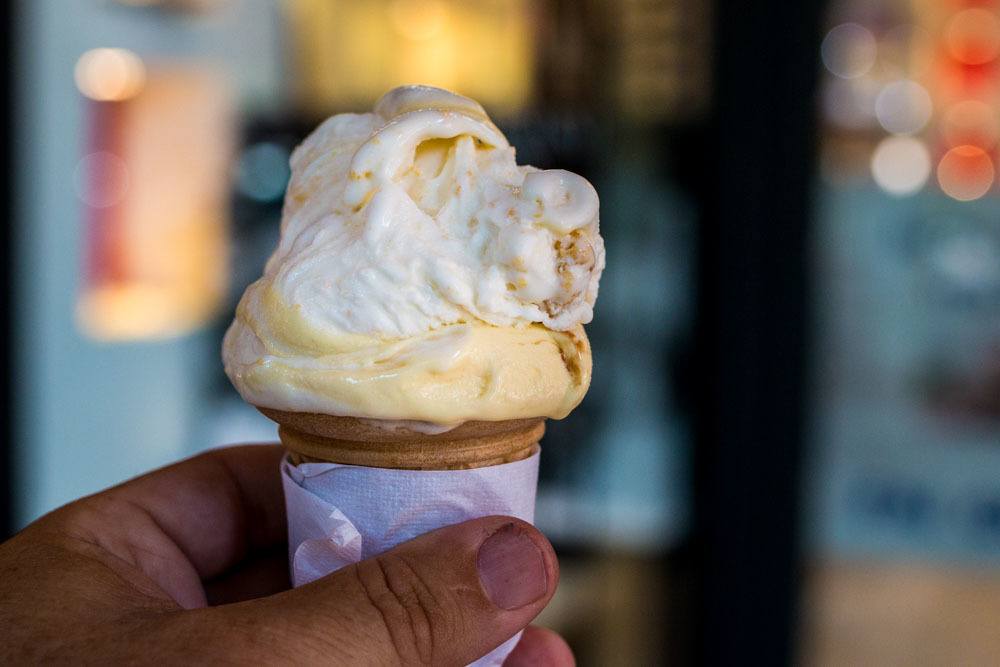 Eating gelato in Bologna is a stressful business. First, you have to decide on the size, either piccolo (small) or gigante (large). Then you must choose between a cono (cone) or coppetta (cup).

And that’s before the daunting task of choosing among a dozen or so tempting gelato flavors like pistachio, stracciatella and salted caramel. To make matters worse, the best Bologna gelaterias often have long lines of gelato lovers dealing with the same difficult decisions.

It’s a miracle we made it through over two weeks in Bologna in these conditions. As you can see from our photo, we weren’t happy at all. 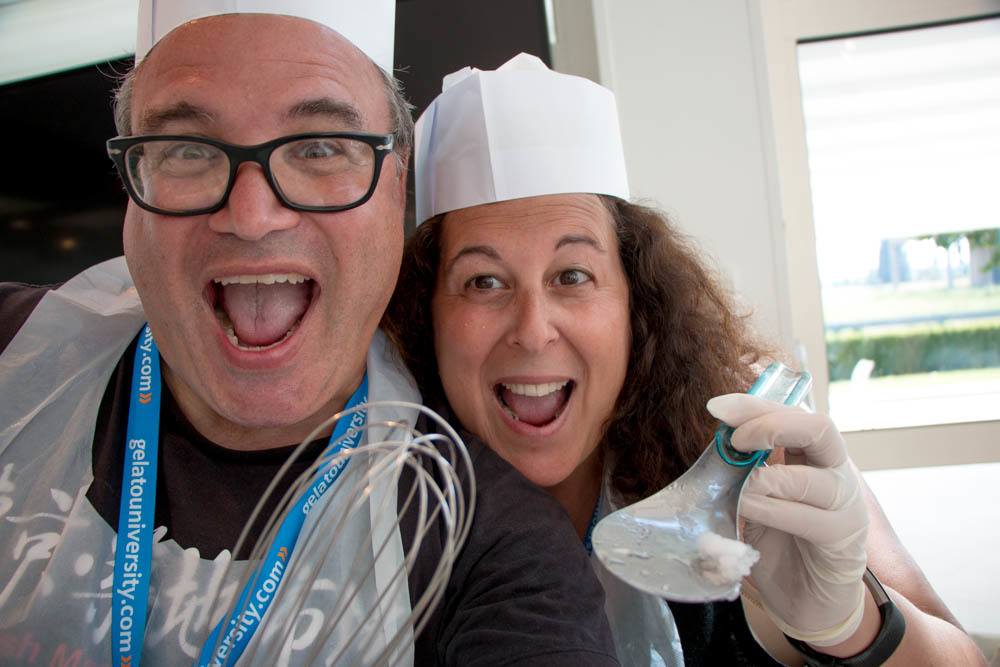 Now that we have your sympathy, we can admit the truth. We love everything about eating gelato in Bologna. We love the difficult decisions, the long lines and even the occasional surly service. Most of all, we love the taste and texture of creamy, dreamy Bologna gelato.

Though we’ve eaten great Italian gelato in cities all over Italy including Rome, Florence, Naples, Matera, Trento, Venice and Verona, we’ve never eaten better gelato than in Bologna. In fact, we rank eating gelato in Bologna as one of the top things to do in Emilia Romagna.

If you’re wondering what to do in Bologna – the answer is always to eat gelato. Seriously, eating gelato is one of the best food experiences in Bologna.

Tour Idea: Schedule a 3.5-hour food tasting and walking tour to explore the best food in Bologna including gelato.

The Best Gelato in Bologna 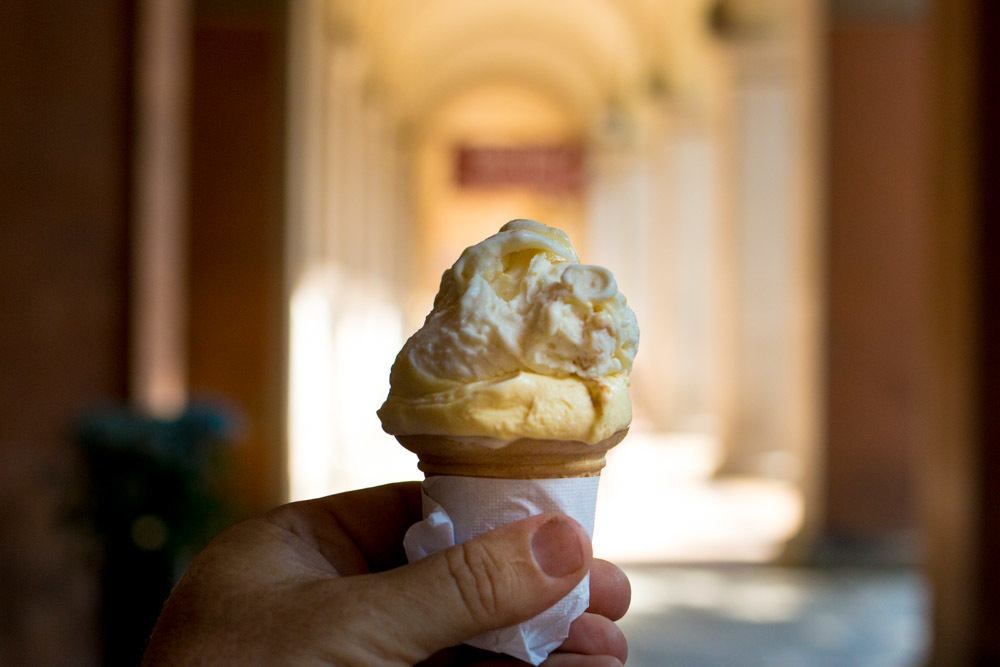 Gelato is particularly refreshing in the summertime, though it’s always the right time of year to eat gelato under a portico in Bologna.

Give us gelato or give us death!

Could we find the best gelatos in Bologna in just over two weeks during our recent visit? We answered this challenge with a rallying cry as we traversed the city and sampled top Bologna gelaterias before narrowing them down to a manageable list.

These are our favorite seven (rhymes with heaven) spots to eat gelato in Bologna plus bonus gelaterias in nearby Modena, Parma and Reggio Emilia: 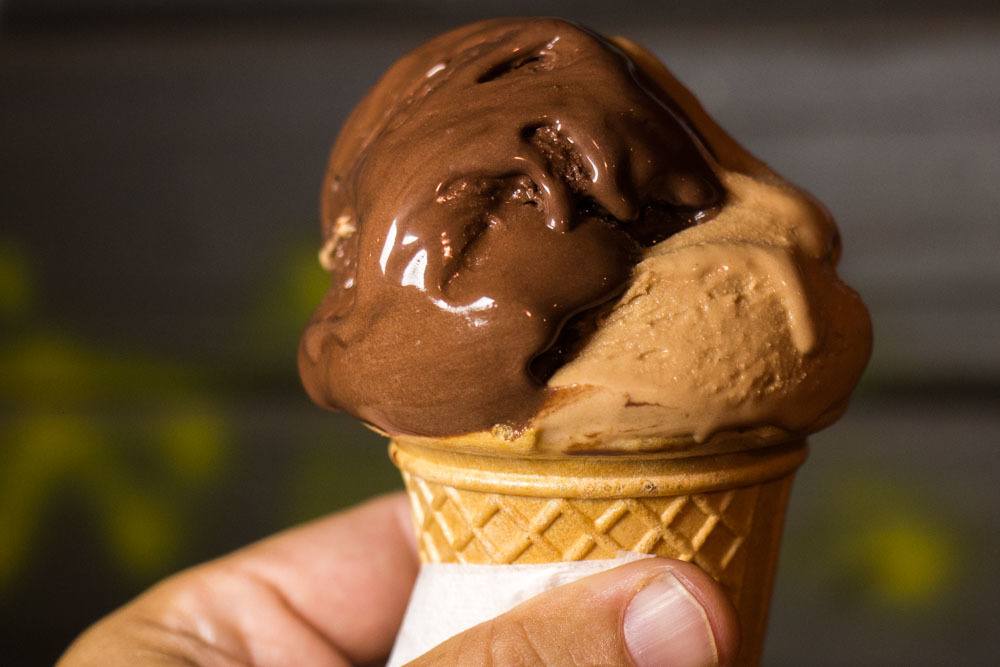 We ate a lot of chocolate gelato in Bologna, and this cone at Cremeria Santo Stefano was our favorite.

A tiny jewel box of a gelateria, award-winning Cremeria Santo Stefano stands out among the best Bologna gelaterias for its knock-our-socks-off flavor and stylish decor.

We loved the intensity of gelatos like Budino di Provenza, Speculoos and Pistacchio Salato del Bosforo during our multiple visits to Cremeria Santo Stefano. However, it was the Cioccolato del Santo gelato that truly blew us away with its deep chocolate flavor. 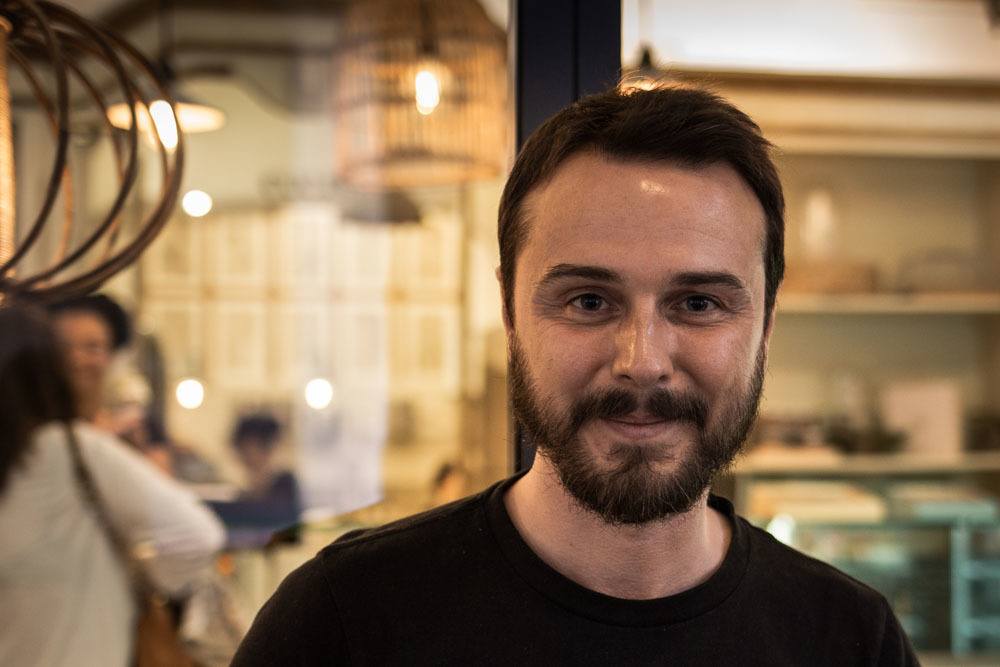 Mattia Cavalleri creates world-class gelato at Cremeria Santo Stefano in Bologna. The soft-spoken owner is a master of the gelato arts.

We also love the shop’s chic style with its displays of dried flowers and herbs adding colorful design elements to an old-fashioned, turn of the century storefront. Don’t be surprised when you visit Cremeria Santo Stefano as sometimes the line winds around the block. Trust us – the line will move quickly and you will be happy you waited.

Pro Tip: Peek inside the gelateria’s laboratory to see where the magic happens. 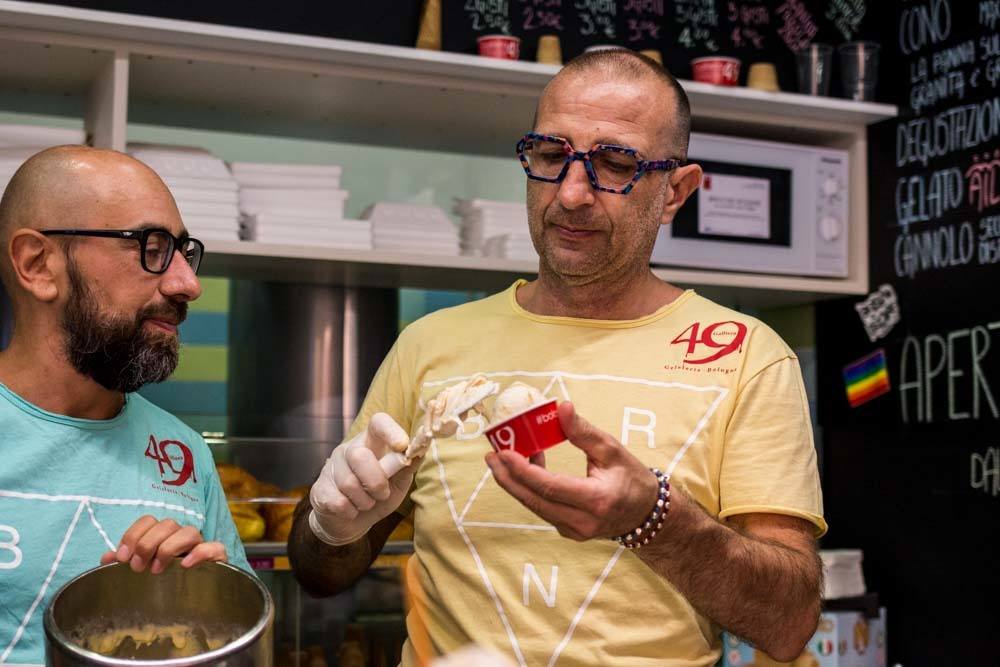 The four owners of Galliera 49 pack gelato into environmentally sustainable cups with care despite the nonstop lines of hungry gelato eaters. Two of the owners engaged with customers and gave gelato advice during our visit.

Plan to be patient since Galliera 49’s counter is always filled with customers clamoring for the edgy gelateria’s artisanal gelato made with fresh milk and fair trade cane sugar as well as Sicilian-style granitas loaded with fresh fruit. Like the best things in life, this gelato is worth the wait.

Though several locals recommended Galliera 49 to us, we weren’t convinced of its excellence until our second visit when we tried the shop’s Cuba gelato made with dark chocolate and sour cherries. We became fans and repeat customers after one bite of the addictive concoction.

Pro Tip: Ask for whipped cream on top of your gelato, sorbet or granita. Servers provide the tasty topping on a complimentary basis at Galliera 49. 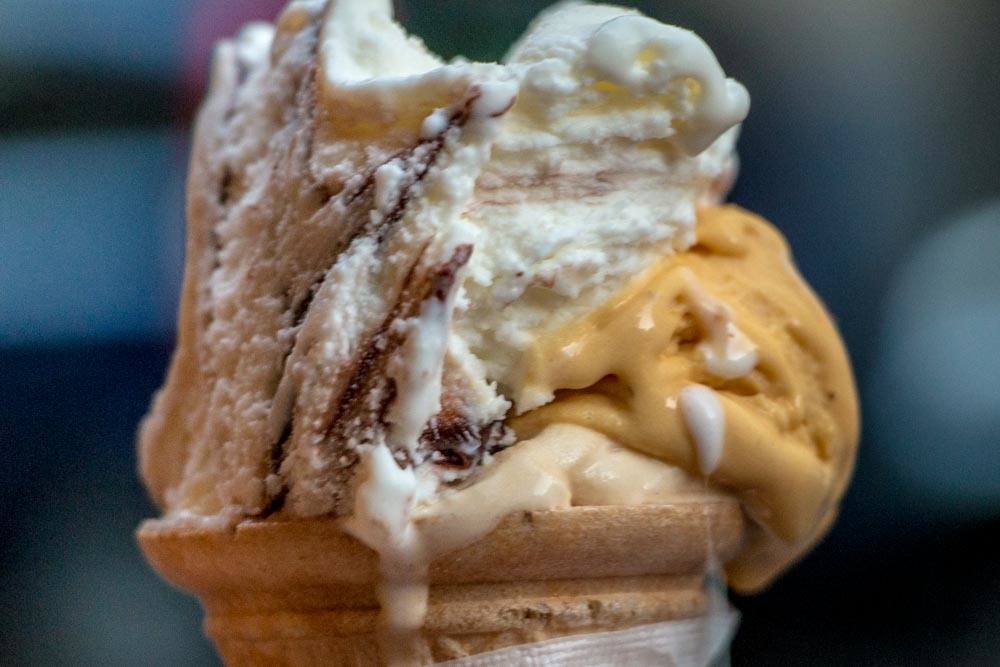 Small cones of gelato come with two flavors at La Sorbtteria Castiglione, which means you don’t have to pick just one.

Our memory of eating gelato at La Sorbetteria Castiglione became legendary in our minds.

We ate there during our initial Bologna visit in 2010 and memories can be a tricky thing. We feared disappointment during our return visit to the stalwart Bologna gelateria, but we’re pleased to report that the gelato quality has not deteriorated over the years – the gelato is just as pure and creamy as we remembered.

The Dolce Michelangelo with cream of almond and caramelized almond is the shop’s most popular flavor, though the Dolce Emma with fresh ricotta, eggs and caramelized figs is our favorite so far. We’ve since returned multiple times to be sure, always eating our cones under an ancient portico as one does in Bologna.

Pro Tip: Don’t be afraid to order gelato if you have special dietary requirements. La Sorbetteria Castiglione has Gluten-Free gelato as well as options for vegans and guests with allergies.

This brioche con gelato with a scoop of Cuba gelato and a scoop of Pistacchio di Sicilia gelato at Stefino Gelato Biologio may be the tastiest sandwich we ate in Bologna.

Gluten and Free aren’t words that usually attract us to desserts, but we gave the gelato at Stefino Gelato Biologio a try during our Bologna pasta making class. Stefino delivers fresh gelato to local customers in 35 minutes or less for those who don’t want to wait in line.

We later visited the gelateria and ate a treat called brioche con gelato – two scoops inside a house-made brioche roll. Since the certified organic gelateria’s gelato is low in both sugar and fat, we like to think the calories evened out. We’re sticking to this story. 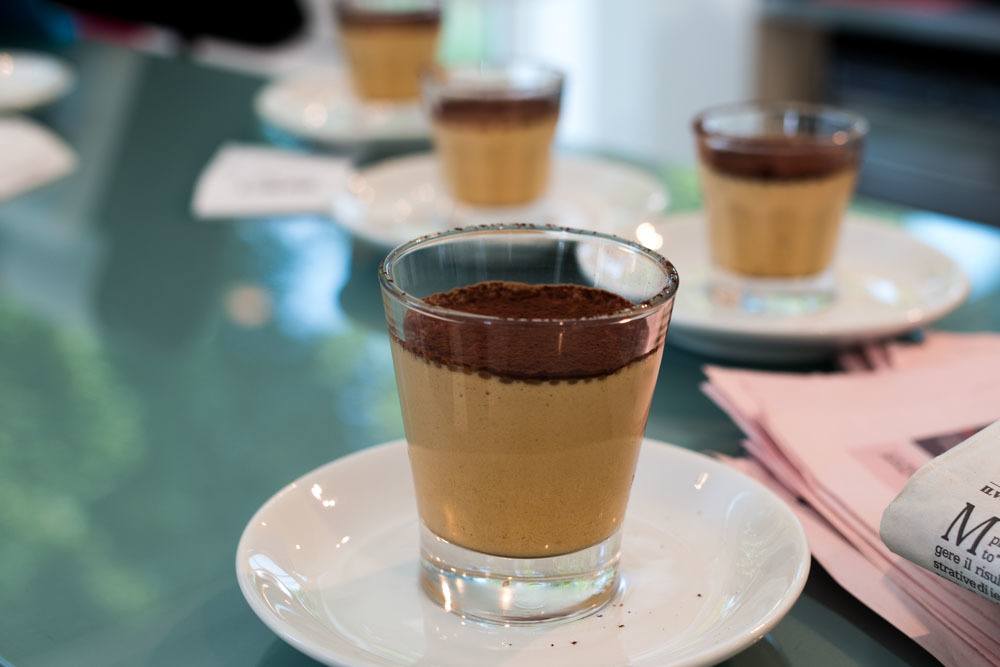 Gelateria Carpigiani continues to push the envelope with new flavors and products like the espresso pictured here.

Did we mention that we’re now trained gelato experts? Though that claim is a bit of a stretch, we are smarter about making gelato after taking a Discovering Gelato class at Carpigiani Gelato University just outside of Bologna.

Designed for gelato enthusiasts, this light-hearted class celebrates Italian ice cream in all of its creamy, dreamy glory. The university also teaches more extensive classes for global students who journey to Bologna to learn how to make the best gelato in the world for business purposes.

During our class, Maéva Noël guided us through the history of gelato through the centuries before teaching us how to make artisanal Carpigiani gelato from scratch. As fun and informative as the class was, the best part was eating the resulting gelato and sampling other flavors in Caprigiani’s gelateria.

Watch our YouTube video to see what it’s like to learn how to make gelato at Carpigiani’s Discovering Gelato class.

Gelateria Carpigiani is located at Via Emilia, 45/B, 40011 Anzola dell’Emilia BO, Italy. 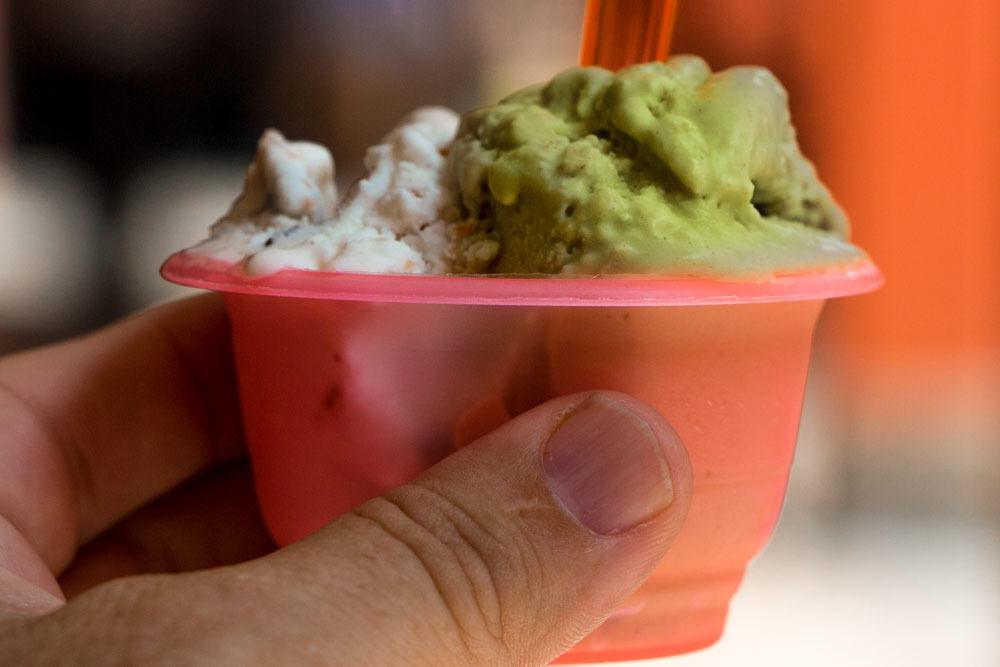 The gelato at Il Gelatauro was so fresh that the flavors like ginger and pistachio popped in our mouths.

A favorite of noted food author and blogger David Lebovitz, Il Gelatauro is a bit off the tourist trail. We almost skipped this gelateria since it was a long walk from our Bologna apartment, but we’re glad we made the extra effort with two days to spare.

Despite its traditional atmosphere, the team at Il Gelatauro uses organic ingredients like Australian ginger and Bronte pistachios. Wherever possible, this Bologna gelateria sources ingredients at local markets for maximum freshness. The end result is some of the best gelato in Italy. 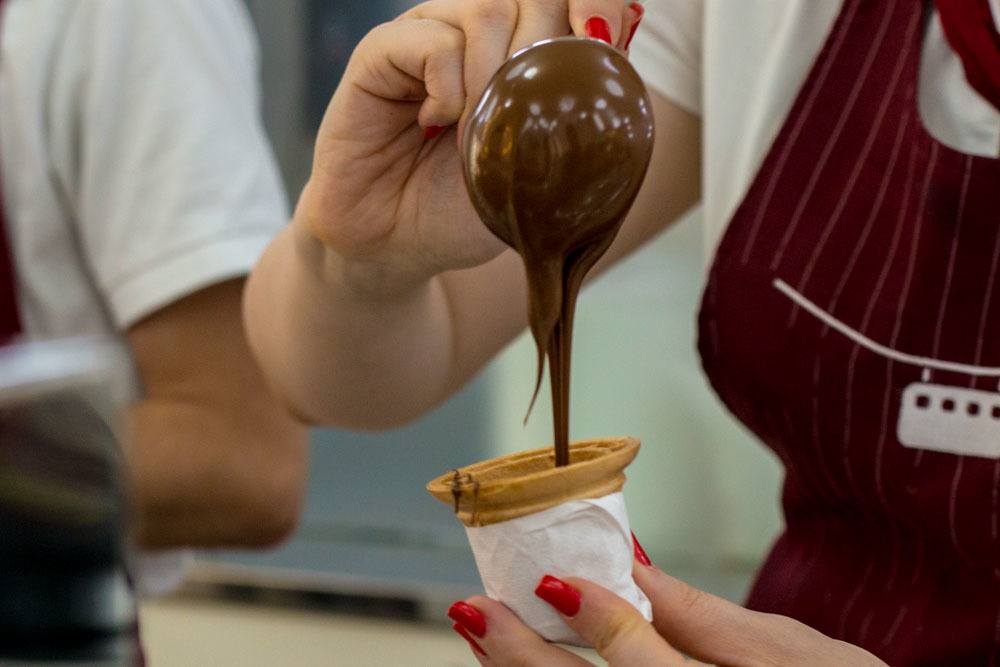 We practically drooled while watching the chocolate drizzle into this cone at Cremeria Funivia.

Named after a cable car station next to its original location, Cremeria Funivia puts the fun into gelato by adding chocolate sauce to the bottom of some of its cones. The artisan gelateria also creates gorgeous cakes for those looking for more than ice cream.

We loved their Alice cone with mascarpone gelato and melted dark chocolate. This flavor alone warrants a special trip.

If seven gelaterias aren’t enough to satisfy your sweet tooth, check out the following spots for more gelato love:

The Best Gelato in Modena 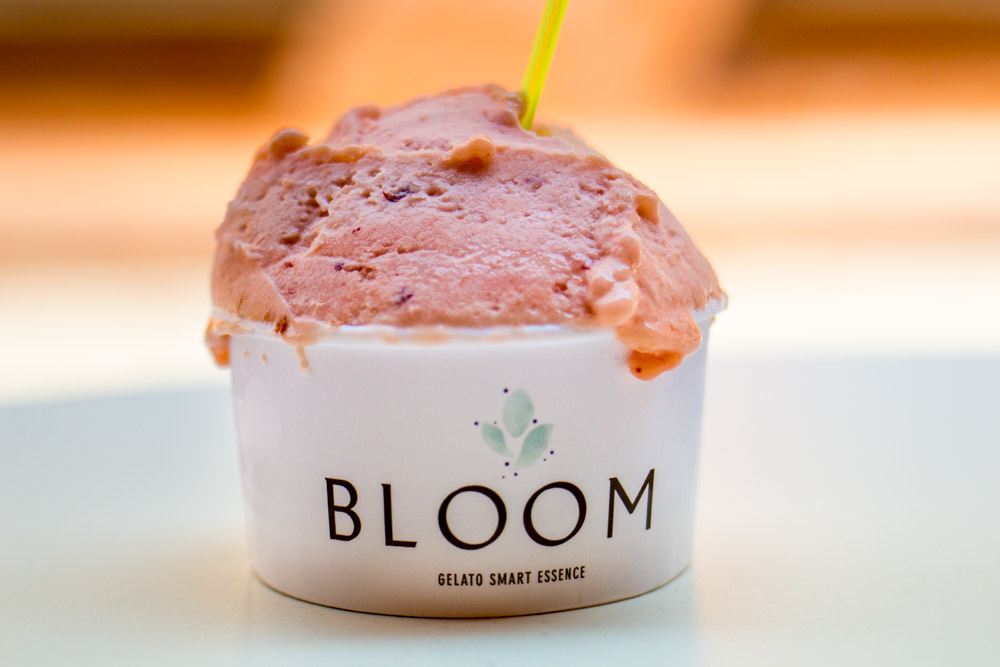 “[There was] an American guy walking in Vignola thinking about Milan.” Actually, we’d like to know the story here since that was the name of a gelato flavor (peanut butter, Vignola sour cherries and bitters) we ate at Gelateria Bloom in Modena.

Despite its unique flavors combinations and intriguing gelato names, Gelateria Bloom excels with simple flavors like pesca (peach) made with pure ingredients and without additives. As an extra bonus, the gelateria has a delightful bleach-white decor that’s ideal for taking Instagram photos.

Pro Tip: Add Bloom to your Master of None tour of Modena. This gelateria was one of several locations featured in the Netflix cult hit TV show’s second season.

The Best Gelato in Parma 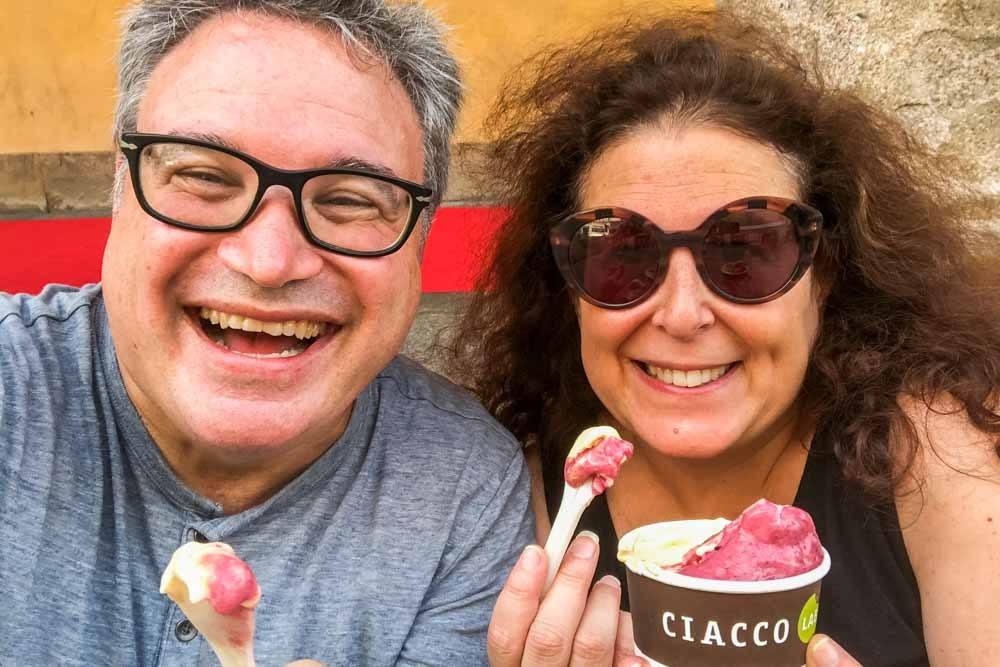 Another short train ride from Bologna will take you to Parma where you can easily eat your weight in cheese, meat and gelato. We ate this gelato at Parma’s Ciacco Lab.

Ciacco Lab’s owner, Stefano Guzzetti, takes gelato seriously by using the best available local and seasonal ingredients. His reward is a ‘three cones’ designation from Gambero Rosso. For food travelers, the reward is gelato worthy of a special trip.

Pro Tip: Ciacco Lab has tempting dairy-free options for those who follow a lactose-free or vegan diet.

The Best Gelato in Reggio Emilia 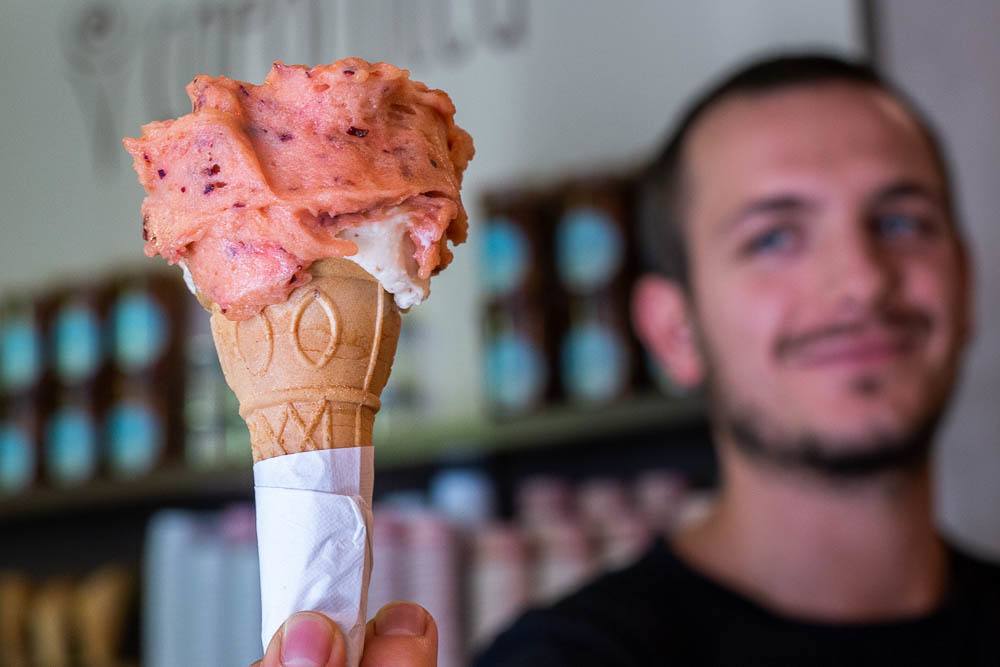 Eating at Cremeria Capolinea poses a challenge – narrowing down the choices from 24 seasonal flavors created in the gelateria’s upstairs laboratory. These flavors represent the best of Emilia Romagna, with most ingredients directly sourced from local farms using a ‘zero kilometer’ approach.

Owner and former computer scientist Simone De Feo makes gelato magic without using any artificial ingredients or emulsifiers. During our visit, we sampled a range of his sweet and savory flavors before ordering a cone topped with scoops of Robiola Cheese Pear and Prune gelato. Bliss on a cone!

Pro Tip: Don’t hesitate to order a sweet treat to go with your gelato. You can choose from options like panettone, muffins and cookies.

Hungry for more gelato? Check out our gelato guides for Venice and Verona for tips on where to eat the best gelato in these Italian cities.

Have we convinced you to visit Bologna and eat gelato? Click here to research hotels in Bologna.

Or, if you prefer to have access to a kitchen, click here to find an Airbnb apartment. 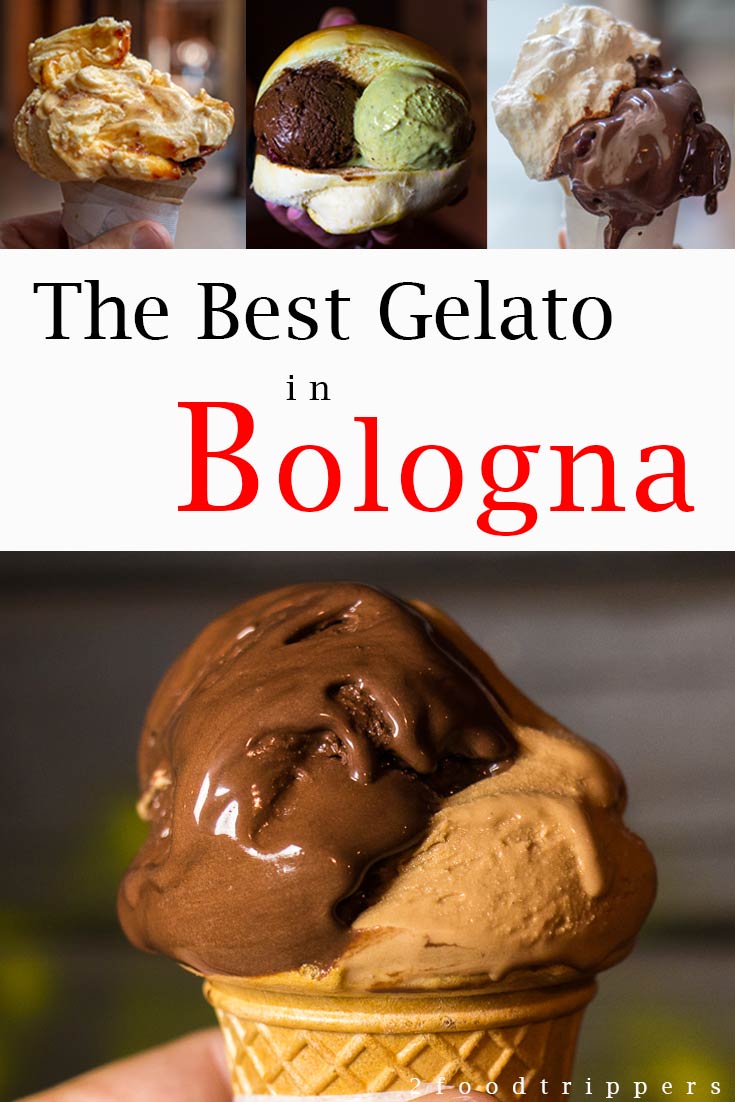 We thank Emilia Romagna Tourism for hosting us during our participation in the Blogville project in collaboration with iAmbassodor. We also thank Bologna Welcome for inviting us to join their Bologna Between the Porticoes and Gelato tour. 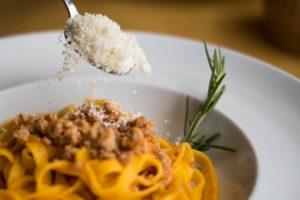 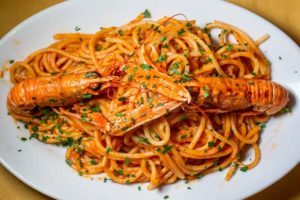 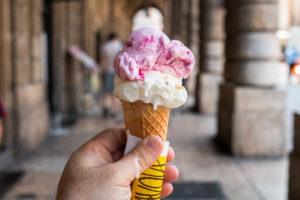