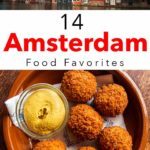 Are you wondering what to eat in Amsterdam during your first trip to the DAM? Read on to discover fourteen must-eat Amsterdam food favorites that you simply should not miss during your trip to the canal-filled Netherlands capital city.

Amsterdam is a charming Dutch city known for flowing canals, colorful tulips and wooden clogs. It’s also a city where it’s possible to spend days strolling along waterways and visiting iconic sites like the Anne Frank House, Rijksmuseum and Van Gogh Museum. But what about the food in Amsterdam?

Finding the best Amsterdam sites isn’t challenging for those with a plan, but even intrepid travelers often find it difficult to find great food in Amsterdam. Let’s face it, the city has an ample number of touristic eateries serving hamburgers and pizza.

Amsterdam is a great city to eat Dutch food and global cuisine between sightseeing and other extracurricular activities. The city has restaurants and snack shops serving a variety of tasty food at all price points.

Perhaps you’re unfamiliar with the city’s food scene or maybe you’re visiting Amsterdam for the first time. If you fit in either category, we recommend starting your culinary exploration with the following Amsterdam food favorites:

In Amsterdam, crispy meatballs called Bitterballen are the go-to snack at bars around the city. Since most travelers visit at least one bar in Amsterdam, eating Bitterballen is almost inevitable when visiting the DAM. But, you may be wondering, what are Bitterballen?

The Bitterballen recipe is fairly straightforward and can be completed in a few steps. First, Dutch chefs slow cook meat and refrigerate the resulting stew until it solidifies. They then form the meat mixture into little balls, bread them and fry them to crispy perfection.

Eaters get the better end of the stick, or in this case ball. Plan to eat Bitterballen with your fingers, dipping each round nugget into spicy mustard before popping it into your mouth. Just be careful not to burn your tongue.

Where to Eat Bitterballen in Amsterdam
Bars like Eetcafé Rosereijn

Unlike their fluffy American cousins, Dutch pancakes called Pannekoeken are flat, savory and fill the plate. Locals eat Pannekoeken at all times of the day, often topping the starchy base with cured meat or smoked salmon. However, some Amsterdammers prefer to add fruit or chocolate to create a sweet dessert pancake.

You’ll find Pannekoeken on the menu at local eateries like Eetcafé Roserein as well as at more touristic spots like Pancakes Amsterdam. If you’re short on time and keen on trying Pannekoeken, you can even take a River Cruise with an all-you-can-eat Pannekoeken bar.

Add powdered sugar and Stroop to your Pannekoek. Thicker than maple syrup with a consistency more similar to caramel, Stroop adds a sticky sweetness that completes the Pannekoek eating experience.

Where to Eat Pannekoeken in Amsterdam
Eetcafé Rosereijn and Pancakes Amsterdam

If Bitterballen is the most popular bar food in Amsterdam, then pickled herring sandwiches win the prize when it comes to street food. Locals stop at fish stands called haringhandel to order herring sandwiches called broodjes haring all year long but especially in the summer when it’s herring season.

Stroopwaffels take the cookie concept to the next level by filling two thin wafers with sweet Stroop, the same caramel-like syrup that goes well with Pannekoeken. Originally invented in Gouda but perfected in Amsterdam, Stroopwaffels are best eaten hot off the griddle.

Be sure to pair your hot Stroopwaffel with hot coffee or tea. Not only is this the traditional way to eat Sroopwaffels, but it’s also the best way. You’ll know what we mean once the steam from your drink hits the Stroopwafel. The reaction is magical.

Sweeter than Pannenkoeken thanks to generous amounts of powdered sugar and butter, miniature pancakes called Poffertjes are a popular snack available at stands around Amsterdam. Dutch cooks prepare Poffertjes batter with buckwheat flour before frying the petite treats to crispy goodness.

You can add toppings like Nutella and syrup to your Poffertjes if you’re so inclined. Keep in mind that most locals stick to powdered sugar and butter, but it’s up to you.

True confession: We never heard of Stamppot (mash pot) until we visited Amsterdam. Always game to sample new food, we gave Stamppot a try. We loved the mashed-up mix of vegetables, potatoes and butter. Dutch cooks traditionally add kale or swiss chard, but more modern renditions include other greens like tarragon.

You can eat Stamppot as a comforting side dish or pair it with sausage for a complete Dutch dinner. Though it may be a challenge, try to save room for dessert.

With a history that dates back to the 17th century when the Dutch colonized Indonesia, Rijsttafel is a veritable rice feast that spans the gamut of Indonesian cuisine. A Rijsttafel meal involves a colorful parade of little plates that fill the table first and the belly later. In fact, the Dutch word Rijsttafel translates to ‘rice table’.

Enlist as many friends as you can so that you can try dozens of dishes. Expect flavors to hit all notes from sweet to spicy in a feast filled with meat, fish or vegetables. Just don’t expect to eat Rijsttafel everywhere in Indonesia. The 20th-century incarnation is decidedly Dutch.

Where to Eat Rijsttafel in Amsterdam
Restaurant Blauw and Sama Sebo

Although Holland is famous for Gouda and Edam, both made with cow’s milk, Dutch dairy farmers produce enough cheese products to fill a cheese plate and then some. Amsterdam cheese shops sell these cheeses and more, though true cheeseheads will want to take a day trip outside Amsterdam to experience a cheese market that dates back to the middle ages.

Start your Dutch cheese exploration with the mass-produced classics – Gouda and Edam. You can attend a cheese tasting to explore different flavors by sampling different ages from four weeks to a year or two. You can then move on to lesser-known varieties like Maasdammer, Boerenkaas and Schapenkaas. You’ll get extra points if you can pronounce the Dutch cheese names correctly on the first try.

No longer relegated to Sundays, brunch occurs on a daily basis in Amsterdam. Local restaurants serve pancakes (both Dutch and American style) as well as eggs, omelets and more exotic fare like avocado bowls and dim sum dumplings.

And the best part, you don’t have to wake up early since some of the best Amsterdam brunch spots serve the meal all day long.

Plan to eat brunch before or between sightseeing expeditions. Between the food and the coffee, you’ll be fueled up for a day of cultural exploration.

Where to Eat Brunch in Amsterdam
Gartine, Little Collins and Dignita

Although the distance from Amsterdam to Hong Kong exceeds 5,700 miles, dim sum is a popular cuisine in Amsterdam. More than a dozen local restaurants serve the fun style of Cantonese cuisine known for steamed dumplings and other savory treats.

You can eat dim sum in the center of Amsterdam, outside the ring, at the Foodhallen or within a restaurant the looks like a floating pagoda. Grab your chopsticks, order a pot of jasmine tea and get ready to chow down on dim sum in Amsterdam.

Where to Eat Dim Sum in Amsterdam
Sea Palace, Oriental City and One Dim Sum

Fried potatoes are popular around the world from french fries in New York to chips in London to pomme frites in Paris. This popularity has not escaped Amsterdam where locals eat cones of friets topped with mayonnaise and other saucy toppings made with ingredients like ketchup, curry and peanuts.

Plan to eat friets as an afternoon snack or after a night at the bars. Pick your toppings while you wait in an inevitable queue. Don’t worry – your cone of crispy fried potatoes will be worth the wait.

Leave your impression of apple pie at home when you visit the Netherlands. Available in restaurants and cafes through Amsterdam, the appeltaart is notable for its crunchy crust and a chunky apple filling flavored with spices like cinnamon cardamom and nutmeg.

→ Discover the best desserts around the world.

You’ll want to eat an iconic appeltaart at Winkel 43, the Amsterdam institution located on the bank of the Westerstraat canal. Be sure to order a slice with a dollop of whipped cream for the full Amsterdam apple pie experience.

Where to Eat Apple Pie in Amsterdam
Winkel 43

Amsterdammers have been drinking Genever since the 16th century. Originally prescribed for medicinal purposes, Genever is now a popular juniper-flavored spirit similar to Gin. Locals drink Genever at bars as well as at distillers like the House of Bols.

Go to a traditional Amsterdam Genver tasting room to drink Genever. Cross your hands behind your back and bend over to take the first sip. After the first sip, whether you hold the glass is up to you.

As cool as it is to drink Genever in Amsterdam, sometimes beer is the better beverage option. Famous for commodity beers like Heineken and Amstel, Amsterdam has joined the craft beer scene with a vengeance and now has a multitude of worthy drinking establishments for those times.

Sure, you can spend a couple hours on a Heineken experience but why not spend that same time at Brouwerji ‘t IJ drinking craft beer inside a repurposed windmill. You can continue your beer-drinking escapades at Foeders and Craft & Draft – both bars serve a wide selection of Dutch and Belgian brews.

Where to Drink Beer in Amsterdam
Brouwerij ‘t IJ, Foeders and Craft & Draft

Hungry for More Food in Amsterdam?

Great article, one correction. It's stroopwafels, not stroopwaffels. Also, not friets but patat friet. The rest is spot on.

It might be helpful to point out that Dutch appeltaart is very filling so it's best to order it as a midmorning or midafternoon snack with coffee. An American like myself (ahem) might make the rookie mistake of ordering it for dessert! "Dessert" as an idea for typical Dutch people is a cup of yogurt or pourable pudding after a meal for a little "toetje" ("a little something sweet.") At restaurants, ice cream is a popular dessert, or try a plate of mixed mini-desserts...these are not only beautiful but absolutely lekker (delicious, yummy)!

Just one little comment on your rijsttafel item; you can definitely find rijsttafel in Indonesia. It's even called the same 😀